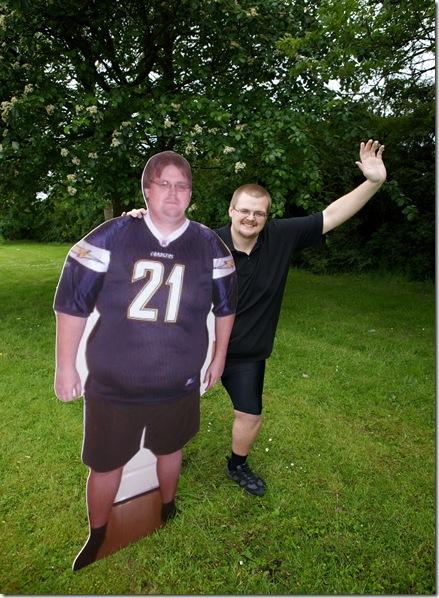 "Without question, cycling saved my life"...
by Tom Henry

A year ago, Gary Brennan was 39 stone and was in such poor health that only a gastric bypass operation would rescue him from disaster.

The 28-year-old, from Hyde, Greater Manchester, had diabetes and high blood pressure. His waist measured 68 inches and he wore 26-inch collar shirts. He knew something had to be done.

But instead of going under the knife, he got on a bike. And while he thought he looked ridiculous, and that he could buckle the frame at any moment, Gary persevered.

A year and 2,000 miles later, Gary has lost 17 stone, the gastric band operation has been cancelled and he says that cycling has saved his life.

He hasn’t undertaken any special training or pushed himself over hill and dale. All he has done is commute to work, 14 miles a day.

As part of Bike Week 2009, Gary has come forward to preach the cycling message to others who may feel they need a good dose of exercise. He’s helped promote Manchester’s Bike To Work campaign via the newspapers and local TV.

He said: "The first time, I was really scared the bike would just give way under me and I felt exhausted after just one mile.

"It was painful, it was tiring, and it was pretty embarrassing as well, to be honest. A guy of my size trundling down the road at 10mph is never going to be a pretty sight."

"Without question, cycling has saved my life," he added. "If I hadn't started getting on the bike to work I wouldn't be here now. I feel amazing now - my health problems are gone and I can do so much more."

Recently, Gary replaced his old mountain bike with a Trek 6300 and swapped its Nimbus tyres for City Jets, which he says are a vast improvement.

He is now in training for the annual Manchester-Blackpool bike ride event on July 12 which he's doing to raise money for Christie Hospital. In the future, he says, his goals include completing on Olympic distance triathlon and an Ironman challenge.