Plans for London's Olympic Velopark were today officially submitted for planning approval. The Velopark is the capital's cycling legacy from the Olymipics includes plans for a mile long road cycling circuit, plus eight kilometres of mountain bike trails and a world class BMX circuitl. The latest version of the plans were first unveiled at a public meeting last month.

Along with the planning application the Olympic Park Legacy Company (OPLC) have released CGI images of what the facilities will look like upon completion. The shots we have really only show the road circuit and the BMX track the MTB circuit is slightly to the north ot the BMX track and runs under the A12 in into Eton Manor on the other side. 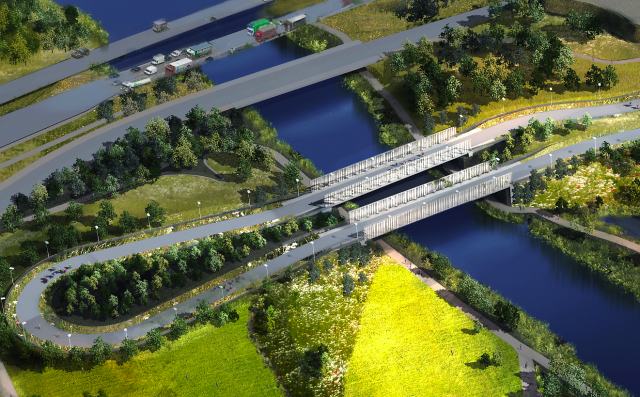 Welcoming the new plans Ian Drake, Chief Executive of British Cycling said:
“We’re delighted to lend our support to the plans which, if passed, will provide a yet another fantastic facility for cyclists. Such facilities are essential if we’re to continue to attract more people to the sport and this will be a legacy from 2012 in which we can all take great pride.”

While Shaun Dawson head of the Lee Valley Regional Park Authority which will have responsibility for the park said:
“This is a significant step forwards for Lee Valley VeloPark which we are confident will become the finest hub for cycling in the world with four disciplines on offer to cyclists of all levels.

“We’ve already put in the foundations to ensure Lee Valley VeloPark will be busy 52 weeks a year delivering a solid cycling legacy to the whole community – clubs, schools, elite cyclists and spectators.”

While some small design details from the plans show to the public have changed an OPLC spokesperson told road.cc that the design hasn't changed significantly. The submitted plan has taken on board concerns raised about the level of difficulty of the BMX track which will be re-graded after the Games to bring it to more of a level suitable to the skills of the riders that will be using it. It's fair to say that last month's public unveiling brought a positive but still mixed reaction from the cycling groups represented at the public meeting. While the Eastway Users Group said they were broadly satisfied with the road circuit, and their concerns about the BMX track have now been met, their main difficulty was with the open access to the mountain bike trails. That is still likely to be a live issue - the OPLC say that the public access path running through the mountain bike area will have barriers on it - presumably to stop people bringing in moto-cross bikes and will have warnings painted along it. We were told that further design options would be explored to make it as safe as possible. At the end of the day the Olympic Velopark which is just one part of the even larger Queen Elizabeth Olympic Park is always going to have to live with the competing tensions inherent in the Olympic Park's remit to both provide an Olympic cycling legacy and new leisure amenities, parks, and housing for the residents of the London boroughs - some of the most deprived in the capital - which border it.

The plans will be open for statutory consultation until the 11th of January with a planning decision expected some time in March. Work on delivering the new Velopark will commence once the 2012 Olympic Games are over and it is expected to open in 2013.

The plans can be viewed at www.london2012.com/planning