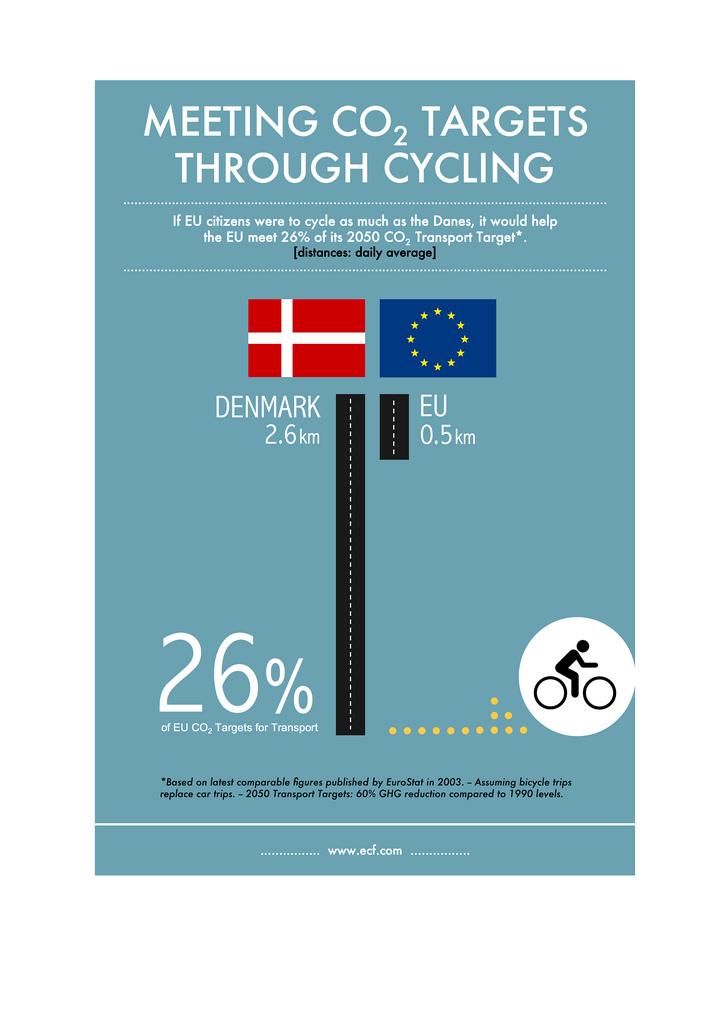 The European Cyclists’ Federation (ECF) says that if levels of cycling throughout the European Union (EU) were the same as those seen in Denmark in 2000, the EU would be able to satisfy more up to a quarter of the reduction in greenhouse gas emissions that it is aiming to achieve by 2050.

The finding comes in a report published by the ECF called Cycle more often 2 cool down the planet! Quantifying Co2 savings of cycling, and follows a recent announcement by the European Environmental Agency that technological advances and improvements to technology on their own would not enable the EU to meet the 60 per cent reduction in greenhouse gas emissions that it has targeted.

The ECF compared cycling on pedal cycles with other forms of transport including electric-assisted bikes, buses and cars, and found that once the impact of production and maintenance as well as fuel – food, in the case of cyclists – was taken into account, cycling produced emissions that were ten times lower than those resulting form the use of cars.

As a result, if citizens throughout Europe cycled the same distance each day as the average Dane did in 2000 – 2.6 kilometres – the EU would be able to meet up to one fourth of its greenhouse gas emissions reduction target by 2050, says the ECF.

The actual percentage varies between 12 per cent and 26 per cent depending on the mode of transport replaced, with switching to bikes from private cars representing the largest potential gain.

The report’s author, Benoit Blondel, Environment and Health Policy Officer at the ECF, said: “Cycle 5kms a day and we reach 50% of the target. The potential for cycling to achieve these targets is huge. And with such little effort. Getting more people on bikes is going to be a lot cheaper than say getting more electric cars on the road”.

According to the ECF, among the key findings of the report are:

Last week, it was announced that CTC chief executive Kevin Mayne would be leaving to join the ECF as Director of Development.