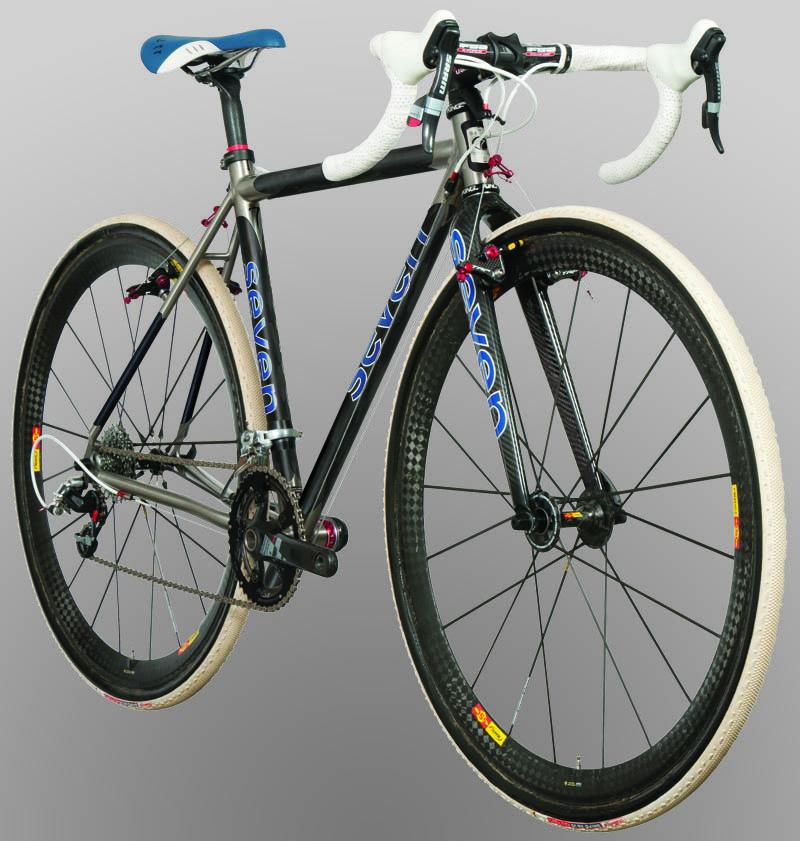 ...and this is the top end of 'top end' we're talking about here
by dave atkinson

If you've been saving up all summer to buy a new 'cross frame then look away now, because you didn't save enough. Seven Cycles have unveiled their new Mudhoney Pro frameset and there's plenty of mouths agape in the road.cc office, both from the shininess of said steed and - dear God - the price.

The Mudhoney Pro is an evolution of the roadgoing Elium SLX frameset, and shares the same construction method, namely filament-wound Carbon tubes bonded into ultra-butted Titanium lugs. That gives the best combination of shock damping and frame weight, say Seven, and it also means that the geometry is fully customisable, so you can be sure it'll fit you like a glove. All the tubes are Carbon save for the chainstays, which means there's more of the black stuff than on the Elium which has a metal down tube.

Needless to say, the top-drawer materials and custom build mean it's designed to perform at the highest level. The bike has already been piloted to top 20 finishes in World Cup events by Maureen Bruno Roy and it's the lightest 'cross frame Seven have ever produced at 2.9lb (1,315g).

Top drawer materials and custom building don't come cheap though. We're used to seeing big numbers attached to boutique frames but even so there was plenty sucking of teeth when we discovered that owning the Mudhoney Pro will require you to part with the lion's share of £5,000. You'll still have enough left for the bus home, assuming it's not a very long bus journey that costs more than £25.

Four thousand, nine hundred and seventy five pounds then. And that's just the frame; you want forks as well, you say? Those will be another £540. Thank you very much. Have a nice day.