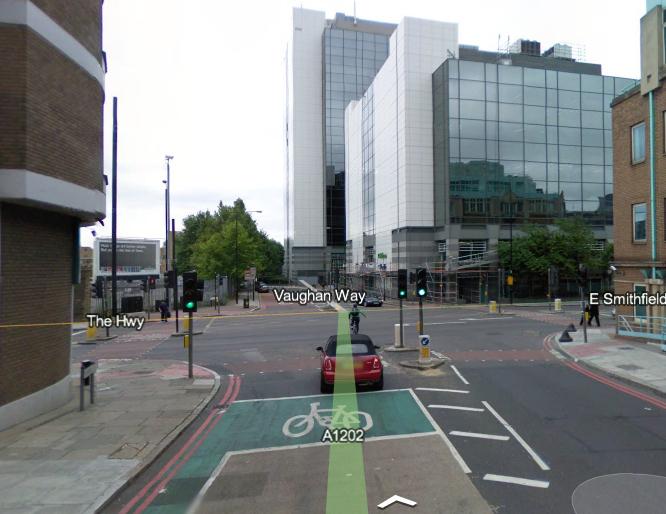 Junction of Dock Street and The Highway (Google Maps)

Media giant takes action after journalist injured, as safety of bike riders in London comes under increasing scrutiny
by Simon_MacMichael

Media giant News International has said that it plans to speak to both the Metropolitan Police and the Mayor of London’s office regarding improving safety at a junction close to its Wapping site where a female cyclist who works as a journalist on one of its titles was seriously injured after being hit by a lorry last Friday. The news comes as cycle safety continues to move up the political agenda in London ahead of next year’s mayoral elections.

In a statement released to Danny Williams, who writes the Cyclists in the City blog, the media group said that this was not the first example of one of its employees being involved in an incident of this type at the location in question, at the junction of The Highway and Dock Road.

The latest incident happened just before 7am last Friday morning, and resulted in a 27-year-old female journalist working on The Times being taken to the nearby Royal London Hospital with what were described as “life threatening” injuries after being involved in a collision with a lorry.

The East London Advertiser reported that the cyclist had received serious injuries to her legs, arms and pelvis, adding that the police had arrested a lorry driver in connection with the incident.

We’ve asked the Royal London for an update on the cyclist’s condition and, patient confidentiality rules permitting, will update on that as soon as we can.

The statement received from News International by the Cyclists in the City blog, which is organising this weekend’s ride around the ten most dangerous junctions for cyclists in London, says:

"Many of our staff cycle to work and we advise them to take great care in doing so. The company's staff newspaper We're News carries regular articles on the need for vigilance by our cyclists because this is not the first such accident involving a member of staff. Following the horrific injuries suffered by a member of our staff last week, we will be talking to both the police and the Mayor's office to see whether safety for cyclists at that particular junction on The Highway can be improved."

In September, News International announced that it planned to sell its Wapping site, with all of the editorial and commercial staff formerly based there due to have moved to its new site across the road at Thomas More Square by the end of the year.

The proximity of the two locations means that employees including those who cycle to work will continue to commute along the same routes as previously.

As Cycling in the City points out, this is a call to improve road safety for cyclists at a specific location, moreover one that comes from an organisation that owns one of the country’s most influential newspapers, The Times.

Nor is it an isolated appeal, with the blog highlighting several other instances of Transport for London’s attention being drawn by local councilors and residents’ groups throughout the capital to specific instances of cyclists being put at risk.

News of this latest incident follows a month in which two cyclists in London died as a result of being hit by lorries. In early October, 24-year-old student Min Joo Lee (known as Deep Lee) was killed after being crushed beneath the wheels of a lorry at Kings Cross; then, a fortnight ago, 58-year-old Brian Dorling died when he was struck by a tipper lorry at the junction of Bow Road and Payne Road.

Those tragedies and other similar incidents, plus other road safety issues such as the ongoing controversy regarding Blackfriars Bridge, mean that the safety of cyclists in London is perhaps higher than ever before on the capital’s political agenda with less than six months to go until the London Mayoral Elections on 3 May 2012.

Certainly, there does seem to be a real grassroots momentum building to urge TfL and Mayor Boris Johnson to address the issue, helped by the ongoing efforts of organisations such as the London Cycling Campaign (LCC), high-profile bloggers, the rapid spread of information through social media, and increased coverage of cycling issues in the capital through mainstream media outlets including The Guardian and the London Evening Standard.

London politicians, too, have been active in urging for safety to be improved. Jenny Jones, the Green Party’s candidate in next year’s mayoral election, is a vociferous campaigner on the issue, and within the Greater London Assembly, politicians of all parties earlier this year supported a petition from LCC to require all lorry drivers in London to undergo cycle awareness training.

Labour’s Catherine West, leader of Islington Council and also Chair of London Councils’ Transport and Environment Committee, wrote in the Islington Tribune last week: “Mr Johnson needs to get a grip on his day job and take action to keep these new, and often inexperienced, cyclists safe. Take the dangerous King’s Cross gyratory where Deep Lee lost her life. Transport for London was warned back in 2008 that ‘casualties were inevitable’ at the junction of Gray’s Inn Road, York Way and Pentonville Road.

“Yet three years on nothing has changed. The Conservative Mayor controls TfL. Where has he been and why isn’t he standing up for people’s safety? ...Too many cyclists are dying on our roads each year. People have to become the priority."

Ms West revealed that she had written to TfL to ask that Cycle Superhighway 12, scheduled to run through the borough along the route of the A1, should be more than just a painted “blue band” on the road.

“I want to see the dangerous Archway gyratory removed, trixi mirrors at all junctions where left-turning vehicles can threaten cyclists and cycle symbols in bus lanes so cyclists position themselves correctly and can move more easily into the general lane of traffic,” she explained.

Meanwhile, in a letter to the Camden New Journal, Liberal Democrat councillor Paul Braithwaite, the London Borough of Camden’s cycling champion, outlined a number of issues of grave concern in that borough, including “the recent new two-way traffic working on Russell Square, which daily puts hundreds of cyclists at grave risk in the south east corner.”

"I think it is well justified that a case of corporate manslaughter is now being considered over [Deep Lee’s] death at King’s Cross on October 3,” he wrote. “I really believe we need something of that magnitude to get through to TfL’s high command.”

After giving specific examples of perceived road design defects “that I’ve been fighting, for years, in vain to remedy for cyclist safety,” he added: “In not one of the above examples has TfL actually made any of the improvements that have been agreed to be necessary."

We will of course be continuing to focus on these issues as the elections approach but in the meantime, if you do live in London, you can help play your part in ensuring that cycle safety remains front of mind by supporting initiatives such as this Saturday’s ride and by questioning the politicians who will be after your vote next May about where they stand on the issue.