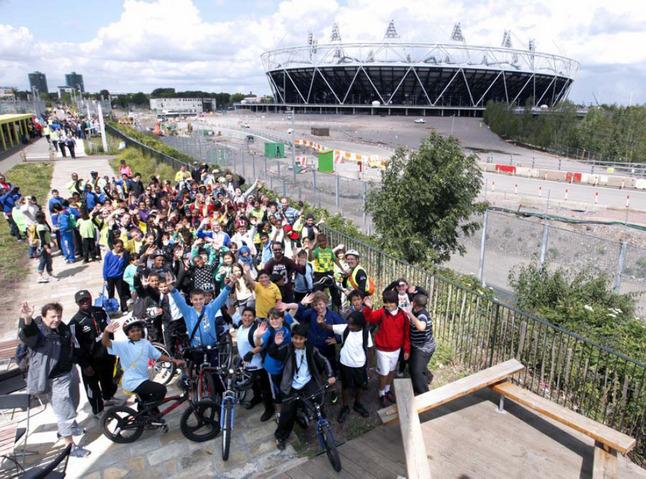 Shortlist shows off just how varied and vibrant London's cycling culture is...
by Tony Farrelly

The London Cycling Campaign has announced the shortlist for its London Cycling Awards 2011, nominees include a suspended towpath under Bow Flyover, a bike ride that took over 100 schoolchildren across Hackney to the Olympic Stadium, the shortlist also pits two London bloggers against a "ruthless" operator from Tower Hamlets for the Campaigner of the Year Award. The winners will be announced on 16th of November

You can read the full shortlist below but to give you a quick flavour amongst those up for awards are Agewell on Wheels a project to help older people in nine London Boroughs either get in to or get back in to cycling; Hackney Bike Breakfasts – which our own TR McGowran has been involved with (anything for a free bowl of porridge) which brings the biker's breakfast to schools in, you've guessed it, Hackney.

In the Best New Cycling Facility the much admired, and in terms of cycling projects - relatively expensive, floating towpath under Bow Flyover is up against two elegant cycle parking and storage solutions both in Lambeth, the Lambeth bike boxes – which we reported on recently, and Cyclehoop's on street cycle parking with a message 1 car space = 10 bicycles, we've got something similar in Bath, but you can fit more bikes in it… mind you it's probably a bit bigger too.

All of the nominated events in the Cyle Events of the Year category are worth celebrating, the Battersea Artists Trail Bike Tour - does what it says on the tin really, Bike across the Borough which took Hackney school children on a ride across the bourough to the Olympic stadium and the Havering Bikewise event which demonstrated the pent up cycling demand in London's suburbia by attracting 4000 people.

Another category to catch the eye is the new for 2011 Cycle Campaigner of the year, in that two London bloggers Charlie Holland who campaigned for the overturning of the ban by Lambeth Council on a section of the Thames Path, and Danny Williams the man behind the Cyclists in the City blog are up against the “persistent, methodical and ruthless” Geraldine Matthews of Tower Hamlets Wheelers.

All the projects that have been shortlisted sound interesting, imaginative, and worthy of recognition so here's the shortlist in full and you can find out even more on the London Cycling Campaign's website …

The walking and cycling path from the River Thames, along the Lea Valley to Waltham Abbey has long suffered from a nightmare obstacle at Bow Flyover – you had to leave the path, run across four lanes of traffic and return to the route on the other side of the roundabout. The new suspended path under the flyover is already well used by walkers and cyclists

In the Netherlands bulbous sheds (Fietshangers) that enclose half a dozen bicycles are common place – in London they are a novelty. Facilitating access to a secure bike parking location without forcing the owner to carry the cycle  up or down several flights of stairs to a flat makes a lot of sense in London. You can see the Dutch style containers in the legendary Bonnington Square (once full of gaily decorated hippy squats). The council reports that the spaces were two times oversubscribed.

This on-street cycle parking facility spells out the message that bikes are a more efficient use of road space than cars..  Lambeth Council have installed three  of these novel bike stands, designed by Anthony Lau of Cyclehoops.at Belvedere Road,  The Cut and Lower Marsh. The stands’ shape has the additional function of protecting both the cycles and their owners(as they lock their bikes) from passing cars. They include a built in bicycle pump.

Community Cycling Project of the Year

This project does what is says on the tin: it helps older people discover or re-discover cycling as a way of improving their health and fitness. The be-spoke sessions for the over-50s were  based on an idea developed in Hammersmith and Fulham but  have now  been extended to eight more London boroughs.

Cycling champions can form the nucleus of a cycling revival in a school or on an estate. The children and adults living at Sanford Housing Co-operative were unstinting in their praise for Luke Dickens, Alex Longman and Tomo who, they say, have made unsafe bikes work properly and helped people reduce their transport costs. Their bike shed is made of old railway sleepers..

Wheels for Wellbeing has expanded from a relatively small project in Croydon to an organisation running programmes for thousands of people with disabilities in Brockwell Park and Croydon Arena. New in 2010 and 2011 were special sessions for children with disabilities, an  “Inclusive Cycling Hub” at the annual Cycle Show, and campaigning over access issues.

Hackney Council took it’s inspiration from a successful series of Bikers’ Breakfasts during Bike Week in 2010 to develop a year long campaign.  Using posters, stickers, record sheets and step by step guides, staff members at 15 schools organised more than 30 events. Hackney Council reports that a total of 845 children brought bikes to school for the events and there was a 58% increase in cycling to school compared to pre-event counts

This initiative provides children with fun activates that teach them about cycling all concentrated into an action packed day. Since April 2010 more than 140 sessions have been held at more than 40 schools. The organisation that runs the events says it can train up to 180 children in day

Isleworth school took action when it found that it’s new bicycle shed was little used. An initiative that loaned bikes and scooters to pupils has encouraged sustainable travel to school and enabled those without bikes to enjoy cycling. The shed is now full.

There was no official shortlist in this category – the winner will be announced on November 16th.

Nominations in this category included:

Local Campaigner of the Year

Charlie Holland is both blogger and campaigner. He lobbied hard to successfully overturn a ban on cycling along Lambeth’s section of the Thames path.

Gerry , as she is known to the Tower Hamlets Wheelers, is described as “persistent, methodical and ruthless” in her campaigning. She also helps with the all abilities cycling group, activities with Bengali women and local cycling events

Danny Williams has attracted London-wide attention with his  “Cyclists in the City” blog about cycling in London.   Working in the City of London Danny campaigned to improve the Local Implementation Plan for the City and to secure changes at the Blackfriars junction.

London Cycle Event of the Year

Small but beautiful was the judges’ view of the Battersea Artists trail by bike ‘It was the attention to detail that people enjoyed enormously” said one.  Art and cycling enthusiast Vanessa Celosse took groups of cyclists to see a total of 17 artists homes or ”galleries

“We cycled a lot and we burnt calories” said one young pupil from Tyssen school about this ride through Hackney to the Olympic stadium. More than 100 children took part in this cross borough ride to the Olympic Stadium and some 90% said it would encourage them to cycle more.

Compared to inner London, Havening has low levels of cycling. The council organizers were therefore surprised to have attracted an estimated 4000 people to their Bikewise event. . Among the attractions was a virtual biking competition, free bike repairs, a BMX display and a bicycle polo tournament that included a team of local councilors. A survey and name gathering on the day has enabled the council to run organized rides and a second bicycle polo tournament.

1
Threat to axe New Forest’s off-road cycle network as court criticises “out of control” cyclists
2
Brexit price rises - Canyon covers some costs but UK buyers will still pay more
3
Blow for active travel in London as High Court judge rules Sadiq Khan’s Streetspace initiative unlawful
4
Bike at Bedtime: take a look at the Wilier Filante SLR
5
eBay seller refuses to accept bike auction offer – says "would be unhappy if I sold to Scouser"
6
Council has "no intention to enforce" parking restrictions in segregated cycle lane where cars are parked bumper to bumper
7
Fears new cycleway will lead to drunkenness, drug taking and 'naked selfies in the woods' (no, really)
8
Three Bora-Hansgrohe riders in hospital after driver crashes into training ride