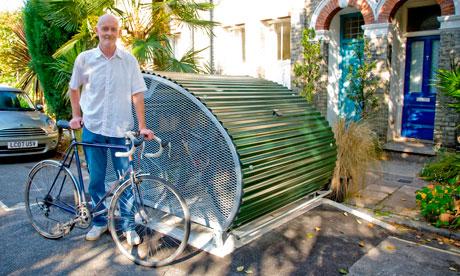 London’s SE1 postcode has emerged as the one of the capital’s bike theft hotspots south of the river, according to figures released under the Freedom of Information Act. The South London Press reports that around two bikes a day were reported stolen in the area during 2010/11. Elsewhere in South London, Lambeth Borough Coucil is introducing bike bixes to help combat the problem.

In all, there have been 2,419 reported bike thefts in SE1, an area that  includes Bankside, Borough, Waterloo and extends to Bermondsey and Elephant & Castle, since 2008.

The SE16 postcode, which encompasses Rotherhithe, Bermondsey and Surrey Quays, had the second highest level of bike theft, but at rates less than a third of those of its neighbour to the west, with 729 bicycles reported stolen during the three-year period.

Brixton postcodes – its unclear which ones have been combined for the purposes of the figures – were reported to have suffered a total of 849 thefts, while 523 bikes were reported taken in South Lambeth.

Both SE1 and SE16 fall largely within the London Borough of Southwark, while areas such as Brixton and Stockwell are inside the boundaries of Lambeth, where the local council is taking a proactive approach to trying to prevent the theft of bicycles by introducing “bike boxes” in several locations.

The newspaper reports that the boxes, originating in the Netherlands and funded by Transport for London, have been deployed in Bonnington Square, Vauxhall, and Crimsworth Road in Stockwell, and says that it represents the first time they have been used in UK.
.
Cyclists can access the boxes by key, at a charge of £5 a month – clearly, Lambeth’s council officials have a bit more nous when it comes to working out how to operate such a scheme than their counterparts in Durham.

Councillor Nigel Haselden, Lambeth’s transport cabinet member, told the South London Press: “Many residents in flats are put off owning a bike because they worry about it being stolen and don’t have the room to store it safely inside at night.

“These new bike boxes solve that problem and I’m really pleased to see them being introduced.”

According to the council’s website, applications to use the existing bike boxes have now closed, with allocation determined in line with criteria drawn up by local residents’ groups in each area.

At Bonnington Square, applications were invited from “Those who don’t have access to back gardens or suitable indoor space… with priority given to those that have to navigate stairs.”

For the Crimsworth Road units, applications were weighted depending on five criteria, the most striking of which was that the applicant had to give up a parking permit if they had one.

The other criteria were whether applicants had “access to a secure internal space or back garden to park your bike,” the frequency of using their bikes, the number of cyclists at the address and whether they needed to negotiate stairs.