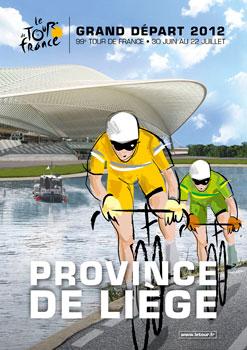 Ok, it's only the 30th of June, but worth knowing if you need to start planning your time off...
by Simon_MacMichael

With the UCI publishing its 2012 WorldTour Calendar this week, there is a timely reminder that due to the London Olympics taking place in early to mid-August, the Tour de France starts in June, something of a rarity these days. Okay, the Grand Depart in Liege is on the very last day of the month, but if you have holidays to schedule or are thinking about riding the Etape, it’s worth planning ahead now.

Under the pattern that has become established in recent years, ordinarily the Tour would in all likelihood have started on Saturday 7 July. But with the men’s road race in London taking place three weeks later to the day, and the day before the final sage of the Tour, the two events would have clashed.

As a result, the Tour starts on 30 June, unusual in recent years but by no means anything out of the ordinary once you start looking further back.

Indeed, between the race resuming in 1947 after World War II and Bernard Hinault becoming the last Frenchman to win the maillot jaune in 1985, the Tour started in June 30 times and in July on just nine occasions.

In some years, the race started so early there wasn’t even a Bastille Day stage – although we imagine that probably mattered less back in the days when French riders actually started the race among the favourites to win the overall title.

Since the 73rd edition in 1986, however, which started on the Fourth of July and ended, perhaps fittingly, with Greg LeMond becoming the first American Tour winner, two editions in 28 have started in June, in 1990 and 1996.

Instead, next year it’s the London Olympics that are unusually early. The Games are the fifth edition since professional sportsmen and women were first allowed to compete at Atlanta in 1996, which actually started while the Tour was under way.

With the road cycling events taking place towards the end of the Games, that meant there were nearly two weeks between the end of the Tour and Chris Boardman finding out what the third step of the podium was for when he picked up time trial bronze, the same colour medal as Britain’s Max Sciandri had picked up three days earlier in the road race.

The Sydney Olympics in 2000 started in September, while the Athens and Beijing Games both began in August, at least a fortnight after the end of the Tour. Next year, however, there are only six days between Mark Cavendish potentially winning on the Champs-Elysées for the fourth year running and clinching Olympic gold on the Mall six days later.

Predictions are though that the closing days of next year’s Tour will be a lot kinder on the non-climbers than this year’s race was – remember those summit finishes on the Galibier on the Thursday and Alpe d’Huez on the Friday? In 2012, it looks likely that the race will instead head out of the Pyrenees midway through the third week. We’ll know for sure when the route is announced in less than a fortnight’s time.

In the meantime, here’s the full UCI WorldTour Calendar for the 2012 season: