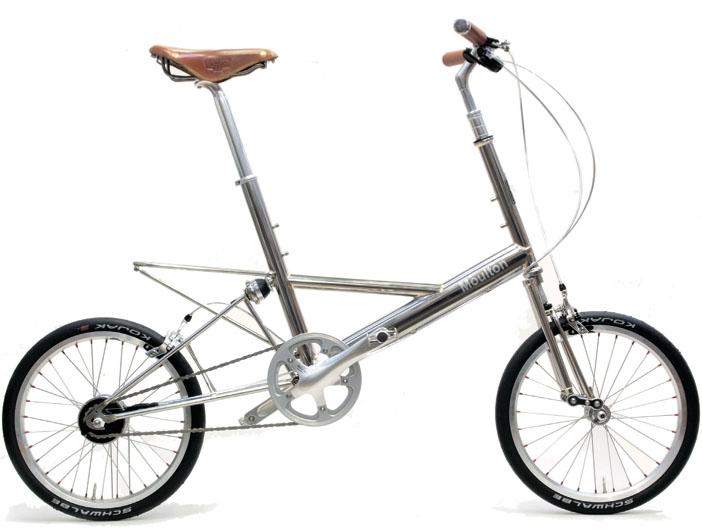 They're making 191; no one knows why
by nick_rearden

A stainless steel limited edition inspired by the original 'F' pattern small-wheel bicycle by Dr Alex Moulton from 1962 will be going into production and on sale from December.

When we wrote about Alex Moulton's 90th birthday party back in April 2010 where he was presented with a one-off stainless steel replica of his original design from the early 1960s, we speculated that we couldn't see why it couldn't go into production and if it did, we wanted one.

It looks like at least the first step will be achieved this December when a 'strictly limited' run of the model now officially called '60' will be started. We weren't the only ones excited, it seems, as the production of 191 has already been half spoken for by worldwide dealerships. Sales of Moulton bicycles, still made to order and by hand in Bradford on Avon, are particularly strong in Japan, South Korea, Singapore and, funnily enough, Taiwan.

Why 191? No one at Moulton seems to know although a lot of things at the Wiltshire factory are a little eccentric compared to the modern world, not least that one of its employees, Timmy Bigwood, has worked for the company since 1962 and will be getting the first one of the new model as a 'thank you.' That'll be the '1', then.

It may be a classic design but the hardware is bang up-to-date with a combination of the latest Reynolds and Columbus stainless steel employed in the structure of the frame - albeit silver soldered in timeless fashion - and the gearing will be Shimano's new Alfine 11-speed hub which the more you think about it seems as if it were custom-made for the application. Ratios from low 20s to over 100 gear inches will cover most eventualities in nicely spaced increments via a simple thumb-shift.

Main feature as ever, though, will be the dual suspension allied to fast, high-pressure tyres which Dr Moulton has always maintained leads to better ride quality than on a conventional bicycle. If you want it in technical-speak, "leading-link front forks with adjustable damping and ride height; and rear forks with a Hydrolastic fluid-damped spring and a Flexitor bonded rubber pivot."

In essence, it's the latest version of the suspension from the 'Speed' model which our Tony Farrelly and Shaun Moulton are talking about here when the Speed was launched at the Cycle Show two years ago.

Anyway, the price is £4,000 which puts us out of the running but they have promised us a ride when the first production is ready.