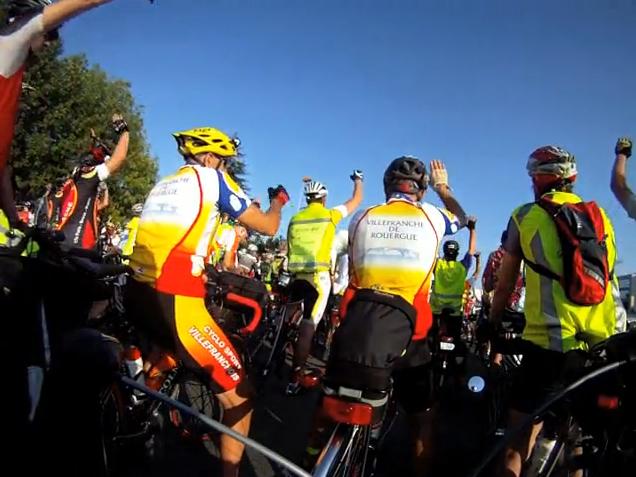 Video: 'Towards the Ocean' Paris-Brest-Paris by Pete Kelsey

1,230 kilometres in less than four days. Do you think you could do it?
by nick_rearden

August 21st-25th: the 2011 edition of the Paris-Brest-Paris Randonnée, an event so huge and intricate to organise that it only takes place every four years. It was only the 17th running of PBP since 1891, a big thing to say the least for the Audax Club Parisien that promotes it and the thousands who ride.

Cyclists from 45 countries have trained and qualified in a series of increasingly long rides under the auspices of Audax, the governing body of long-distance timed cycling, to earn the honour of suffering 1,200km-plus over potentially four days and four nights. 1,500 volunteers in eight control towns, from Saint-Quentin-en-Yvelines near Paris to Brest on the Britanny Atlantic Coast and then back again see stalwart cyclists in an increasing state of fatigue as they grab food and a few hours of sleep under tables and across chairs.

The formal aim is to beat between 80 and 90 hours depending on age and bicycle style but everyone has their own internal target based on who they're riding with and past experience. In 2007, the fastest riders finished in 44 hours 48 minutes but it was a bad year for weather and only 3,603 competitors out of 5,311 completed successfuly within their time limits. We're still looking forward to final stats on the 2011 edition.

Meanwhile, we have the film made by Audax rider Pete Kelsey of his PBP 2011 supported by the Kelsey family. Pete is a member of the Willesden CC, whose 14 members signed up for PBP 2011 made it the best-represented club of the British contingent. The video is 14 minutes long, so put the kettle on and enjoy.

Be warned, though, that you might want to join Audax UK at the end. As Pete says when we asked him how he felt, "Relieved and elated in equal measure. Relieved to have got back safely and without too much physical damage, and elated to have ridden well, in a lovely country where cyclists are made to feel special, at least for these few days.

"PBP is a joyous human endeavour, not easy but one which any cyclist who's reasonably fit and with correct motivation can achieve. I hope the film shows this and encourages others to have a go."

There's a whole four years to get ready for the next one.

Towards The Ocean - PBP 2011 from Milltag on Vimeo.