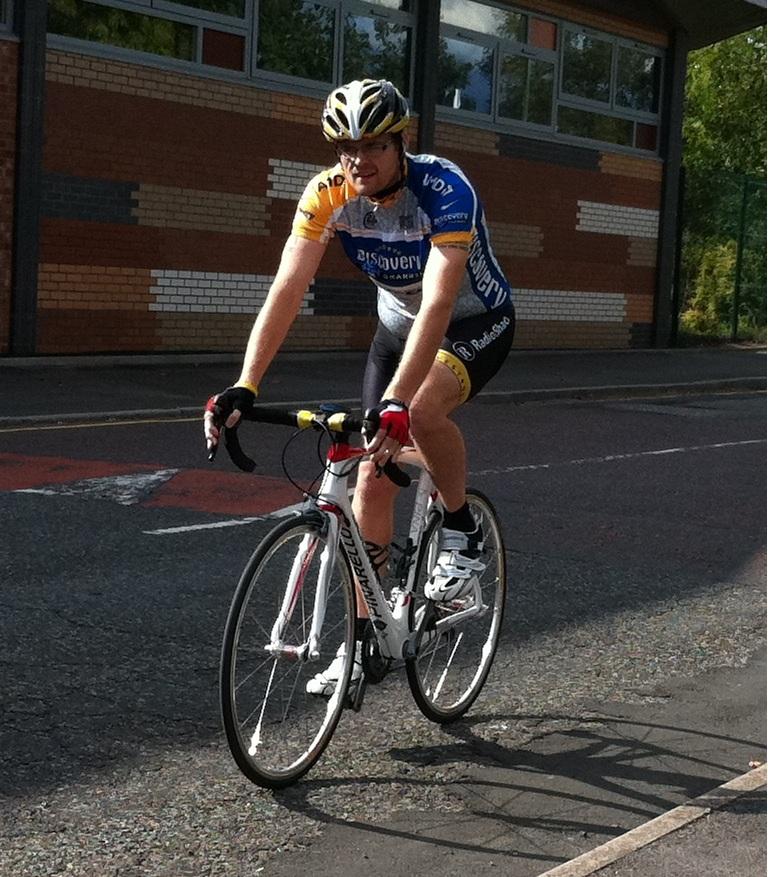 Cyclist who slimmed from 39 stones to 13 tells road.cc of his personal odyssey
by Simon_MacMichael

Gary Brennan, who took up cycling three years ago in a bid to lose weight after tipping the scales at just shy of 40 stones, has been nominated to carry the Olympic torch when it passes through his home city of Manchester next year. If he is selected for the honour, it would represent the culmination of a remarkable transformation for the 30-year-old, who now weighs a much healthier 13 stones.

Since getting on his bike in April 2008, when pedalling half a mile left him fighting for breath, he now rides as much as 200 miles a week. Along the way, his body mass index has dropped from dropped from over 70 to 24.2.

“It feels like I have almost reached the end of my journey,” Gary told road.cc. “In three years, I have gone from someone who was sat watching the Olympics in total awe of the British cycling team, to someone who potentially could well be involved.

“Sure it’s not the same level, but still, coming from where I started at just three short years ago it’s amazing and if I do get to carry that torch, then wow, what an end to this story it will be!”

Father of two Gary, who has charted his successful efforts to lose weight over the past three years on his blog, describes the reaction to his transformation from friends and family as one of “shock and awe,” adding, “no-one, not least myself, expected me to do what I have done”

He continues: “Sure people have been supportive but at the same time, I was 40 stone, we all agreed that if I could lose a HUGE 50% of my body weight and get down to 20 stone, then at 6ft 3" that would be a remarkable achievement. Yet once I hit 20 stone, all it did was add more and more fuel to that fire in my belly for success.”

As his weight has reduced, Gary’s focus has changed from shedding the pounds to now looking to get the most out of his cycling, a change in emphasis that will resonate among many who bought a bike initially as a means of keeping fit but have been drawn further and further into cycling for its own sake.

“I used to say in the beginning it was the hardest thing I have ever done, but to be honest, I look back at the start and it was okay, I didn't need to push 150% to get the weight loss started,” explains gaz.

‘But in the last 12 months,” he adds, “I have put so much effort in, I have pushed harder than in the days at the start – it’s not about the weight any more, it’s now all about becoming the best cyclist I can be.”

In July 2010, however, Gaz was hit by a van while out riding which left him injured and unconscious in the road and led to a crisis of confidence that almost saw him abandon cycling.

“The accident affected me badly,” admits Gary. “I was off the bike for around a month, I couldn't walk for a couple of weeks as I'd taken a huge impact on my knee (writing off a brand new Cube MTB frame).

“I gained quite a few pounds, I felt that I was about to slide back to where I'd come from, but I didn't, I got up and I did what I do best, I got on my bike and I went for it as hard as I could.

“I recall coming up to ‘the junction’ [where the accident took place] about eight weeks after it happened and I totally froze. I couldn't pedal though it, I just hit my brake and stood on the pavement, going though it all in my head again, how it could have been so much worse had I not managed to unclip my SPD's moments before the impact.

“That day did me the world of good as I have never looked back since, its now been over 12 months since and while my hip and back are far from okay, I can still do what I need to do.”

Besides riding his bike to and from work, Gary has also ridden the Manchester-Blackpool sportive, helping him find a focus for his efforts on the bike. It's a direction he’s keen to continue moving in, and his ambitions aren't confined to the north west of England.

"Short term I am riding the Bruntwood Ellipse this weekend, it's got more climbing than I have done as a group before and I want to push myself against others in that environment," he says.

"It will also tell me how close to the 'long-term' goals I am at, I missed out on the Manchester-Blackpool 3 hour target I'd set myself as my riding buddy got a puncture [he finished in 3 hours 10 mins], so next year I'm going all out for that."

Nor are Gary's ambitions confiend to the nortwest of England, as he explains: "Once my kids get a little older and I can take time away, I'd love to do Mont Ventoux and Alpe d'Huez as well as ride over the Golden Gate Bridge. I also intend to run a Marathon and Triathlon before I'm 40."

Given the determination he's shown in achieving his goals over the past three years, few would doubt that Gary is capable of doing all of those. So what would the old Gaz say to the new one if they happened to bump into each other?

"Good question," he reflects. "I'd like to think that 'I' would believe in 'myself' to get the job done but back then, I don’t think I would have believed what I could do. I think the old me, upon seeing the new me, would have said 'Nurse, there is a crazy man here, pretending to be me,'" he concludes.