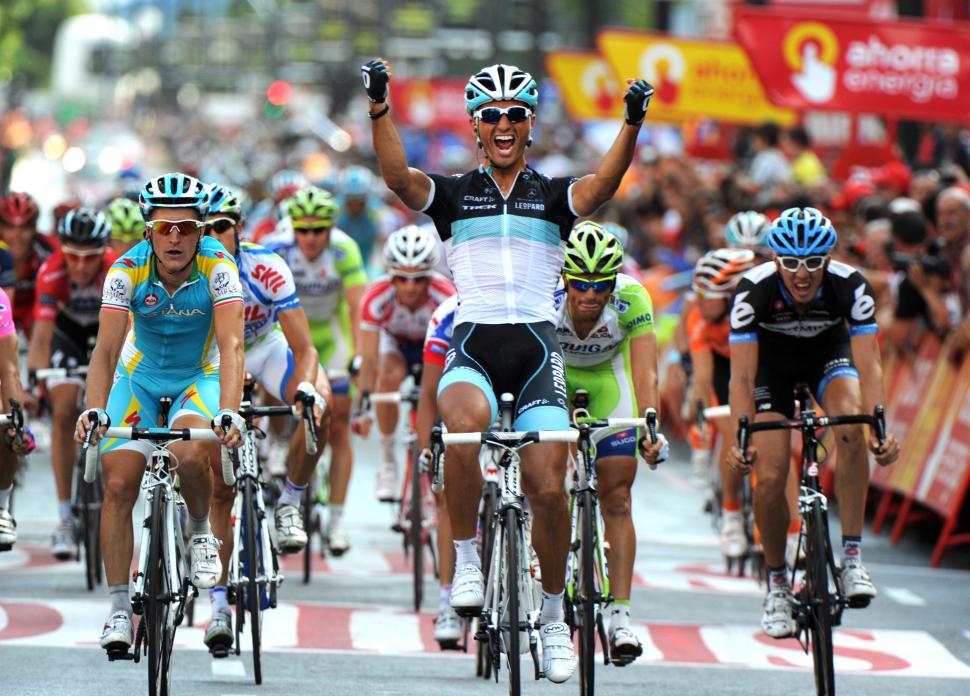 Race leader taking nothing for granted with Team Sky's Chris Froome only 13 seconds behind...
by Simon_MacMichael

Juan Jose Cobo will tomorrow ride into the centre of Madrid in the red jersey of the Vuelta a Espana leader, but the Geox-TMC rider is not taking the overall victory for granted, and will be on the watch for any attempt by Team Sky’s Chris Froome to try and overturn his 13-second deficit on the Spaniard. Leopard Trek's Daniele Bennati, meanwhile, has been savouring the seventh Vuelta stage win of his career in Vitoria this afternoon.

Traditionally, the last day of the Vuelta, like the Tour de France, has an end-of-term feel about it, with the GC effectively neutralised as the jersey wearers sip cava for the cameras before the sprinters fight it out on a city-centre circuit.

Remarkably, should he maintain his advantage over Froome tomorrow, Cobo’s margin of victory will only be the joint third narrowest in Vuelta history, however, with the closest being the 6 seconds by which the Frenchman Eric Caritoux beat the Spanish rider Alberto Fernandez in 1984.

However, with 20 bonus seconds on offer to the stage winner, and up to 12 at the two intermediate sprints, Cobo isn’t quite ready to deliver his victory speech.

“Mathematically, I’m not the winner of the Vuelta yet,” he maintained after today’s Stage 20, won by the Leopard Trek sprinter, Daniele Bennati.

“There are two remaining intermediate sprints and the finish in Madrid,” explained Cobo. “That makes a total of 32 seconds up for grab but fortunately, Froome isn’t a sprinter. 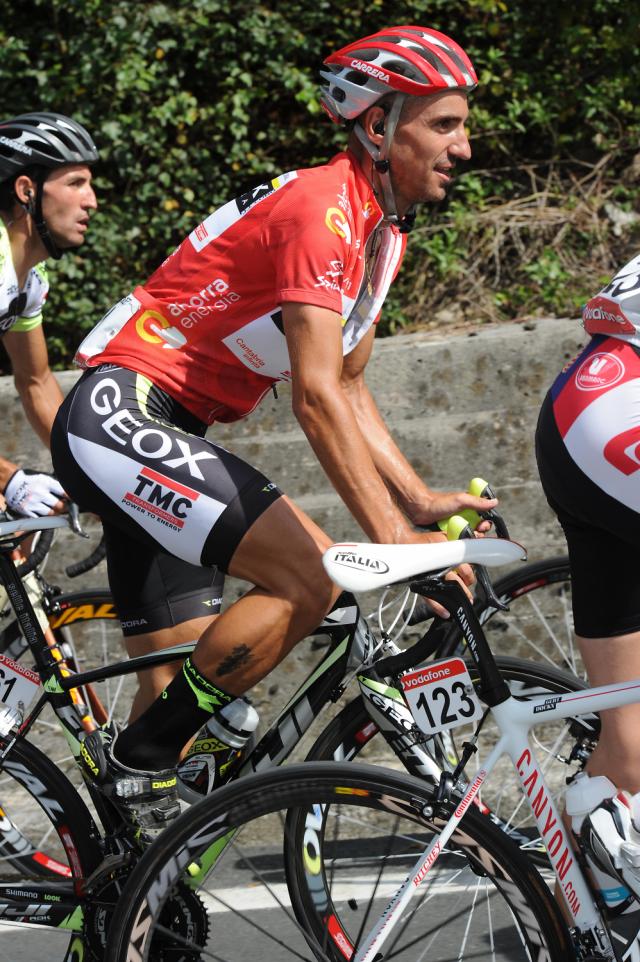 Juan Jose Cobo: One day away from winning the Vuelta (copyright: Tour of Spain/Graham Watson)

Nevertheless, the Geox-TMC rider insisted he would be on his guard.

“I’d love tomorrow’s final stage to be a party but Froome has the right to race for winning.”

The Team Sky rider went in search of bonus seconds today, but mistook the 20 kilometre to go banner for an intermediate sprint point a couple of kilometres further down the road.

The confusion came after race organisers decided to change the location of the second sprint while the stage, which had begun in Bilbao, was actually under way. 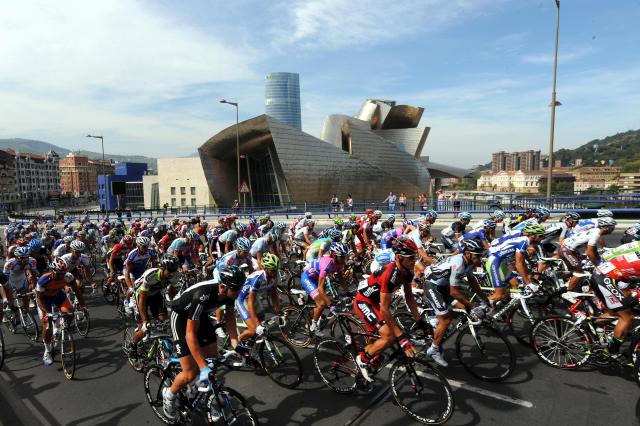 The Vuelta passes the Guggenheim as it heads out of Bilbao (copyright: Tour of Spain/Graham Watson)

“This was another really hard and hot day,” reflected Froome afterwards, adding, “It was important to stay hydrated, I think I drunk fifteen bottles.

“I sprinted at the 20km to go mark instead of the intermediate sprint. It was a mix up but we tried again.

“We’ve kept pressure on Cobo with the commitment of the whole but once again, he didn’t crack.

“My father and my brother have followed me for a few days and they’ve just decided to accompany me until Madrid,” Froome continued. “I’d love to please them with being the winner of the Vuelta,” he concluded.

The overall standings may be tight, and the points classification closer still – Katusha’s Jouaquin Rodriguez and Rabobank’s Bauke Mollema are tied, but the Spaniard has the advantage because he has won two stages – but at least the mountains title was settled today.

For the fourth year in a row, the polka dot jersey has gone to the Cofidis rider, David Moncoutié, although he was able to relax today, with his closest rival, Matteo Montaguti of AG2R, missing out on getting into the day’s break, and thereby the chance to close the gap on the Frenchman. 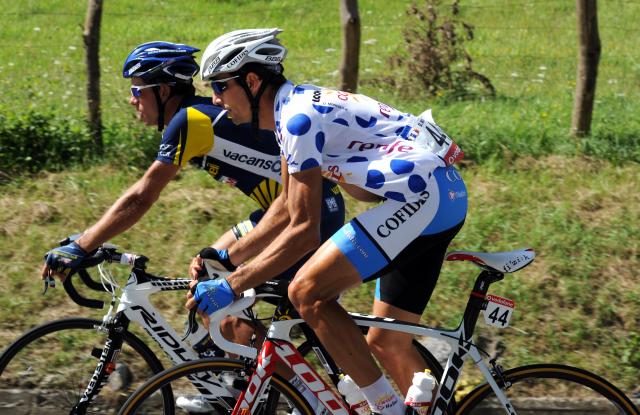 “This is it: for the fourth consecutive time, I’m the best climber of the Vuelta,” said Moncoutié afterwards. “It has never been done before in the history of this race.

“I’ll ride for another year and I hope to try and win the polka dot jersey of the Vuelta for the fifth time like [José Maria] Jimenez did ,” he added, although those victories by the Spaniard weren’t consecutive.

“These past few stages have been difficult because I’m very tired,” Moncoutié continued. “I monitored what Montaguti was doing and once I was out of danger, I was relieved.

“I owe this victory to my team-mates and particularly Nico Sijmens,” he added. “Two days ago, he took eight points away from Montaguti and I’ve won with an advantage of seven points only.”

With 20 kilometres left today, the Rabobank rider Carlos Barredo, winner of stage 15 in last year’s race and the last survivor of today’s break, was out in front on his own. He was subsequently caught and passed by Cobo’s team mate Carlos Sastre, but the 2008 Tour de France champion was himself swept up by the peloton as the sprinters’ teams jostled for position. 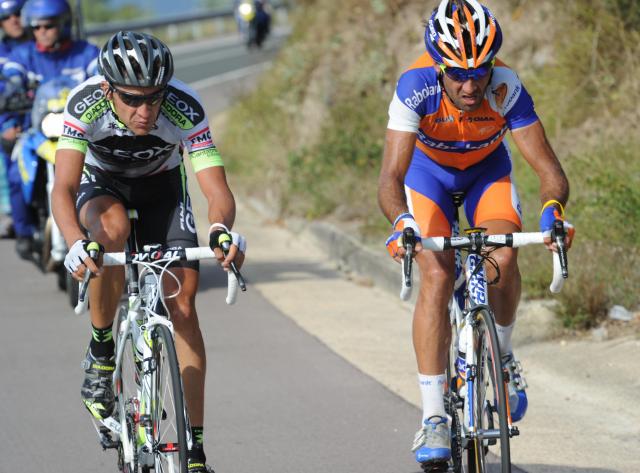 On Tuesday, Leopard Trek had seen a carefully executed leadout for Bennati fail to bear fruit when the last man in his train, Robert Wagner, misread a confusing road layout and went the wrong way. Today, the team led the chase of the break and was clearly determined not to let another chance go begging.

“This is an extremely important victory for me and for my team,” said Bennati, who outsprinted fellow Italians Enrico Gasperotto of Astana and Liquigas-Cannondale’s Damiano Caruso to take victory today.

Referring to the upheaval surrounding the team, with general manager Bryan Nygaard departing ahead of the merger with RadioShack and the future of a number of riders uncertain, Bennati said: “The team has been going through challenging times lately, and this is our reward for hard work despite the disruptions around us. 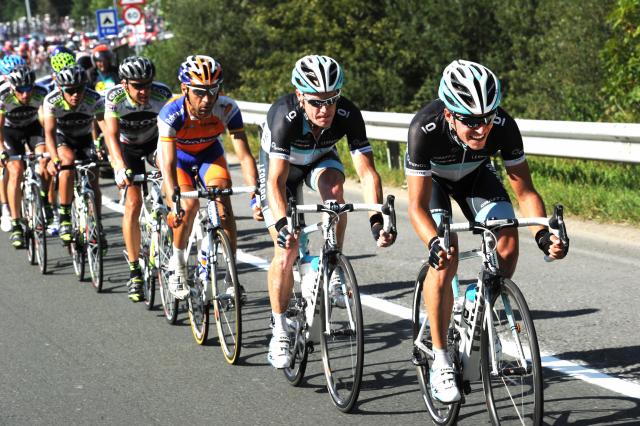 “To have guys like Maxime [Monfort], who is sixth on the general classification, and Jakob [Fuglsang] lead me out in a sprint is a really fantastic feeling.

“The victory here is also confirmation that my preparation for the World Championships are going as planned,” added Benati, who spent one day in the race leader's jersey during the opening week.

“It’s important for the morale to see that I am getting better and better over these three weeks. This is especially nice because this stage wasn’t destined for the sprinters. Anything could have happened here, so it’s reassuring to take a stage like this one.”