We sling a leg over Cervelo's new aero superbike and take a look at their almost ultimate R5 VWD...
by Mat Brett

We first showed you the S5 when we saw it at the Tour de France early in July and now we’ve had the chance to put some miles – or indeed kilometres – in on it, we also rode the R5 and got a look at the new R5VWD frame.

The whole point of the S5 is that it’s an aero road bike, nicking ideas and features from Cervélo’s all-conquering time trial range. So, you get ultra skinny tubes and a tiny frontal area. Walk directly away from it 10 yards and you might never find it again. Okay, that’s not true, but you get the idea – it’s thin.

The cutaway seat tube smooths the airflow from the frame to the rear wheel while the dropped down tube does a similar job further forward, smoothing the airflow from the fork to the frame and minimizing the turbulence behind the fork crown. The head tube is an hourglass affair with a cinched in waist, the seatstays are crazy-thin and they manage the airflow over the rear brake calliper. Want a few more aero features? The seatpost is like a knife-edge, the cables run internally… Aerodynamically speaking, there’s a lot going on here.

One thing I was really surprised about on the test ride was the height of the front end, even with the stem positioned right down on the steerer. I was on a 58cm model and the head tube on that bike is 20.6cm tall. That’s… pretty high. Okay, I had a low-drop handlebar on my test bike and we’re hardly talking ‘sit-up-and-beg here, but even so… I just felt like my upper body wasn’t in an especially flat and aero ride position. 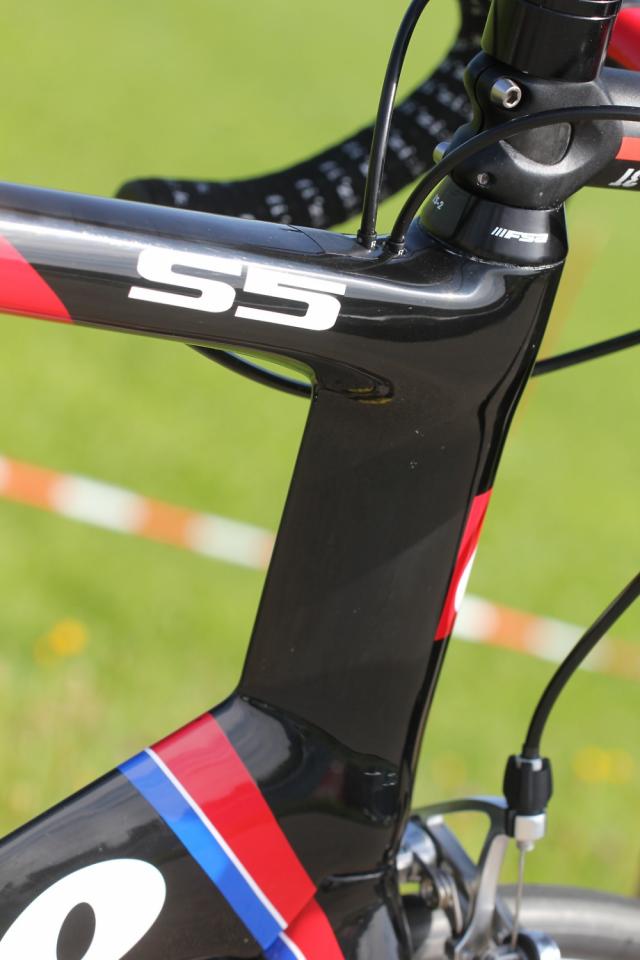 The majority of the drag slowing you down when you’re riding is acting on you rather than the bike so why the high (or high-ish) front end? We asked Lars Janssen, Cervélo’s Global Product Manager why, if aerodynamics are the key to going fast – and if there’s one thing we all know about Cervélo is that they believe aero is where it’s at – why not, you know, shorten the head tube and go for a lower ride position?

The answer is that most people who ride a 58cm will set their handlebar at about the height as they were on my test bike. They’ll have a couple of spacers between the top of the headset and the bottom of the stem. You’re far better off taking up that space with an aerodynamically shaped head tube than with round spacers.

Okay, makes sense. But what about people who can comfortably ride with a lower front end, a flatter back, a more aerodynamically efficient body shape? You can fit a negative rise stem (a funny phrase that; why not ‘a drop stem’?) and still have good aerodynamics.

One other aero feature on the S5 that’s worth mentioning is the bottle cage position. Yeah, I’m going to talk about bottle cage positioning. You get two position options on the down tube. Fit a standard bottle in the lower position and you’re aerodynamically much better off than fitting it in the upper position, according to Cervélo. Fit the bottle to the seat tube and there’s no aero penalty at all compared to not having one fitted.

The S5 isn’t as light as the R5 and it doesn’t have the same level of comfort either. It’s not a world away but the ultra-skinny seatstays on the R5 provide quite a bit of give – you know, ‘vertical compliance’ in bike speak. The tubes on the S5 are skinny too but the longer profiles don’t flex to the same degree so you feel the road just that little bit more. Don’t get me wrong, it still seemed comfortable enough on our short test ride, but it’s not setting any new standards on that front.

The S5 is currently available in a Team version although a VWD (Vroomen White Design) version is on the way. It’ll be lighter, stiffer and more expensive, and it’ll be available from November… and if Cervelo's favoured hierarchy for the R5 is also followed on the S5 that means there should be an S5 in the ultimate S5ca incarnation along at some point soon too. We put that to the man from Cervelo and he congratulated us on our deductive powers. That doesn't happen often. 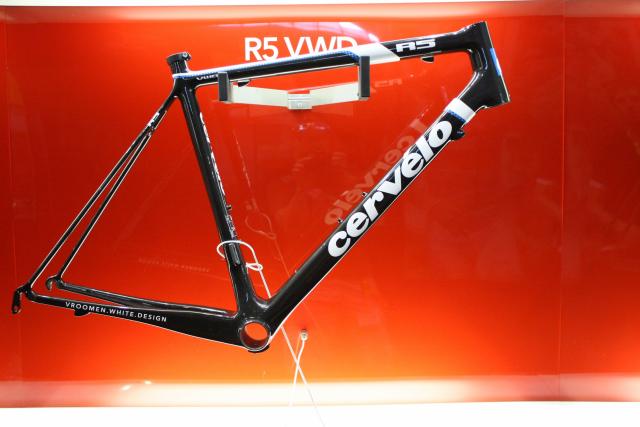 Unlike the S5, Cervélo’s top-level R5 road bike is designed to be as lightweight as possible without compromising stiffness. Cervélo have always been clear that they see the aero road bike as the future but for the climbers and those that want something more classical - there's the R-series. For Cervélo the R5 is the classic road bike taken to its ultimate conclusion… and then pushed a little.

The R5 comes as a base model, a Team model which is 10% lighter and 10% stiffer, and a new VWD model that’s being launched at Eurobike that’s 10% lighter and stiffer again. That sits belo the very top model the super expensive R5ca which is made in California rather than Asia. All the R5s come out of the same mould but with a different grades of carbon and different lay-ups. As you'd expect the California has the fanciest of the lot with a different grade of carbon and different lay up around the bottom bracket.

The new VWD is built in built in Taiwan and features one grade of carbon throughout with no extra reinformcement around the bottom bracket, we'd guess that the extra lay up on the R5 CA is probably to add a some belt and braces strength as well as stiffness to the area of the bike that is going to have to deal with the greatest loads. The super fancy lay up on the rest of the bike no doubt means (adopts French accent) some waffer theen wall thicknesses.

*Although we can't help wonder how much of the weight saving over the R5 VWD is accounted for by the R5 Ca's lack of paint… we'll ask.