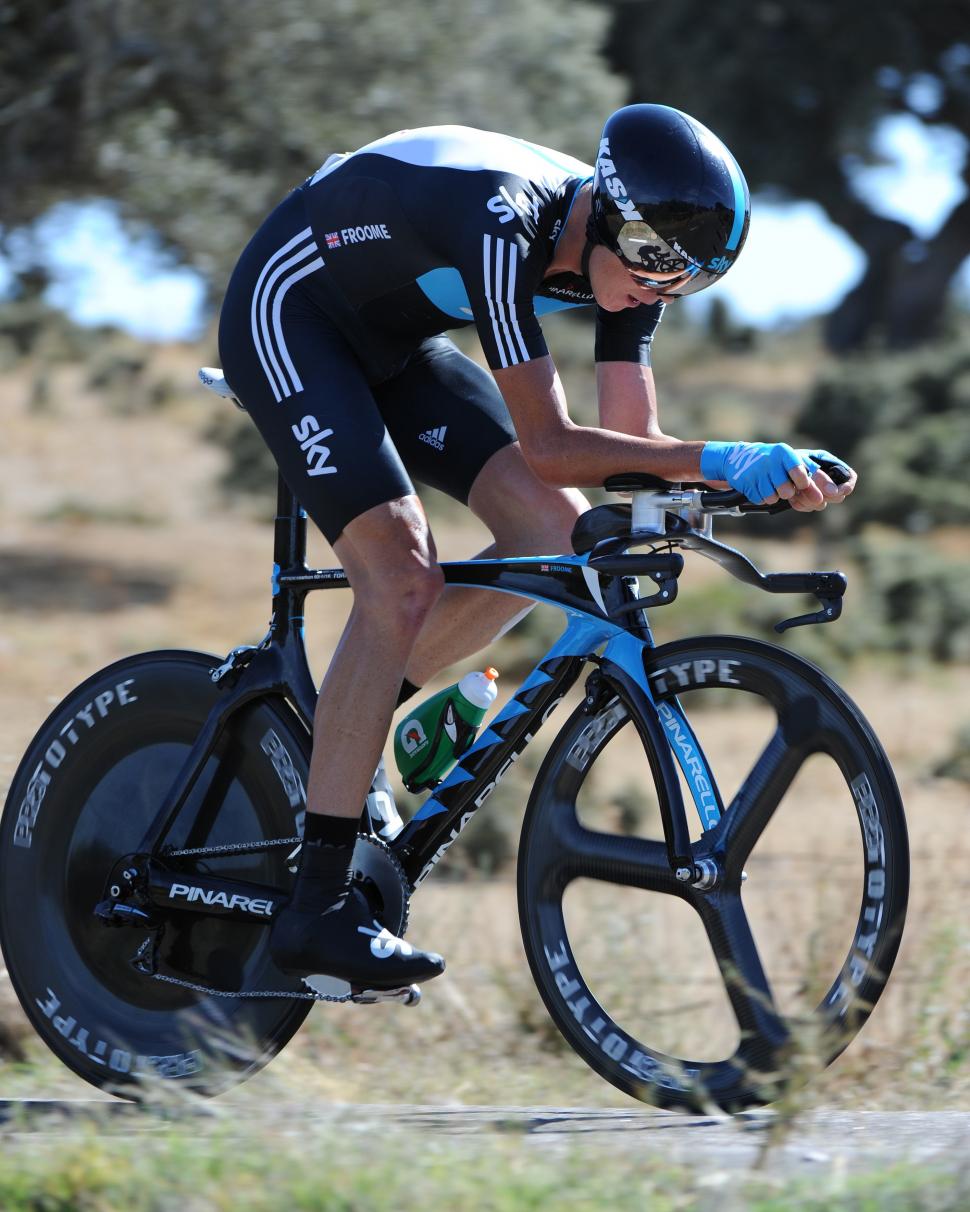 Chris Froome on his way to taking the lead in the 2011 Vuelta (copyright: Tour of Spain/Graham Watson).jpg

Team Sky’s Chris Froome has been speaking of his surprise and delight at unexpectedly finding himself in the red jersey as overall leader of the Vuelta a Espana on a day when the smart money had been on his team leader, Bradley Wiggins, pulling off that achievement. Meanwhile, stage winnner Tony Martin confirmed that he will pose a threat to Fabian Cancellara in next month’s world championship time trial, while Taylor Phinney suggested he is ready to step up from the under-23 ranks and challenge for the senior title.

Today’s Stage 10 of the Vuelta provided the sole individual time trial of the race, a 47-kilometre ride against the clock starting and finishing in the ancient university town of Salamanca.

But while Froome and Wiggins could both reflect on an afternoon’s work that had seen them rise to first and third, respectively, in the GC, for others it was a day to forget, with Michele Scarponi and Joaquin Rodriguez among those whose hopes of finishing the race on the top step of the podium in Madrid are all but over.

"It’s not really sunk in yet, it’s still a bit unreal,” said Froome this evening after finishing second in today’s stage, 59 seconds behind Martin. That was enough to elevate him 14th to 1st on GC, with a 12-second margin over Leopard Trek’s Jakob Fuglsang, one of the few big names to have a good day.

"I'm over the moon, I think I just had a fantastic day and somehow I've ended up in the leader's jersey - it's a dream come true, added Froome, born in Nairobi but adopting British citizenship in 2008 through his grandparents.

"I think it was the updates from Sports Director Marcus Ljungqvist on the radio which kept me going,” the 25-year-old continued. “To be honest I felt pretty rough out there; I was hurting from yesterday’s effort and just felt like I wasn’t really going that fast.

"What really helped was Marcus in the team car edging me on, saying ‘you’re doing great’, ‘you’ve got a really good time’, ‘just keep going like you are’ and so on. It was fantastic to have that information and encouragement – at least I knew I wasn’t doing too badly!

Regarding his performance in the Vuelta to date in which he has been Wiggins main lieutenant on the climbs, he said: "It’s gone really well, we’ve just been trying to limit Brad’s losses every day and try and keep him in contention until the time trial.

"It went especially well yesterday on Stage 9 which was also a bit of a surprise because we hadn’t planned to try and make a difference like that,” he added.

“We went into the stage just trying to keep as close to other GC guys as possible but when we got into the crosswinds up on the mountain with about 4k to go we were in the perfect position to put the hammer down and really go. We just did it naturally and it worked out.

"The other riders have been doing a brilliant job looking after us until the final and the staff have been really, really supportive. It’s been great - the environment and atmosphere in the team is just fantastic."

Reflecting on his bakground, Froome said: “I hear that I’m the first African to wear a leader’s jersey at a Grand Tour but I’m not sure if you can call me an African anymore. I was born in Kenya, I grew up there and rode my bike in Kenya as a mode of transport. When I went to schooling and university in South Africa, I saw cycling more as a sport.

“I’ve given away my Kenyan passport to get a British one. I don’t regret it, even though I would have more opportunities to ride the world championship as a Kenyan, but the Kenyan cycling federation is almost non-existing. I’m racing under a British flag but I have an unconventional cycling background.

He continued: “I want to use this red jersey I wear now as a message for all the kids who want to cycle even if they’re not from traditional cycling countries: Don’t think it’s unreachable!

“I’ve watched the Tour de France as a teenager. My history of the sport is still a bit rusty but I remember to hear about the Vuelta also as a Grand Tour. Team Sky is in a really strong position now, we’re two riders up there on GC. For sure it’s more comfortable than trying to make up time, as we were recovering the time lost since the team time trial.”

Team Sky’s Sports Director Steven de Jongh admitted: "It was a big surprise that Froomey beat Bradley but I’d say he did the time trial of his life today.

He added: "We must also not forget that Bradley broke his collarbone at the Tour de France and had an operation so it’s amazing to be performing at this level so soon afterwards. He's been great throughout the race and it was another tremendous effort from him today."

Wiggins, who went out next but one rider after Froome, was the only rider today to post a faster time than Tony Martin at the first intermediate split, albeit by just 1 second. By the second time check it was clear that Wiggins was losing time on the HTC-Highroad rider while Froome was gaining; even so, it came as a huge surprise to find the former Barloworld man not only go quicker than the British champion, but also get the red jersey in the same city where David Millar won a shorter Stage 1 time trial in 2001 to take the leader’s jersey, then coloured yellow.

The man who led the race this morning, Rabobank’s Bauke Mollema, conceded afterwards: “I’m not really disappointed. This is the longest time trial I’ve ever done. I was not feeling super but I’m satisfied with the time differences. With the climbs that are yet to come, the differences will be even bigger.” HTC-Highroad Sports Director Jan Schaffrath said of Martin’s ride today: "He started very fast. At 13km at the first time split, he was 40 seconds in front of [Fabian] Cancellara. The next 20km the roads were narrow and a bit dead but he kept his pace so it was looking good. 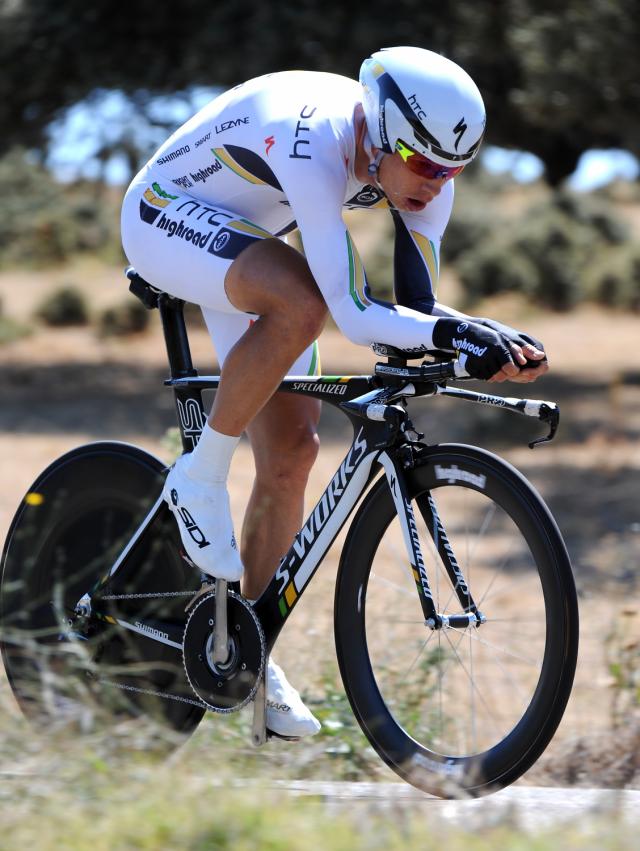 "When we got nervous was at when the last 20 riders were on the course. The wind had changed so they had a tail wind at the beginning and the time splits were getting close. But, it turned out that they had a headwind home so overall it was pretty much the same for everyone and he was the strongest on the day."

Cancellara, four times a world champion in the discipline, was off the pace today, but still managed to finish fourth, 1 minute 27 seconds behind Martin, the German perhaps being able to concentrate exclusively on today’s stage due to the early departure from the Vuelta of team mates Mark Cavendish and Matt Goss. Cancellara, meanwhile, still has a job to do to support Fuglsang and Maxime Monfort on the GC. 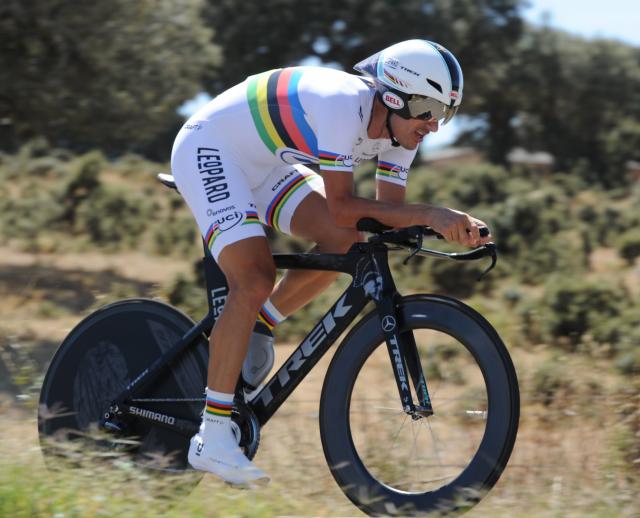 The world champion’s time was 6 seconds quicker than that of the third man out on the course today, BMC Racing’s Taylor Phinney, who won the under-23 world time trial championship in Geelong last autumn and who appears likely to one day win the rainbow jersey at senior level in the event. After tomorrow’s first rest day of this year’s race, the Vuelta resumes on Wednesday in Galicia with a summit finish at Estación de Montaña Manzaneda.