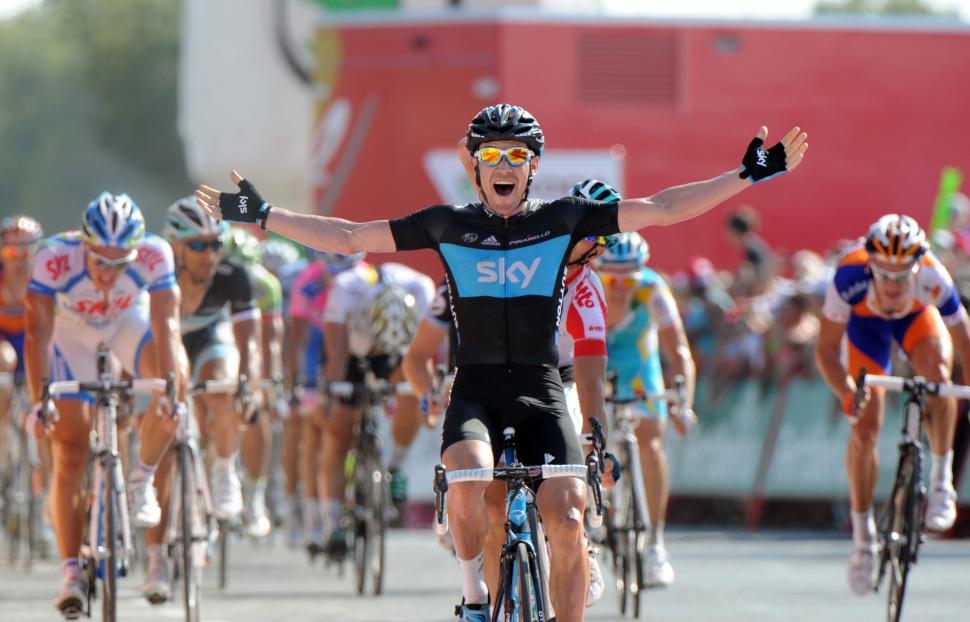 Team Sky's CJ Sutton today described winning a Grand Tour stage as "a dream come true" after the Australian sprinter got himself into the perfect position to attack as the road rose up inside the last half kilometre to win Stage 2 of the Vuelta in Playas de Orihuela this afternoon. Today's triumph followed a near-disaster for Team Sky in yesterday's team time trial, and came just an hour or so after Edvald Boasson Hagen had won the Vattenfall Cyclassics in Hamburg.

“For me it’s a dream come true to win a stage at a Grand Tour," revealed the 26-year-old former Cofidis and Garmin rider afterwards. "We don’t exactly have the perfect lead-out train here but what we do have is strength.

“Kurt [Asle-Arvesen] is the big ‘El Capitano’ and he was looking after us all day and told us when we needed to get to the front; he was a big help to me. It was really myself and Brad [Wiggins] who didn’t have to go back to the car which was perfect," he added.

“Then I was with Bradley and he took me up the outside. I then came flying round the roundabout with about 2.5km to go. I had good speed and was on Thomas Löfkvist’s wheel so I just yelled at him ‘Go!’. He looked back, saw it was me and then just drilled it straight up the right-hand side and took me right to the front, positioning me perfectly.

“I thought ‘oh this is a long way to go’ and I looked back and no one was there. So to win today and to deliver it for all of Team Sky is a dream come true – I can’t believe it.

“For the team, after yesterday it’s pretty special. Everyone was saying ‘Team Sky have had a bad start, everyone’s disappointed’ but we’d actually kept the spirits and the morale super-high and we proved that today. We worked together as a unit.”

Steven de Jongh, Team Sky Sports Director revealed that carrying out homework over what proved to be a much trickier than expected finale had helped Sutton cqarry the day.

“It’s a really good result for CJ and a good boost for the team," he said. "We really went in detail through the final kilometres this morning in the presentation on the bus and we had some nice information from the guys who were standing on the finish so we could talk them through it.

Referring to Boasson Hagen's win in Hamburg, he added: “It is also great that Eddy won in Hamburg today so it is a really great day for Team Sky.

“Today was Brad’s first stage back racing. He was a bit cautious after his crash at the Tour but it was a tricky finish today and some of the contenders lost time.

“Tomorrow will be a tough stage with the climbs at the end which could be quite selective. We will see what happens at the finish.”

The new race leader is Leopard Trek's Daniele Bennati, who was the sixth man across the line today and who had been one of the five riders from his team who had finished together to set the fastest time in the team time trial. Jakob Fuglsang had worn the leader's jersey today after being the first rider home yesterday, but the red jersey now goes to Bennati on countback.

“I’m happy to be the leader of a Grand Tour," said Bennatri after the podium presentation. "It’s not the first time that I get the jersey though but the fifth one."

"But," the 30--year-old added, "it’s clear that it would have been better to win the stage. That was my real goal today. After the difficult season I’ve had with the injury that prevented me from riding the Giro, it’s not too bad to finish sixth here today."

It was that injury to Bennati that led to Wouter Weylandt being chosen to lead Leopard Trek's sprint challenge in the Giro, with the Belgian killed after crashing on a descent on Stage 3. Bennati dedicated his taking the race leader's jersey today to his late team mate. 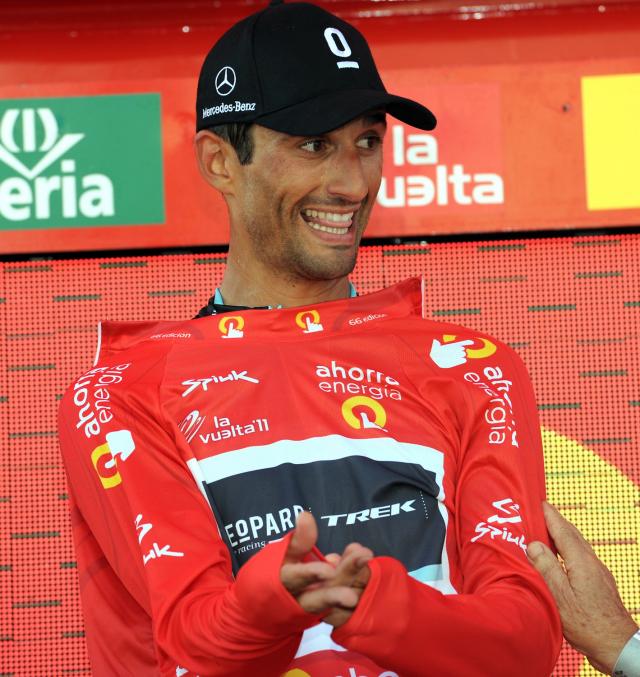 Regarding the race at hand, Bennati' added "For sure, I could have done better," he said. "I was on Tom Boonen’s wheel when he stopped his effort and as I got the head wind in my face, I didn’t feel like opening the sprint 300 metres away from the line. I could have taken the risk, but let’s be patient.

"Today it was a complicated finale with a few dangerous corners from 3 to 2km to go and a downhill. It was difficult to read the race. I’m not disappointed. Tomorrow I have another opportunity to win. It would be nice with the red jersey.” 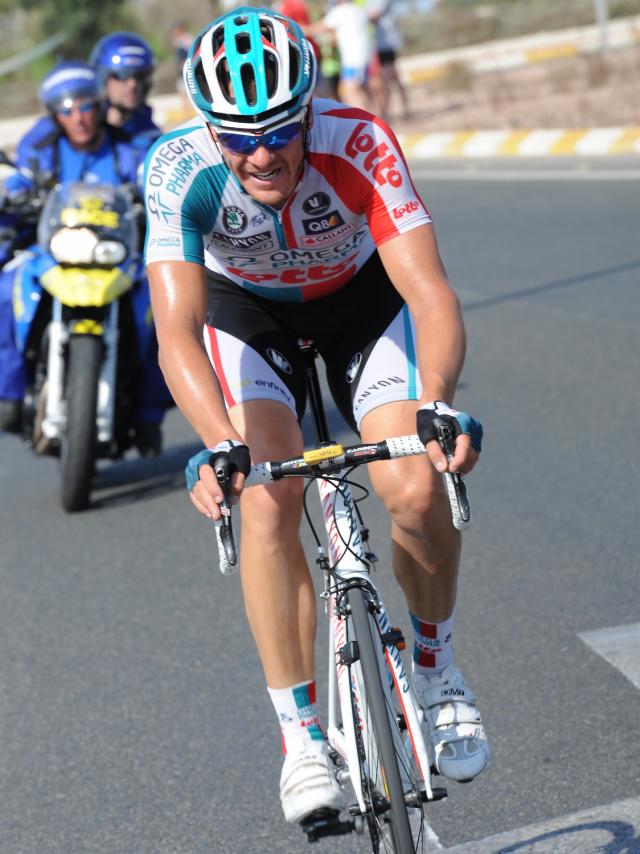 Adam Hansen on the break in Stage 2 of the Vuelta (copyright: Tour of Spain/Graham Watson) 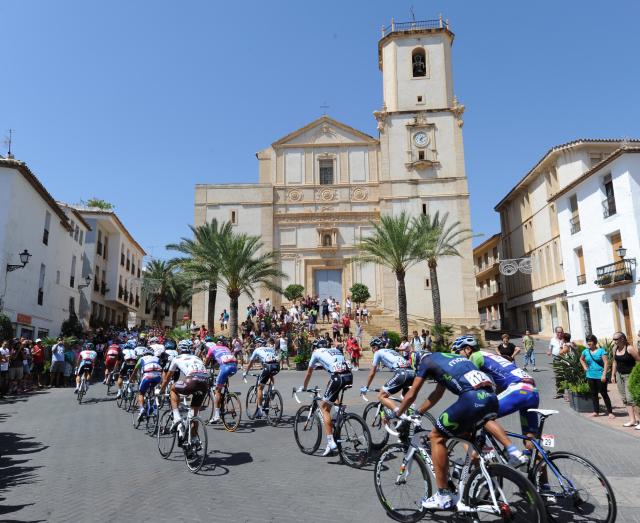 Riders at the start of Stage 2 of the 2011 Vuelta (copyright: Tour of Spain/Graham Watson)