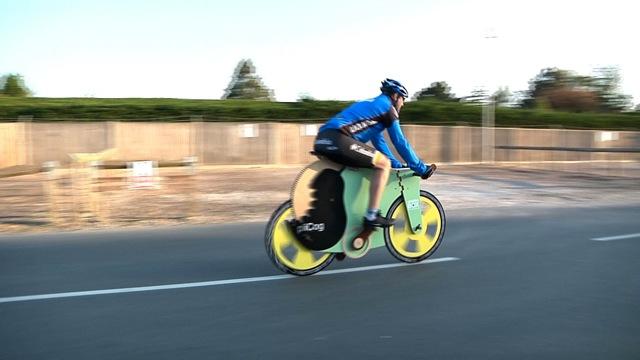 Video: It's quite heavy and not very fast (so far) but the wooden SplinterBike has a new World Record

Proving that triathletes are insane, James Tully piloted an all-up weight of 130Kg to 18kph
by nick_rearden

The 30Kg wooden bike we've been following from the off has made its mark with a new world speed record verified by the Land Speed Records Club.

The BBC is reporting this morning that the entirely wooden bike built by Michael Thompson from Norfolk and ridden by triathlete James Tully has set a new record for a wood bicycle of 11.25mph (18.1kph).

The record was set at the Quibell Park Velodrome in Scunthorpe, yesterday (Thursday) and was witnessed by officials from the Land Speed Records Club.

We last wrote about Mr Thompson and his miraculous machine back in October when he was making plans for a possible attempt at the Olympic velodrome. When we contacted him this morning he said that they'd then hoped to use the runway at RAF Marham in Norfolk, "but all the jets flying back and forth to Libya kicked off."

"We learnt a lot from yesterday and everything worked. We'll definitely be back but we need a runway with a clear run of about 400-500 meters," said Thompson. 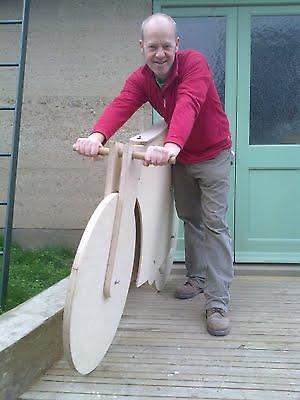 Some tech info: the front crankset has 40 teeth and the rear sprocket 10 and these are connected via the 128-tooth pliCog in lieu of a chain. The pliCog on SplinterBike 2 specially built for the attempt has drillings to reduce weight and revised aerodynamic handlebars. The 40 x 10 gear ratio would develop over 31mph at a cadence of 93rpm, suggesting there is room for improvement with a clear run. 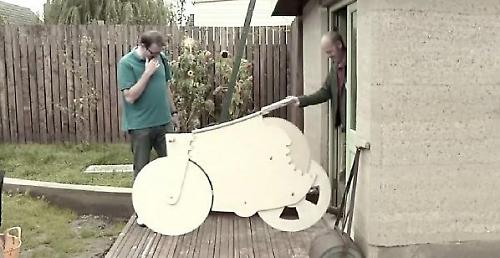 The original SplinterBike 1, which was test run on the velodrome as well, will be delivered next week to London's prestigeous Victoria & Albert Museum where it will be going on display as an example of innovative British craftsmanship.

The SplinterBike blog is here but with nothing updated yet as of this post. There are some nice Flickr pictures by Reg Tubby here.

"I can feel the cogs rattling against my old fella"