Cannondale launched its new UK bike range yesterday at Poole headquarters. The big news for budget-conscious road cyclists is a complete redesign of the important CAAD 8 aluminium frame and the big-selling bikes it supports. The luxury end is covered by more subtle changes to the carbon-fibre version of the Synapse sportive frame and there are now shipping dates and prices for the team Super Six Evo we rode in May at the Giro d'Italia. This year there are no changes to the CAAD 10 frame but the magic wand has been waved over the less expensive CAAD 8 and many of the tweaks and fettles that pushed the pricier CAAD 10 into ethereal territory for an aluminium frame have been applied to the 'budget' Cannondale. So the back end goes all slim with Thinline seatstays, just like the CAAD 10, in fact the whole rear triangle looks, and indeed is, much the same. 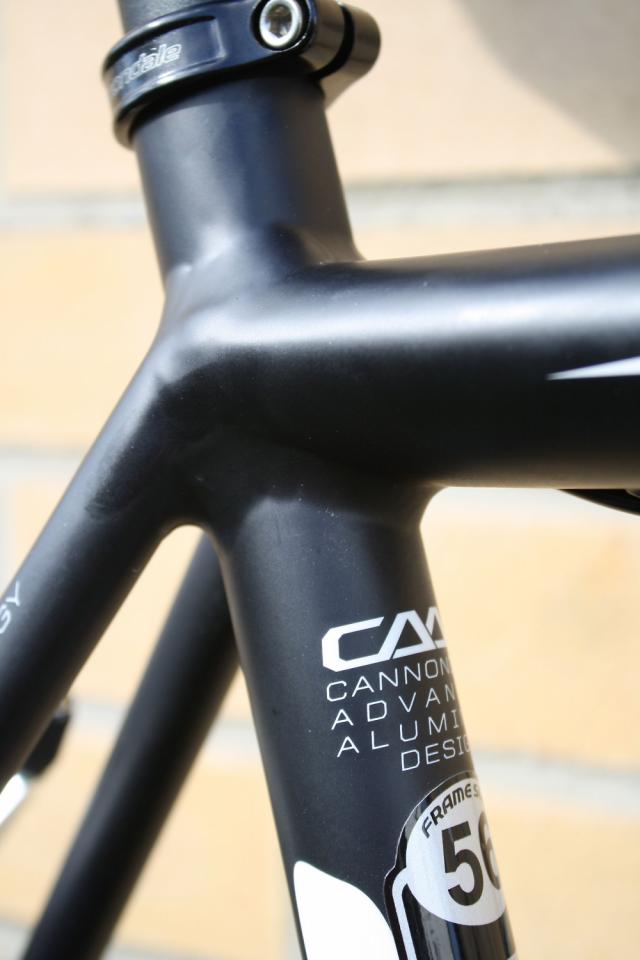 The top tube is similar too, wide, flattish top tube flowing around the seat tube in a similar fashion to the CAAD 10, the frame has also dropped in weight by 100-odd grams to 1,370 grams. The big difference that we could see was in the down and head tubees which are less 'technical' affairs on the CAAD 8 than its bigger brother. So there is no tapering for the head tube bottom to top (some of the latest top end frames are moving away from that too, mind) and the downtube is an altogether less manipulated affair - round in section where it meets the head tube. Oh, and that head tube is taller too on the CAAD 8. There are still three models based on the CAAD 8 frame, but this time the top two feature a BB30 bottom bracket. You get Shimano 105 components for £1,099.99, new Tiagra 10-speed for £999.99 and the 9-speed Sora bike costs £799.99

CAAD 10: steady as she goes 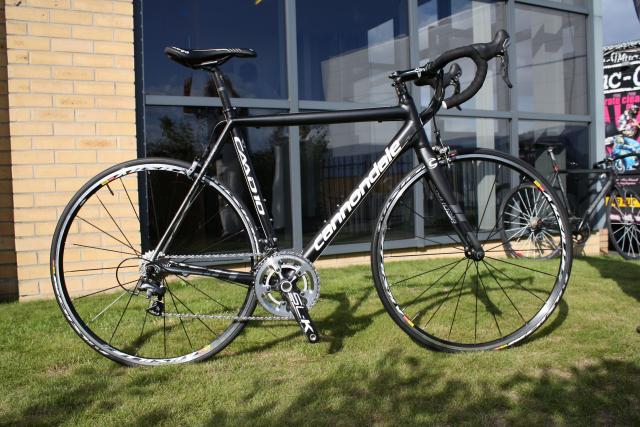 The CAAD 10 aluminium frame that was announced this time last year has been a huge success for Cannondale and the resultant bikes have been widely praised for offering phenomenal performance in the £1,300 - £2,500 price category. No surprise then that it doesn't really change this year. Talking of CAAD 10, all three models, based on Shimano 105 at £1,399.99, Ultegra at £1,999.99 and Dura-Ace £2,599.99, have risen in price by £100 but that's not surprising when we look at bike prices in general. All the CAAD 10 models were in short supply this year based on a combination of critical success and Cannondale not being able to keep up with demand so maybe a year of consolidation will be a good thing for this king of the alloy frames. The stiff BB30 bottom bracket and 1 1/4" tapering steerer underpin an efficient drivetrain with slim Synapse Active Vibration Elimination (SAVE) seatstays borrowed from the Synapse range to provide some comfort. 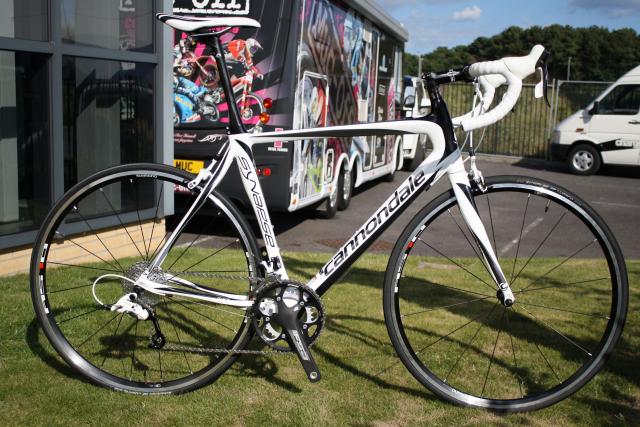 Cannondale's sportive-format carbon frame gets what Product Manager Henning Schröder describes as a 'facelift' but is actually quite a reworking under the bonnet. To the frame itself, the engineers have replaced the seatstays with a slimmer, straighter profile reminiscent of the CAAD 10 and which add 12% more compliance. The fork is also new and also along the lines of the CAAD 10 with offset dropouts. Thinking of which, the dropouts at the rear are also smaller, in line with the general move towards the successful 'pared down' character of the CAAD 10. 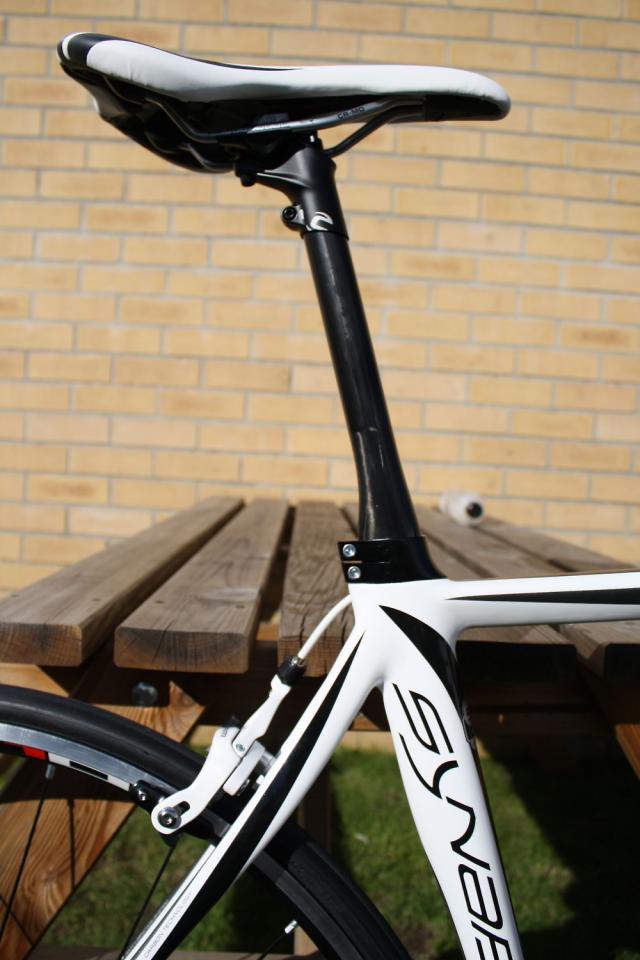 The Synapse also gets a great new seatpost system which attempts to get the best of best worlds from a carbon seatpost where designers love the idea of tuneable compliance but you can never fit the darned thing in a box for travel. You'll need to look at the picture of this but what you get is a small-diametre round (we reckon about 25mm) carbon seatpost that changes profile towards the bottom to fit into the aero-shaped frame with a neat alloy clamp and which offers 15mm of up-and-down adjustment.

At the top, the post is cut to length with a standard handlebar cutter and the saddle support clamps onto that, this time with 10mm of further adjustment. The saddle support will be available straight or with 20mm of layback. The seatpost itself is made in two different carbon-layups; a 'stiff' one which is fitted as standard on the larger frames but which nevertheless adds 13% more compliance for the rider's benefit, according to Schröder, and a less stiff one which is fitted as standard to the smaller frame sizes and which adds 75% more compliance. Of course, these can be swapped around and retro-fitted to previous Synapse frames with the aero-shaped seat tube. 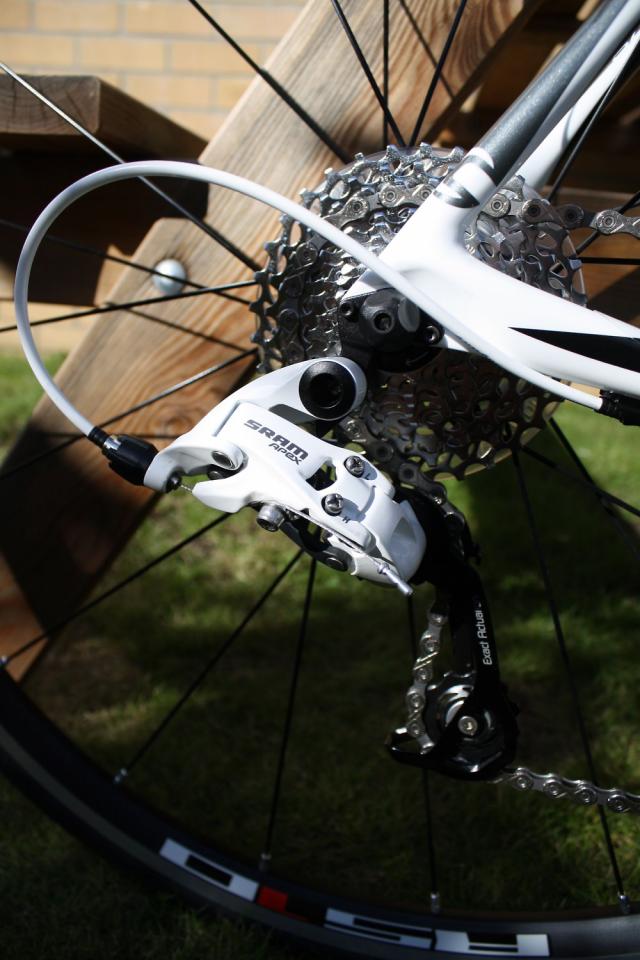 As before the Synapse frame itself is made in two different carbon layups, a high modulus one which is used on the Dura-Ace (£4899.99), SRAM Red (£3,699.99 and Ultegra (£2,999.99) versions and a standard modulus version made from the same moulds which is used for mechanical Ultegra at £2699.99, Shimano 105 (£1,999.99) and SRAM Apex with its WiFli 32-tooth bottom gear and incidentally one of our picks of the range for £1,899. Apex it could be argued is the groupset equivalent of what the Synapse is all about - comfort and performance for big rides - particularly sportives. As well as that hill busting 32T sprocket on the back SRAM Apex offers another advantage - this time an aesthetic ones in that SRAM are offering many of their groupsets to manufacturers in custom colours. So the Synapse Carbon Apex gets a white rear mech with white lever hoods and white lever paddles too… very fetching, though we can't help feel it'll be a struggle keeping those lever hoods crisp and white for any length of time. FSA get in on the colour co-ordinated compentry 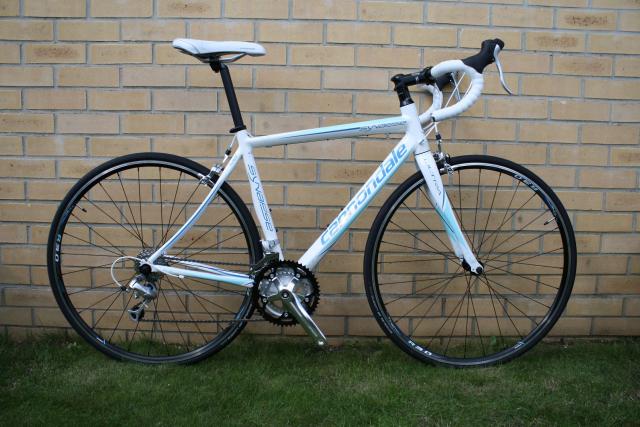 No engineering changes to the aluminium-framed versions of the otherwise geometrically identical Synapse bikes but you still get a comfort-orientated road bike with a performance edge. Just like their equivalents in the CAAD 8 range, they're not all under £1,000 any more which is a shame but in line with general pricing trends. Anyway, the 9-speed Sora and 10-speed Tiagra versions are £799.99 and £999.99 respectively with just the Shimano 105 model breaking the barrier at £1,099.99.

There are also three identical 'Feminine' versions in female-specific geometry and smaller sizes. Interestingly, the women's colour schemes on these Synapse models this year have gone a little more obviously 'pretty' while the more purposefully-racy CAAD 10 and Super Six Feminine variants keep their colour treatments more in line with the boys.

Slice: simple range of one model but phenomenal tt value

The carbon time-trial frame ridden by the Leakygas professional boys is unchanged and available as a complete build with Shimano 105 components for £1,899.99; an ideal get-you-started package for ambitious triathletes, we'd have thought. 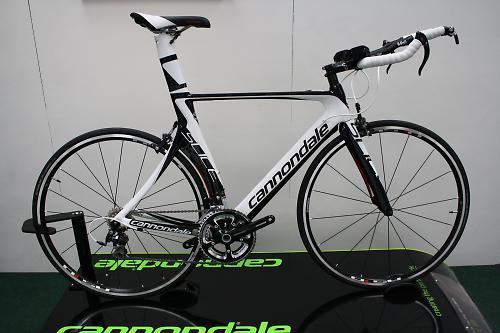 Cross: BB30 across range and bigger selection of competitive carbon 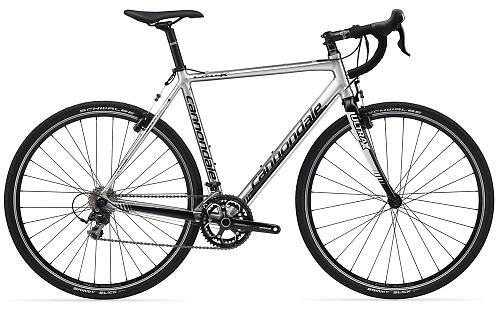 The CAADX aluminium frame we saw introduced last year carries on with the same two builds and you can console yourself if you're thinking of buying one that although the prices have gone up £100, you do now get a BB30 bottom bracket. We reviewed the shiny aluminium Shimano 105 version back in December  and gave it an 8/10 and the summary "Good ride, good spec, and good value on a race-capable all rounder." You'll be paying £1,099 for this bike now and the Tiagra version now has 10-speed which on top of the BB30 will help to justify £999.99. Especially liking the Schwalbe Sammy Slick tyres fitted now.

The carbon-fibre full-on cyclo-cross racer is now available in a standard modulus variant made from the same mould which means the SuperX carbon range has expanded to include an Ultegra (£2,399.99) and SRAM Rival at £1,999.99. The new frame only sacrifices 200 grams at 1,200 grams or 1,750 including the fork which isn't bad* for a cyclo-cross frame. The dreamy Hi-Modulus SuperX flagship carries on as before with SRAM Red and an otherwise choice spec for £3,399.99.

Super Six: Ultegra Di2 is likely to be killer but Apex is our favourite 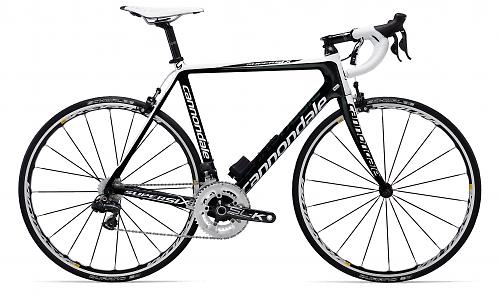 Cannondale's full-on 'Elite' geometry racer is now differentiated from the new Evo model by only coming in standard-modulus carbon guise. That's still a 1,050 gram frame in case you were feeling short changed and exactly the frame the Liquigas professionals were racing at the Giro d-Italia in 2009. There are four models starting at the top and most excitingly - if you've been following Dave and Mat in Switzerland - with a Shimano Di2 equipped model for £3,599.99. This is going to be one of the pricier ways of buying a Ultegra Di2 bike but we reckon the combination of the electronic shifting and Cannondale's tried and trusted platform - which Mat reviewed in January here -  will make a winner. For £2899.99, there's the option of standard Ultegra, the new 'grey'option, mind, and on one of the few red bikes in the range. Almost finally for £1999.99, there's Shimano 105. Both the standard Ultegra and 105 Super Sixes are available in 'Feminin' sizes and fit but with non-girly colour schemes. A real innovation though, and - possibly - our favourite bike of the range is the new white version of SRAM's Apex group built up into a reasonably-priced mountain killer for £1,899.99. Did we mention that we really like this one? And you can get it as a Synapse model as well. 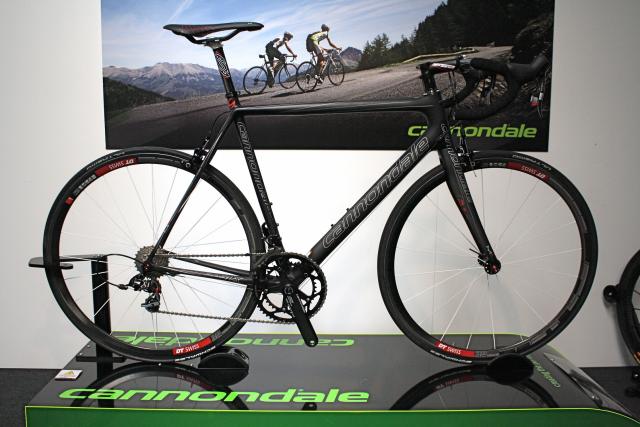 Saving the best to last, we'll direct you to Mat Brett's comprehensive article from the launch in May for the background and riding impressions on Cannondale's new 695 gram frame but what we've seen now are the builds and what they cost. Are you sitting comfortably? Your basic (with a chuckle) Super Six Evo will come in at £3,999.99 fitted with SRAM Red. Then there's standard Dura-Ace at £5,299.99. The Team Liquigas replica model fitted with a 'green' version of SRAM Red transmission and all the other parts unique to the pro team like a special Fizik saddle and Mavic carbon wheels is £6999.99. Almost finally, a Shimano Dura-Ace Di2-based Evo is £7,599.99 and sitting on top of the pile is the Ultimate with everything just chosen to be as light as possible for £8,799.99. According to Henning Schröder, even the four moulded monocoque parts that make up the frame are chosen for their weight, saving 20 grams he reckons, and the frame is minimally clear lacquered and liveried which is a further 50-or-so grams over a team painted and stickered model. 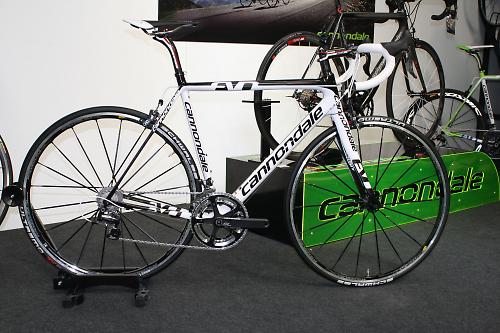 1
Egan Bernal hospitalised after crash with parked bus while training in Colombia
2
"If you're a competent driver it shouldn't cause any issues": Cyclists react to Highway Code change outrage
3
Press misrepresents Highway Code changes – just days before they come into force
4
Expect carnage and more danger...Mr Loophole rants about Highway Code changes to talkRadio's Mike Graham
5
Stages will retrofit a power meter to your existing cranks
6
Chris Boardman heads newly-launched government body Active Travel England
7
Near Miss of the Day 702: Must Get In Front lorry driver goes wrong way round pedestrian island
8
Government slammed for not informing public of Highway Code changes aimed at protecting cyclists and pedestrians just days before they come into effect