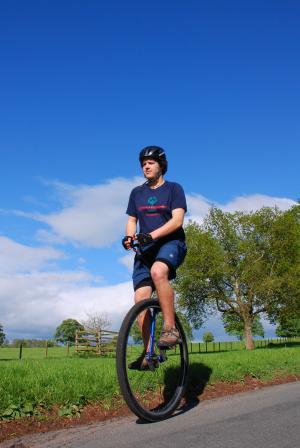 Jai is first to ride around Ireland on a unicycle

A wheel, an island and a thousand miles. Those were the simple components of an adventure undertaken and completed last week by Jai Caorthann, an 18-year old student raising money for The Special Olympics, Ireland and Brain Tumour UK.

Jai, a student of Adventure Media at the University of Cumbria, had the idea to undertake the first mono-wheeled circum-hibernian voyage as a way of raising money in memory of a school friend who died as a result of a brain tumour.

He set himself a very ambitious target raising 1p per rotation of his unicycle’s 36-inch wheel on the journey, a total of £5572.56.

Having completed the challenge last week he is some distance short of that target but has so far raised a highly respectable £1200 and there is still plenty of time for more donations to come in.

Last month, Jai and two-wheeled support-riding companion Seb Brooks rode 1002.6 miles in a clockwise direction in 22 days of which 18 were spent riding, starting and finishing in Rosslare.

The trip was not without incident, however, and Jai, who was born in Ireland but grew up in England, almost came to grief when his tyre blew out as he hit a pothole in County Mayo.

He told the Cork News: "That was probably the hairiest moment. And the problem was the tyre was very difficult to replace.

“Because it's a specialist tyre, I had to get it flown over from a shop in the UK. So that delayed me by a couple of days. But as it happened, the weather that weekend was atrocious. It was raining too hard and the winds were too strong for me to have got back on the unicycle anyway for those two days.”

As befits a student of Adventure Media, Jai is considering the mass communication opportunities afforded by his chosen method of transport.

He told the Cork News: "Tony Hawks wrote a book, 'Round Ireland With a Fridge', after he hitch-hiked around the country with his fridge, and there was also a movie recently made about it. I'd love my unicycle to have a similar legacy to his fridge, so it's certainly something I'll be looking into.

"But it certainly won't be the last of my unicycle trips. This is just the start of it and I'm already thinking about the next adventure."

You can help Jai get closer to his fund-raising target by contributing at http://www.justgiving.com/one-wheel-one-island.