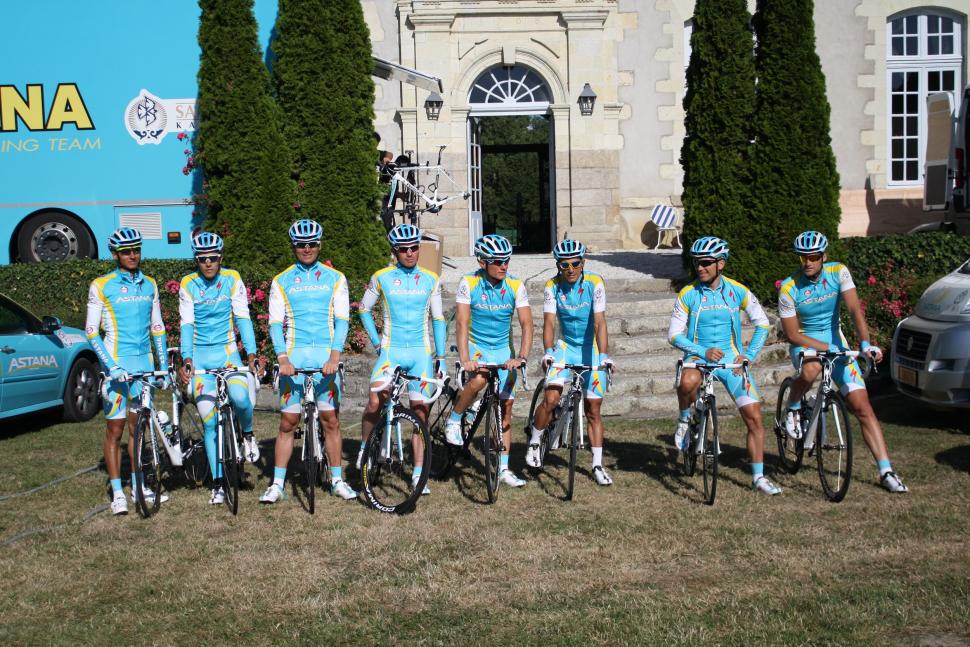 Team leader Alexandre Vinokourov (centre) flanked by his Astana team mates. Humbling to think that 10 days after this picture was taken Vino's career would be ended by a crash on Stage 9

Alexander Vinokourov’s often controversial career appears to be over, cut short after the Kazakh rider fractured his femur after falling into a ravine with 100km left to ride of today’s Stage 9 from Issoire to St Flour.

This year was to have been the 37-year-old’s final participation in the Tour de France as he prepared to move into management at Astana.

Following an attack yesterday it looked as if he might even claim the race leader’s maillot jaune for the first ever time before running out of steam in the last 2 kilometres.

However, he will not now finish the race in Paris, where in 2005, riding for T-Mobile, he secured perhaps the most memorable of his four stage wins.

He is still the last man to solo his way to victory on the Champs-Elysées, and one of only two to have won a road stage there in anything other than a bunch sprint.

Two years later in 2007, the year the Grand Depart was staged in London and the southeast to huge success, Vinokourov was thrown out of the race for blood doping and handed a two-year ban. He returned to the Tour last year, winning Stage 13.

This evening, the Kazakh was due to undergo surgery at the Hospital La Pitié Salpetriere in Paris on his fractured femur, which was confirmed by x-ray at the hospital in Aurillac where he was taken after the race.

Quoted on the Astana website, Vinokourov said: "I never expected such a dramatic end on the Tour de France. This is a terrible disappointment to me, I am so sad tonight. But I want to reassure me by telling me that it could have been much worse.

"The injury will stop me for quite a long time, and I will follow the Tour on television to support the entire Astana team. I know my friends of the team won’t forget me and they will do everything to win at least one stage. "

With the region having endured an unusually long spell of dry weather ahead of rain today, Dutch TV speculated that today’s accident could have been caused by a build-up of oil on the road.

Whatever was the cause of the first rider to go down, fellow Astana rider Dimitri Fofonev had a clear view of his team leader’s crash, escaping injury himself and being one of those who helped Vinokourov out of the ravine he had crashed into.

“We were well placed in the bunch, the pace was fast in the pack, and Garmin Cervelo and OmegaPharma-Lotto hardened the pace to take benefit of the descent to reduce the gap of the breakway,” Fofonev explained.

“The floor was a bit wet and we arrived to a very tight left turn. Ahead of us, they took a wrong trajectory, Thor Hushovd began to take his shoes off, a rider from Lotto just ahead of us wanted to cut a little to the left, whereas with Alexander we took the turn wide,” he added.

“The Lotto rider slipped and started to take us with him, and we found ourselves faced with a concrete column. We braked to avoid it and were forced to drop into the ravine. Alexander really hasn’t been lucky, he was ahead of me and he was stopped in its fall from a tree. I've crashed down and I got up immediately, I felt I had nothing serious.

“I told Alexander, "Come on, we go!” He answered, " Wait, not now, I think I have something broken!". So I came up to him and I wanted to lift him, but he was afraid that we make a bad move that could make him worse.

"I then saw the ambulance arrive at the top, next to the road and called for help, Remy Di Gregorio and Andry Grivko, who came down and helped Alexandre to go on the road, holding on their shoulders. At this point, we realized that Alexander could not continue.

“We went back directly on the race with the adrenaline but then we realized and it's really sad! Falls, it's part of the race, it's part of our sport, but today, we lose our leader, it's not easy to accept," Fofonev concluded.

Di Gregorio said that his first reaction was that Vinokourov would be able to carry on.
"When I arrived, I really believed that Alexander was going to return to the race,” he explained.

“I really hoped that, I could not believe it would end this way. But when we helped him to go up and we saw that he could not walk we understood.

“When we returned on our bikes, the first 10 km have been hard, we were still in shock. This kind of event shows that cycling is really a dangerous sport, I don’t want to overdo it, but sometimes we risk our lives. “

It's a shame for the team because we had worked around him. And it's sad for Alexandre, because he is a great person and for his last Tour, he deserved to finish in another way, he really had no luck. But we will continue the Tour de France to honor the team and Alexandre," he added.