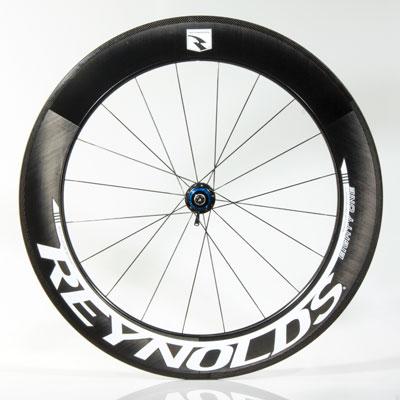 Deep Carbon rims will feature on Ag2r's bikes at the Tour... on the back, at least
by dave atkinson

If you thought that deeper section wheelsets were a flash in the pan then you'll only need the most cursory glances at the peloton heading out along the Vendée coast to dissuade you: there's going to be a lot of 50mm and deeper rims humming along towards Mont des Alouettes Les Herbiers on Saturday. And Ag2r will be going even deeper than that, with Reynolds' new Eighty-one wheel.

Can you guess how deep it is? Reynolds are embracing the simple approach this year. 81mm is a pretty deep section for road riding – indeed, Reynolds aren't really marketing the Eighty-One as a road wheel, it's more for the triathlon and TT market – but Nicholas Roche and his chums will be trying them out on the Tour's flatter stages. Not on the front, though. That would be silly. They're pairing the deep rear with a Forty-Six at the front. 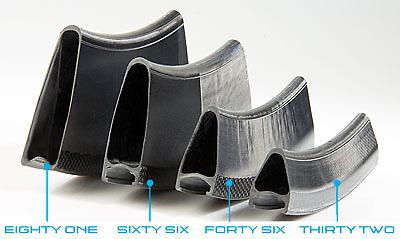 So what's new with the Eighty-One? Well, as you can see from the above cross-sections it's basically a development of the range using the same high modulus Carbon construction and Reynolds' CTg braking surface which, in conjunction with their Cryo Blue pads, significantly lowers rim temperature under braking.

The shape surprised us a bit. After talking at length with Paul Lew not so long ago about the RZR92 wheelset it was clear he was an advocate of a sharp leading edge on deep section wheelsets, something that sets the RZR wheels apart from the very blunted Zipp Firecrest shape. However, the Eighty-One isn't sharp. To be fair, it's not a Firecrest shape either; it's kind of in between, narrower than the bulbous Zipp but not at all sharp like the RZR. We haven't talked to Reynolds yet about the rationale behind the choice of that shape, but knowing Reynolds it won't just be a shot in the dark: they're pretty fanatical about their computational flow dynamics.

The Ag2r boys will be on tubs of course, but the Eighty-One is also going to be available as a clincher. Claimed wheel weight is 1600g/pr for the tubular version and 1800g/pr for the clinchers, which is pretty decent given the depth. Not that you're likely to have them as a pair; like the pros, most people will mate up a deeper rear with one of the shallower front wheels. You can buy Reynolds wheels as a pair in any combination from Thirty-Two, through Forty-Six and Sixty-Six, all the way to the new Eighty-One.