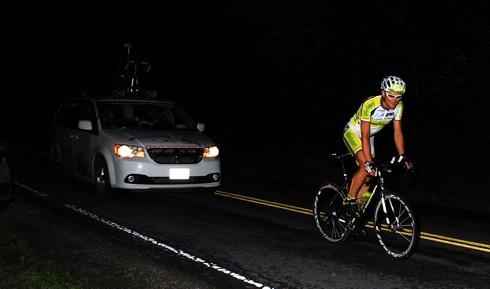 The 29-year-old Strasser had failed to finish the event in his only previous participation two years ago, but this time around he put in the third fastest average speed ever of 14.94mph, completing the coast-to-coast ride from Oceanside, California to Annapolis, Maryland, in 8 days, 8 hours and 6 minutes.

Speaking at the start of this year’s race, the Austrian rider had said: “Two years ago I was really fast in the beginning. I had a good start and a good first three days. Then in Colorado entering the Rocky Mountains I got problems with my lungs. I got pneumonia and had to quit the race. My oxygen intake was very low and I spent four days in the hospital in intensive care. Now I am back to get to the finish. I am very focused and very motivated.”

So motivated, in fact, that until he hit the Appalachians, the last mountains before the finish on the Eastern Seaboard, the rider who had distanced himself from previous second placed rider Marko Baloh in Utah had looked set to break the all-time fastest average speed of 15.4mph set by Pete Penseyres back in 1986.

Speaking at the finish, he said: “We knew that it was very close. My crew chief did some calculations about the record, but then we did not want to stress ourselves in the finish.”

He added; “When you see the pictures on our home page you will see that we had a lot of fun. But still we can be a hundred percent professional and serious about getting the job done. It is an honour to be here and a rider should push as much as possible.”

Amercian rider Mark Pattinson came home in second place with a time of 9 days 41 minutes. He’d claimed the same position in his maiden RAAM in 2007.

There were no British riders in the male under-50 category, but Brian Welsh from York is still out on the road in the over-50s category, which has already been won by Italy’s Alessandro Colo in a time of 9 days, 11 hours 2 minutes.

British teams Swift and Bold and RAAM Roses came second and third respectively out of the four entries in the 4-person Mixed under-50 category, won by Germany’s Sparkassen Racer by just 19 minutes.

There was a British victory, however, in the 8-person under-50 Open category, Strategic Lions, looking to raise money for the charity Help for Heroes, beating off competition from 12 other entries to win in 5 days, 9 hours and 14 minutes. The other British entry, Bike Mad, came sixth.

Full details of this year's race can be found on the RAAM website.