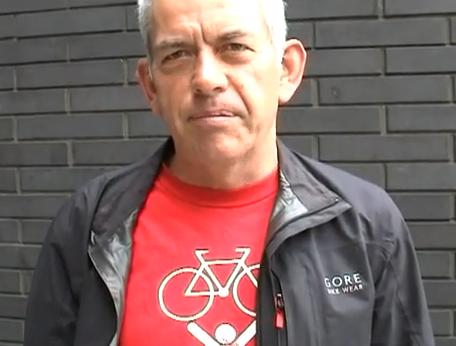 Barry Mason of Southwark Cyclists dies on holiday in Spain

Barry Mason, co-ordinator of Southwark Cyclists, founder of Greenwich Cyclists and organiser of the Dunwich Dynamo, has died on holiday in Spain. The 60-year-old drowned while swimming in the sea off Rodiles beach, Villaviciosa in Asturias on Thursday afternoon.

The father of two grown-up children had been on holiday with his long-term partner, Cheryl. Paramedics arrived in an emergency helicopter but were unable to resuscitate Mason, who is believed to have suffered a heart attack.

In March last year, Barry led the Critical Mass ride commemorating the memory of three London cyclists who had been killed by lorries on London’s streets in recent weeks, two of them in Southwark itself.

Tom Crispin of the London School of Cycling, writing in The Guardian, quoted Barry as saying "It was a wonderful, respectful and very moving evening that will help make a difference out there."

He also appeared last year in a London Cycling Campaign (LCC) video explaining the correct way to lock a bike.

Besides his cycle campaigning work, Barry also got involved in a host of community-based and environmental projects, and in recent years had been working as manager of the Surrey Docks City Farm in Rotherhithe.

For the past 12 years, Barry had been organising the Dunwich Dynamo, the overnight right from London to the Suffolk coast that takes place each July. The ride had begun in 1993, as legend has it when a group of couriers left a London pub one Friday evening, headed east, and didn’t stop till they hit the North Sea.

With the event growing year on year, Southwark Cyclists led by Barry took over responsibility for organising the ride in 2000, including organising a fleet of furniture vans and coaches to help get bicycles and their riders back to London on the Sunday.

Each year, Barry would end his own ride on the Dunwich Dynamo with a dip in the sea, a brief moment of personal time on what was otherwise a hectic weekend for him.

This year’s ride takes place on the evening of 16 and 17 July and while it’s not yet clear whether there will be any kind of commemoration, he certainly won’t be far from the thoughts of those taking part.

A message on the Lambeth Cyclists page on Yahoo! Groups highlights the affection with which Barry was regarded in the capital’s cycling community. In 2004, the London Cycling Campaign introduced a Cycling Personality of The Year category in its awards.

The reasoning, apparently, was that of someone like the broadcaster Jon Snow won, it would give a boost to cycling. Southwark Cyclists nominated Barry, and he ended up winning.

The poster, Cineely, takes up the story: “There was a feeling amongst staff and the board that this was not what was intended by the category and would be difficult to explain to people outside the campaign. As chair of the judges I agreed to ring Barry to ask him to turn down the award.

“He was furious, not with being asked to turn down the award, but with Southwark Cyclists for nominating him and with LCC members and award judges, not seeing that the point of the award was to gain publicity for the campaign, and had no hesitation in agreeing to my request.

“What struck me at the time was his humility, during our conversation I realised with amazement that part of his reaction was, don't be ridiculous I don't do anything out of the ordinary.”

Cyclists in South London and beyond mourning his loss could be forgiven for disagreeing with him on that point.