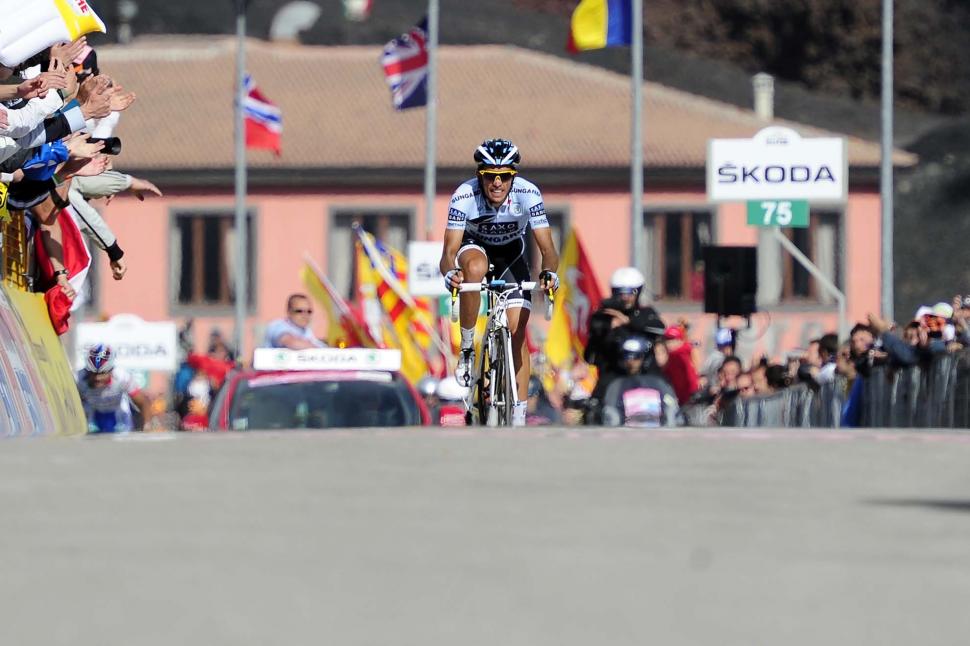 Yesterday, Alberto Contador answered critics in Italy who had suggested that he perhaps wasn't in the best of form during this year's Giro d'Italia by finishing second on Stage 8 to move up to fifth overall. Today, he topped that with a monumental performance in the second of the afternoon's ascents of Mount Etna, attacking with around 7 km left to win the stage from Jose Rujano of Androni Giocattoli.

Stefano Garzelli of Acqua & Sapone led a small but select group of overall contenders home to take third, but missing was Michele Scarponi of Lampre-ISD who lost precious seconds to his rivals.

Tomorrow sees the first rest day of this year's Giro and it was of course on the eve of a rest day in last year’s Tour de France that Contador claims to have eaten the contaminated steak that he says led to his positive test for clenbuterol.

While some query whether given the pending appeal over the Spanish federation's decision to clear him Contador should be racing in the Giro at all, one thing we will  discover over the next fortnight is whether Saxo Bank-SunGard has the depth to protect the maglia rosa.

Contador, of course, joined Bjarn Riis's team from Astana at the end of last season, but the Danish outfit is a very different squad to the one that helped Andy Schleck secure second spot in the Tour de France last year, with much of its rider roster and backroom staff moving with him over the close season to Leopard Trek.

With Contador throwing down the gauntlet to his rivals this weekend, there's already the danger of considering this year's Giro to effectively be a race for second place - at least until CAS makes its ruling in his case.

But with a series of mountain finishes coming in the last week and a half of the race, it's far too early to assign the final placings just yet, and it could be that Contador is trying to build a cushion now to give himself a decent lead to protect in the latter week of the race.

There had been fears earlier this week that organisers might have to rethink today’s stage after renewed volcanic activity on Etna saw a one-centimetre thick layer of dust cover the road in the closing kilometres of the second of the two ascents of the mountain.

As it turned out, towards stage went ahead as planned, and while some had predicted a day in which the overall contenders would be content to mark each other, the battle for the maglia rosa burst into life when Contador attacked 7km out, the only rider able to go with him being the Venezuelan climber Rujano.

After passing the survivors of the day’s breakaway, Contador finally managed to shake Rujano off inside the closing kilometre, the Androni Giocattoli rider, 3rd overall in the 2005 Giro, coming home in second place, three seconds behind the Spaniard, overall winner in 2008.

Behind them, other riders were suffering due to the heat as well as the pace of the climb. Those included HTC-Highroad’s Marco Pinotti, third overall this morning, who was dropped in the early part of the final climb, and Rabobank’s Pieter Weening, who started this morning in the race leader’s maglia rosa but saw his grip on it loosen well before the finish.

One of the losers today was Lampre-ISD’s Michele Scarponi, together with Contador and Liquigas Cannondale’s Vincenzo Nibali one of the three big pre-race favourites, who lost nearly a minute and a half to Contador and 17 seconds to his other rivals.

Scarponi had tried to go with Contador when the Saxo Bank-SunGard rider first attacked, but soon fell back to the group containing most of his rivals, including Nibali, HTC-Highroad’s Kanstantsin Sivstov, who remains second overall, and Roman Kreuziger of Astana.

Worse for Scarponi, he found the pace being set by that group as the riders sought to limit their losses to Contador too much too cope with and was quickly spat out the back, eventually crossing the line with half a dozen riders a little more than a quarter of a minute after the Nibali group.

While much of the attention before the stage had been on Nibali, born in Messina where today’s stage got under way, it was another native of Sicily who was prominent in today’s break, Italian champion Giovanni Visconti of Farnese Vini-Neri Sottoli.

An estimated 1 million people had turned out to cheer the riders on, and Visconti wasn’t the only useful rider in the break, with other members including Yaroslav Popovych of RadioShack, Jan Bakelants from Omega Pharma-Lotto, Alessandro Vanotti of Liquigas, Movistar’s Pablo Lastras, Filippo Savini of Colnago-CSF, BMC’s Mathias Frank and AG2R’s Mikael Cherel.

After heading down off the first ascent of Etna to pass through the coastal town of Acireale, the group began to split up as the road rose upwards again ahead of Contador seizing control of the race.

Today was the Giro’s third visit to Europe’s most active volcano. The first visit was in 1967, when Italy’s Franco Bitossi, riding for Filotex, beat the Spaniard Aurelio Gonzales. The next visit was in 1989, with the Portuguese rider Acacio Da Silva of the Carrera squad taking the maglia rosa here as he beat Colombia’s Lucho Herrera, with the Swiss great Tony Rominger third.

This evening, the riders are due to make the transfer to the Adriatic coast ahead of tomorrow’s rest day, with racing resuming on Tuesday with the 159km Stage 10 from Termoli in Aquila to Teramo in Abbruzzo.