It’s always interesting to check out the pro’s bikes at big races, and we got busy snapping away ahead of the Giro d’Italia’s opening stage in Turin on Saturday.

Italian UCI Professional Continental team Farnese Vini-Neri Sottoli are on Cipollini bikes. This (top) is the RB1000, made from T1000 and M46J carbon fibre, with a frame weight of 1,050g. The groupset components are Shimano Dura-Ace with Di2 electronic shifting, and the wheels are from Lightweight. That Mavic on the back there is just for warming up on the turbo.. 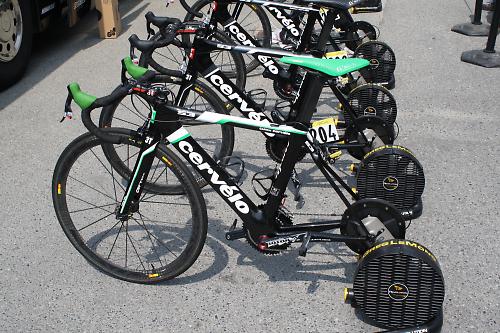 Speaking of turbos, Garmin-Cervélo warm up with their S3s on LeMond’s Revolution bike trainers where you remove your rear wheel and mount the trainer between the dropouts. You use a cassette that is fixed on the trainer so there’s no tyre/roller connection to worry about, and you get a very realistic feel.

The Garmin-Cervélo team are one of the many using SRAM’s Red groupsets along with Rotor chainsets and Mavic wheels. 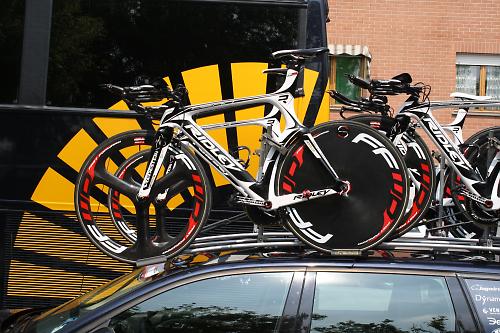 Vacansoleil are on Ridleys and for time trial duties, like Saturday’s opening TTT, that means the Dean - that'll be put away though now until the final individual time trial in Milan, stage 16 is also an individual TT but of the mountain variety so we're guessing they'll be going light weight rather than aero for that. 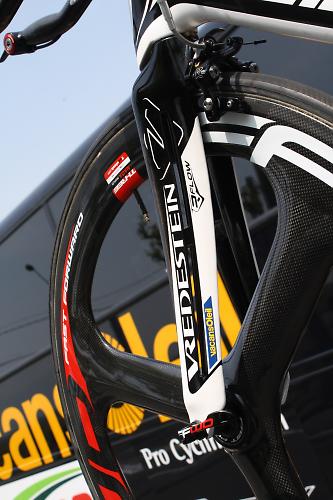 If you look carefully (you might need to put your reading glasses on) you can see the strip of R-Surface textured paint down the leading edge of the down tube. They reckon it reduces drag by 4%. Well, that’s what they say – we’re just reporting it.

Each leg of the R-Flow fork is dual-bladed; there’s a tiny gap down the middle designed to draw turbulent air away from the spokes and reduce drag. 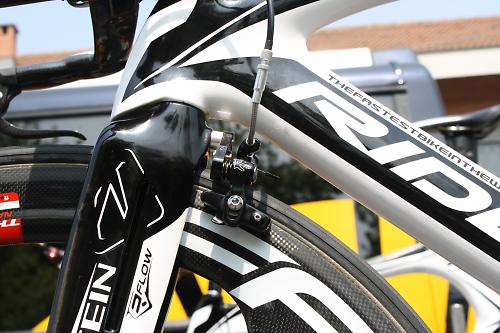 The front brake is tucked away behind the fork while the rear one lives just behind the bottom bracket. The down tube proudly boasts, “The fastest bike in the world”. 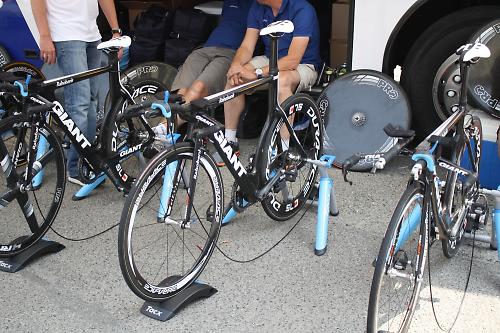 Funnily enough, that’s the same claim that Giant make about their Trinity Advanced SL, as raced by Rabobank, and that Trek make about their Speed Concept. In fact, they all reckon their own TT bike is the fastest in the world. 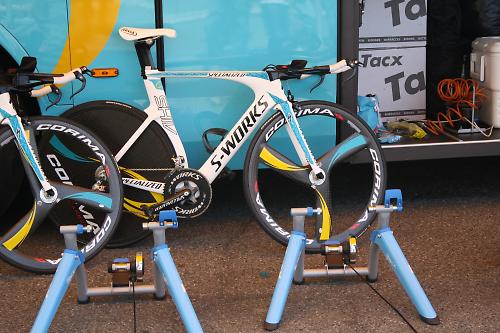 Here’s another contender: the Specialized Shiv in nose cone-less, UCI-friendly format. If they gave out prizes for looking fast, the Shiv would definitely be in with a shout. This is one of Astana’s bikes although Specialized also sponsor Saxo Bank and HTC Highroad, who finished fastest by a margin in the team time trial. 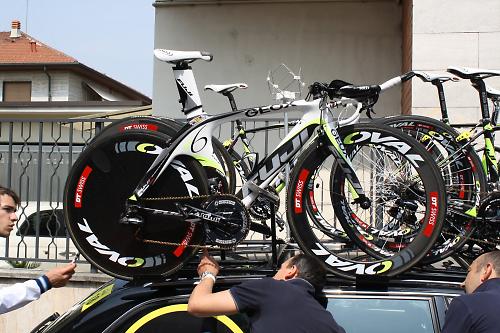 Geox-TMC are on Fujis – D-6s for time trial duties. The frame is made from high modulus carbon and although the rear brake is positioned in the usual place it is it’s pretty much shrouded by the seatstays. 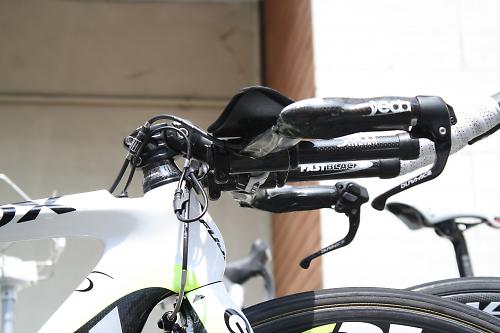 Geox-TMC use Di2 shifting and the cables run internally. We reckon they could have tidied it up around the head tube, though. 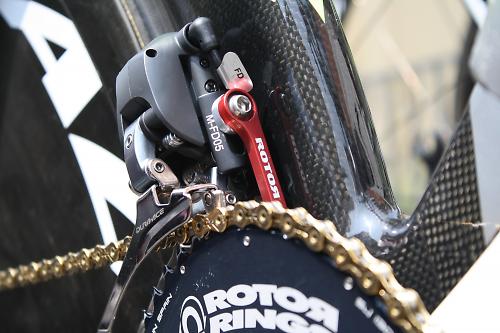 That little red gizmo, by the way, is a chain catcher. It simply stops the chain coming off the chainring and onto the frame. 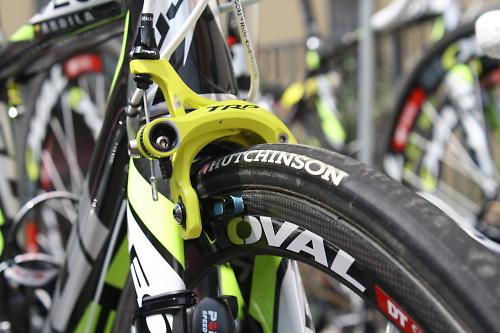 What’s going on with these TRP brakes on the Geox-TMC road bikes? At first we thought these R970SLs, which we reviewed on road.cc last year. We’d say these are they, but with a modified means of release for quicker wheel changes out on the road (we could be wrong).  These are the new R970EQs, which will be available in July, the arms on both the R970SLs and R970EQs are made from forged and machined magnesium with titanium hardware and, says TRP, weigh 114g and 110g respectively. In fact TRP/Tektro make the brakes on all the TT bikes we've pictured here and their new TTV brakes are aboard Lampre's Wilier TT bike. 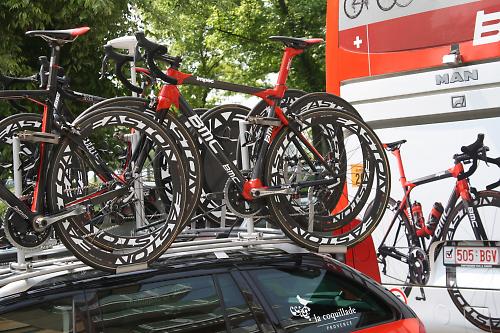 BMC Racing Team are riding BMC Impec and Team Machine SLR01 road bikes with Shimano Dura-Ace components and Easton wheels. The Impec is robot-built from carbon tubes that are manufactured on-site. Instead of placing carbon sheets in moulds by hand, BMC weave carbon fibres into seamless tubes which allows them, they say, to control the form and load-bearing properties of every tube as much as possible. The tubes slot into injection-moulded composite joints, a process BMC call their Shell Node Concept. They’re not lugs, though. Oh no. 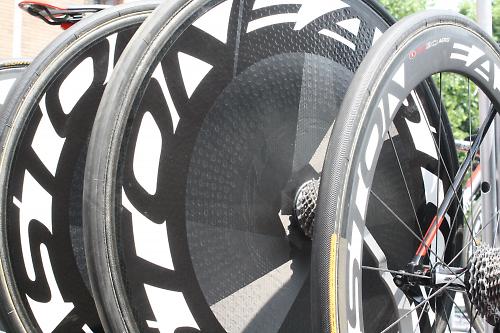 Take a close look at the disc wheel. The one with Easton logos and the dimples like those that Zipp do. And the word Zipp just about legible in the middle. Well, whaddya know? It’s a Zipp Super-9. A lot of that goes on in pro cycling. 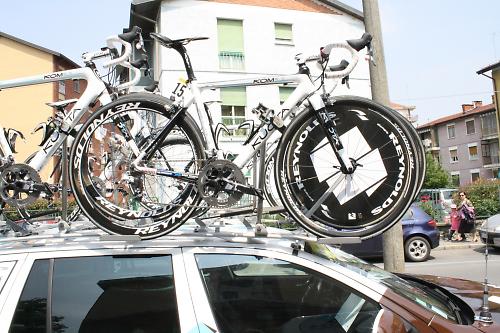 AG2R La Mondiale ride Kuota KOM Evos on the road with SRAM Red and Renolds wheels. Like the vast majority of bikes in the pro peloton, the KOM comes with a BB30 bottom bracket for additional stiffness. 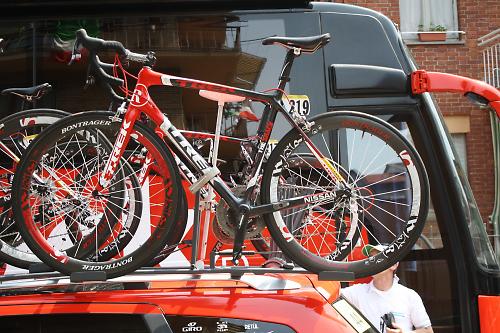 The former team of Lance Armstrong, Radio Shack can only be on Trek Madones with wheels and most other components from in-house brand Bontrager. These wheels look like Aeolus 5.0s, designed in collaboration with aerodynamics guru Steve Hed. A US squad, they run SRAM Red groupsets. 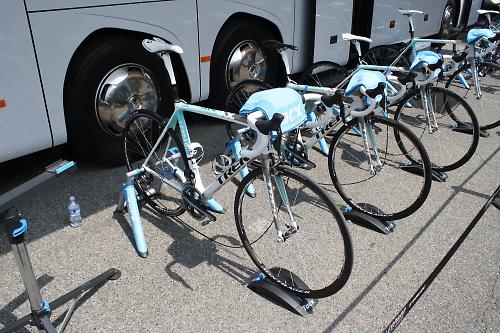 Leopard Trek are on Madones too, obviously, again with Bontrager components, although the groupsets are Shimano Di2. 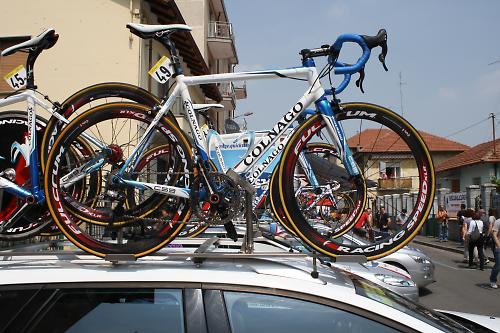 Colnago-CSF Inox are an Italian pro Continental team (although they’re registered in Ireland) that has a place in the Giro. They’re on Colnago’s new C59 road bikes which are built in Italy. With that clover-profiled down tube, it has to be a Colnago. The chainstays and seatstays are square section. They’re one of the few teams in the race running Campagnolo groupsets. 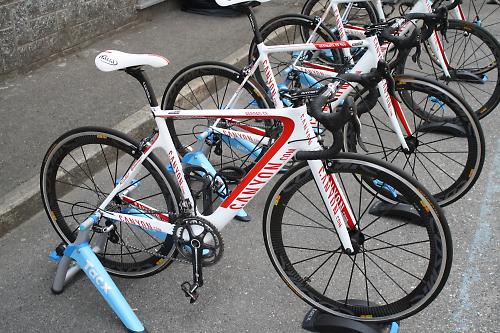 Omega Pharma Lotto use both Canyon Aeroad and Ultimate CF SLX road bikes depending on the course profile. The Ultimate is lighter, the Aeroad is more aero so the riders choose accordingly. The Aeroad has a lower cockpit and the frontal area is 20% smaller than that of the Ultimate, and the tubes are shaped to reduce drag.