Skinsuits, TT helmets and aero shorts to be banned at Giro? Probably not
by Tony Farrelly

Bont, the Australian cycle shoe maker whose Crono time trial shoe was last week banned by the UCI are not going to take it lying down. "We are going to fight this, treat me differently and discriminate against my company and I won't accept it," the company's chief executive, Steve Nemeth told road.cc.

Bont argues that the UCI has unfairl singled their shoe out and that if the UCI enforced the rule under which the Crono was banned evenly all aero clothing would be banned. Mr Nemeth still hopes to resolve the situation amicably and has even offered to present Bont's case in person to the UCI (an offer the UCI have yet to respond to), but having taken legal advice he believes that if forced to go to law the company has a strong case to have the ban reversed on the grounds of both restraint of trade and an unfair application of the UCI's own rules.

The Crono was banned under section 1.3.033 of the UCI's technical regulations which says:

“It is forbidden to wear non-essential items of clothing or items designed to influence the performances of a rider such as reducing air resistance or modifying the body of the rider (compression, stretching, support).

Items of clothing or equipment may be considered essential where weather conditions make them appropriate for the safety or the health of the rider. In this case, the nature and texture of the clothing or equipment must be clearly and solely justified by the need to protect the rider from bad weather conditions. Discretion in this respect is left to the race commissaires.

Equipment (helmets, shoes, jerseys, shorts, etc.) worn by the rider may not be adapted to serve any other purpose apart from that of clothing or safety by the addition or incorporation of mechanical or electronic systems which are not approved as technical innovations under article 1.3.004.”

Nemeth points out that the UCI have already set a precedent by not enforcing their rules on clothing, rules he, and many others (and presumably a large part of the UCI too) see as being hopelessly outdated anyway.

Tomorrow the Giro d'Italia starts with the team time trial, skin suits and aero helmets will be much in evidence seemingly without a murmur of complaint from the UCI. In the wake of  Johan Van Summeren's victory at Paris Roubaix Castelli have made much of the performance enhancing properties of their Free Aero Bib Shorts – were the UCI to follow through on the logic of the Bont ban Van Summeren's win would now be in doubt.

Given that the UCI forbids clothing that "reduces air resistance" it is an indication of the weird logic by which the organisation operates that one of its corporate sponsors, Santini is a renowned maker of aero skin suits and shoe covers, while another Shimano, produces highly regarded aero optimised componentry – the sport's governing body would appear to be having it both ways.

Shoe covers are a good example of the nonsensical nature of the UCI's position, designed to protect shoes from bad weather aero version are much in evidence in the velodrome – places not noted for either rain or mud so it's difficult to see how they can be "solely justified by the need to protect the rider from bad weather conditions." The UCI's get out here is that "Discretion in this respect is left to the race commissaires."

It would seem that while commissaires have little problem with weather protection for indoor cyclists they do have a problem with Bont's Crono shoe. Bont understands that their problem with the UCI started at the recent Track World Championships in Appledoorn when the representative of a national federation complained to the commissaires about the Crono shoes worn by a Russian rider to a silver medal position – the commissaires didn't like the shoe and referred the matter upwards.

As ever with the UCI it would seem that the politics of the track and the need for the UCI to keep national federations happy will have an impact on the rest of cycle sport, the cycling industry and the wider cycling public – the UCI's clampdown on innovative bike design is ascribed by many in the know to pressure from some national federations put out by what they viewed as the technologically assisted rise of the GB track team.

The UCI has yet to explain to Bont or anyone else how it justifies banning the Crono shoe while not at the same time banning aero helmets (the new Giro Selector even has interchangeable aero tail sections), skin suits, compression clothing, shoe covers, aero bib shorts etc etc. Perhaps tellingly the UCI did not issue a press statement when they informed Bont of the Crono ban, in fact Bont didn't even know there was a problem until the company received an email to the contact address on their website from the UCI telling them that the shoe was banned.

"The only consistent thing about the UCI is how inconsistent they are." He also condemned their communication with his company as "astoundingly vague, no warning, no email, no phone call, they went to our website and sent us an email."

The outcome of the UCI's action against Bont and the company's response will be looked at with interest by the rest of the cycling industry and the cycling public and judging by the comments on Bont's Facebook page sympathies lie firmly with the Aussie shoe maker. 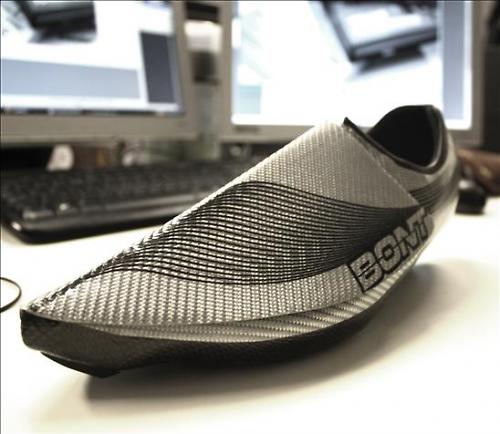