We've got our hands on Trek's top-of-the-line TT/tri bike... and it's pretty darn sexy
by Mat Brett

The Speed Concept is the fastest bike in the world. That’s what Trek reckon, anyway. And out of all the Speed Concepts they produce, this is the top model. Yup, this promises to be some bike.

At the heart of things is Trek’s KVF tube shape. KVF stands for the Kammtail Virtual Foil, and the idea is that it’s a 5:1 airfoil shape, but with the tail cut off. Huh?

Imagine at one stage the tube was five times as deep as it was wide, and shaped in the wind tunnel to be ultra slippery. The only trouble is, that’s not great in a crosswind. For a start, that’s a helluva lot of tubing to catch the breeze and affect the handling. And the airfoil doesn’t retain its full benefit when the wind’s at yaw (coming at an angle, basically). Plus, a 5:1 ratio falls foul of the UCI’s rules on tube shaping; it ain't allowed. 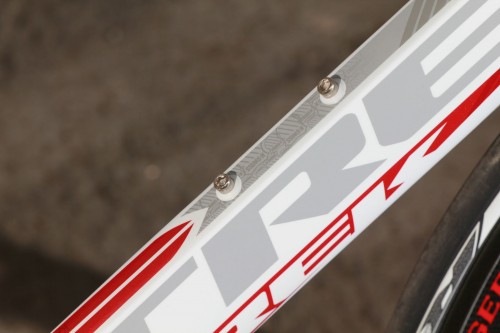 So, Trek have chopped the back of the tube off, and the air behaves almost the same as it would if the full tail was still there. The real benefit is that the KVF shape retains its aero performance at yaw; there’s lower drag in crosswinds. Plus, it means Trek can use less material and produce a lighter frame.

Make sense? That’s the story from Trek, anyway. And apart from the tube shaping, the Speed Concept boasts a whole bunch of other aero features. Most obviously, the front and the rear brake callipers are built into the fork and the frame respectively. They’re virtually invisible… and that means they’re well hidden from the wind too. In fact, look at it head on and you might miss this bike altogether. 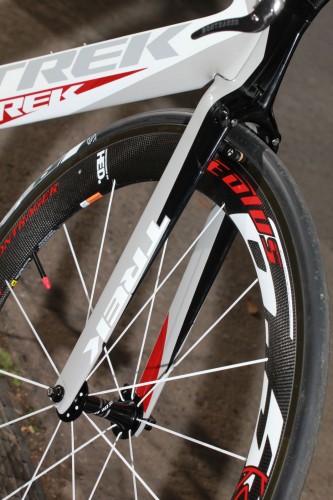 The Bontrager SC fork comes with KVF-shaped legs and integrates neatly with the frame, and there’s no stem in the usual sense. Instead, the Bontrager Speed Concept aero bar mounts to the top of the fork. Kind of. Take a look at the pics and you’ll get the idea.

The cables run internally, naturally, there’s a computer sensor tucked away in a little recess in the chainstay, and that curious arrangement behind the seat tube is a storage box for a spare tube, multi-tool, energy gels and so on. The bike is actually more aero with it fitted than without. Even the quick release skewers on the wheels integrate into the rest of the bike to reduce drag. Honestly. As for the spec, the 9.9 comes with a SRAM’s top-level Red groupset. We wouldn’t be seen on anything less, dah-ling. Nearly everything else comes from in-house brand Bontrager, including the Aeolus 6.5 wheels.

That’s plenty of information for you to be going on with. To be frank, we’ve been more than generous with our time given the fact that we’ve got a £7,500 bike here that’s just waiting to be ridden. With that in mind… pip-pip. We’ll let you know how we get on when we’ve got a few big rides under our, um, skinsuit.