More from the Boardman 2011/12 range launch
by Tony Farrelly

There's a lot going on in Boardman's new Performance range for 2011/12 including some very nifty looking hybrids and a do it all disc equipped crosser… while  on the road side of things start off with a bike that could just as easily be in the elite series.The Pro Carbon, has got an AiR frameset for a start and is little more than a down spec on the AiR 9.2. Save for a different bottom bracket, FSA Energy rather than an FSA SLK chainset and Mavic Equipe wheels rather than Mavic Cosmic's that adds up to just over a pound of extra weight but at £1799.99 a £500 saving on the AiR 9.2. 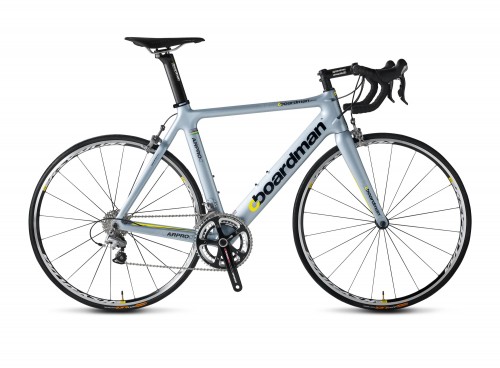 Intriguingly since we posted our story on the Elite series Boardman seem to have added two new models to their Elite ranges the AiR 9.0 and the SLR 9.0 (either that or I wasn't paying close enough attention on my last visit) No price details on these bikes yet, but on spec the AiR 9.0 would seem to be the Carbon Pro with a touch more Ritchey finishing kit. That said it is both the same claimed weight, 17.6lb but this time in metallic red… as it the SLR 9.0. We'll certainly be interested to see the pricing on those cos it makes you wonder why you'd buy the Pro Carbon apart from colour preference. 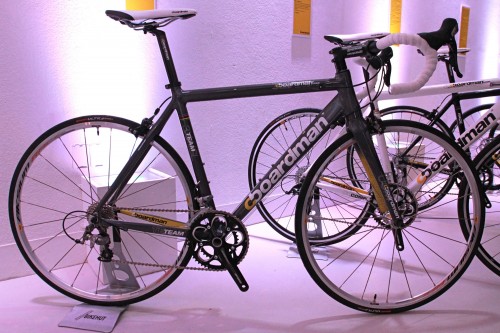 We've already mentioned the Team Carbon which apart from the addition of that BB30 is the only bike that doesn't change that much in the Boardman range, but then why tinker with a classic. It's aluminium sibling the Team does get a new frame though and at £999.99 it joins that select club of BB30 equipped sub £1000 road bikes, a pretty exclusive club it is too with the current membership not stretching much beyond Cannondale's entry level CAAD 10. One other thing to mention on these two bikes is that they are £100 more expensive than their 2010 equivalents maybe that's down to the addition of the BB30 or that and the pounds diminished buying power.

Other nice touches for the money include an all carbon fork slotting in to an asymmetric head tube, FSA Gossamer compact chainset, Shimano 105 drivetrain and Mavik Aksium wheels with Conti Ultra Sport tyres. Brakes are Tektro R580s and the rear brake cable is internally routed. The frame is triple butted, thin walled but reinforced where it needs to be and the welds are so smooth you could be forgiven for thinking it is carbon, at a claimed 18.6lb (8.4kg) its weight won't give it away either and there's significant scope for further lightening. Sizing for all Boardman road bikes is the same XS, S, M, L, XL and geometry is consistent too with 405mm chainstays all round and 73° parallel angles on all but the two smallest sizes.

However there are differences, Boardman describe the geometry on their performance road bikes as "sportive race" – on the Team Carbon and the Team head tubes on most sizes go up by 1cm over the elite models, so still fairly aggressive and on the racier end of the sportive/race spectrum. Going further down the range head tubes get taller still for a more upright riding position. 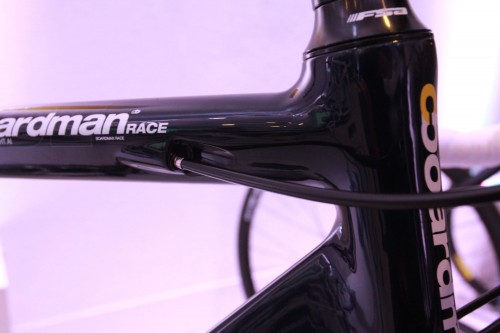 Aside from the geometry many of the design elements of the carbon bikes are also present here, that asymmetric headtube/steerer and those box section chainstays for instant power transfer, the Team does get some curves though in the form of wishbone seatsays for improved rider comfort a feature it shares with its stablemate the Team Carbon.

The Comp is the same triple butted alloy frame and full carbon fork but this time built up with a SRAM Apex 50-34 compact chainset matched up to that hill killing 12-32 cassette. The Comp loses the BB 30 though and has downspecced wheels: Mavic CXP22 rims laced to Formula hubs. Weight goes up to 20.2lb (9.16Kg). At £799.99 it's a lot of bike for the money. Another Boardman we can see setting the cat amongst the pigeons is their new entry level Race model. So you get the triple butted alloy frame used on the Team and the Comp, as you'd expect the BB30 is ditched as is the all carbon fork, the Race gets a carbon/alloy steerer version all the other frame elements are in place though.

Componentry is Shimano Sora for the shifters and rear mech, a Microshift front mech, FSA Vero compact chainset, Tektro R358 brakes, the same wheel package as the Comp and pretty much identical finishing kit too. Weight climbs slightly to a claimed 20.6lb (9.34Kg). It'll be up against some benchmark setters from Giant, Specialized and Trek, but it looks capable of giving them a run for their money and this is one bike we can see really benefiting from the Halfords connection – surprising really that Boardman didn't do it earlier. 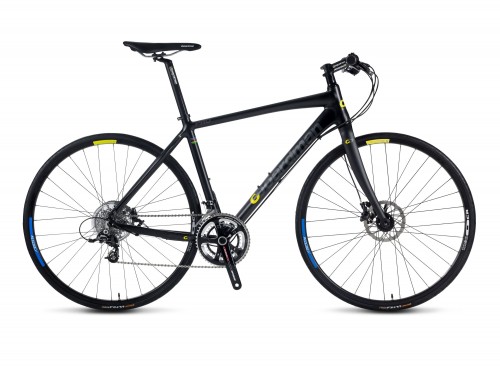 We liked Boardman's original Hybrid range and their certainly looks to be a lot to like about the new models. There are four, the Pro, Team, Comp and Race mirroring the models in the road range. The frames are made from the same triple butted alloy tubeset as the road bikes except with the addition of rack and mudguard mounting points and longer (425mm) asymmetric chainstays which accommodate read disc brake mounting points – they should also make for a smooth ride too. The other noticeable difference is that the frames are more aggresivly compact with a lot more seat post showing. The actual ride position on all three models looks to be closer to the racier end of the Performance road bike range. 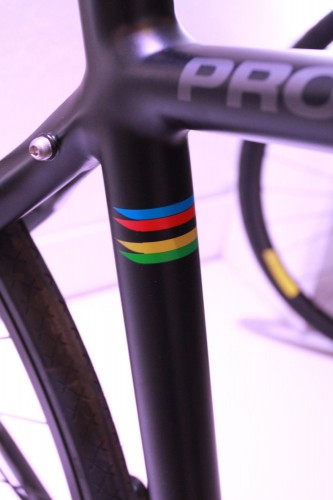 Standout bike is the range topping Pro at £999.99 for those that want to get to work in a hurry. For all out performance it boasts a BB30 bottom bracket (don't think we've seen a hybrid with one of those before) and an all carbon fork. Drivetrain is SRAM Rival and the brakes are Avid Elixir 5s stopping Ritchey Pro Disc wheels with Conti Ultra Race tyres. All up weight is a claimed 20.5lb (9.29Kg) so it's no slouch in the weight department. Given that it can take rack and guards this really has the makings of a performance all-rounder, we're guessing you could even stick some cross tyres on it for some off road action.

If we were spending our own money though we'd probably opt for the Team, it's a pound heavier, 21.6lb (9.79Kg) but £200 cheaper it's based around the same frameset as the Pro but with SRAM Apex instead of Rival, down-specced hubs in the wheel package and Avid Juicy 3 discs. In fact it's a shame they don't do a drop bar version. 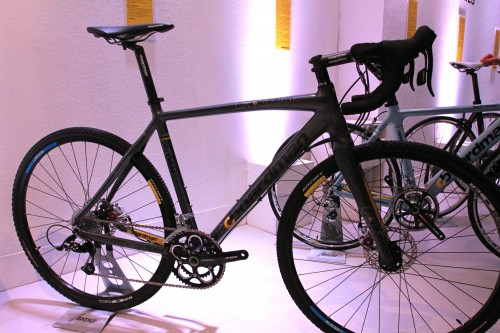 As it turns out they sort of do in the shape of Boardman's CX range of UCI legal disc brake equipped cyclocross machines which, says the blurb is our new best friend the cross bike you can race but which is equally at home on the daily commute. Yes, it's on our list to test. 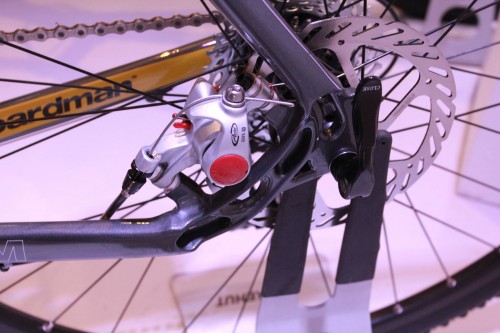 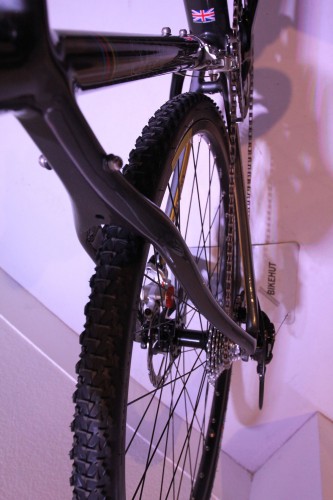 All the CX bikes get some variation on a wheelset built around Ritchey Pro Disc rims. As far as we can see the frames themselves share the same tubeset DNA as their alloy road and hybrid siblings – essentially it's an amalgam of the two with some necessary cross specific touches such as a higher bottom bracket and longer chainstays (435mm) and therefore a longer wheelbase for a more stable ride. The only one of the three we've got an indication on pricing about at the moment is the CXTeam which is already available at £899.99. The Boardman 'cross bikes are available in four sizes; S, M, L, & XL. Not sure whether all models will be available in the UK, but the Team is already on sale. 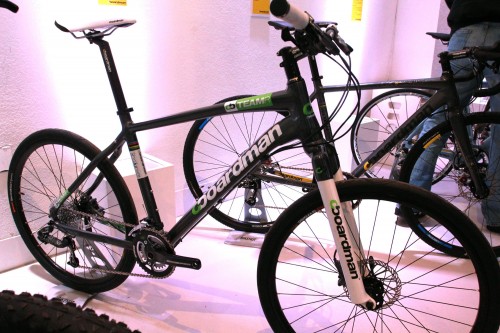 Another machine made for both trail and tarmac is the HT TeamR during the week a rigid urban mountain bike sporting s set of Continental Sport Contact slicks, but at the weekend transforming (with the aid of a set of knobbly tyres) in a trail capable rigid XC mountain bike. The main frame is Boardman's favoured triple butted aluminium matched up to a beefy looking full carbon fork. Gearing is SRAM X7 2x10 speed, braking is taken care of by Avid Elixir 3 disc brakes. The whole lot weighs 23.8lb (10.79Kg) it'll be available in three sizes: S, M, L and will set you back £849.99. 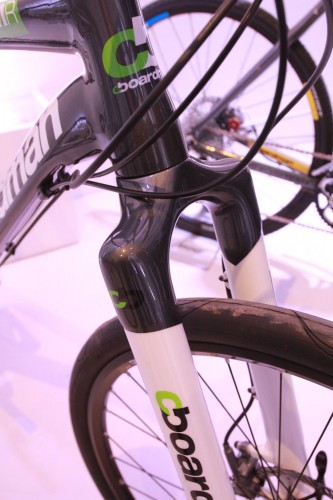