Boardman Bikes are really ramping things up for 2011/12 with new Elite and Performance ranges for the road. There are two new top-end carbon road frames plus a BB30 revamp for an old favourite. All that adds up to 14 new carbon models (and a top end TT bike on the way) plus new versions of their aluminium stalwarts the Road Team and the Road Comp. That's not all: there's also a new cyclocross bike and three new performance hybrids… and lots of BB30 bottom brackets.

Standout items look to be the the new Air aero road bikes, and the SLR lightweight machines… so that's all of the Elite range plus the new Road Pro Carbon which also uses the new AiR aero road frame, a new entry level road bike, the Road Race, and a very fancy looking performance hybrid, the Hybrid Pro.

In fact, every frame bar one, in both ranges, is new. There's none of yer new colours on last year's bikes here, which is why Boardman only do range launches every two years - when they've actually got something new to launch. Mind you, the new paint job option is a bit of a non-starter anyway given that Boardman's colour palette for their road bikes has not really strayed beyond either all black or all white with maybe the odd grey hybrid thrown in to the mix… until now. The 2011 road range sees a tentative step away from monochrome in the shape of the new Road Pro Carbon in what I'd be tempted to call blue steel. 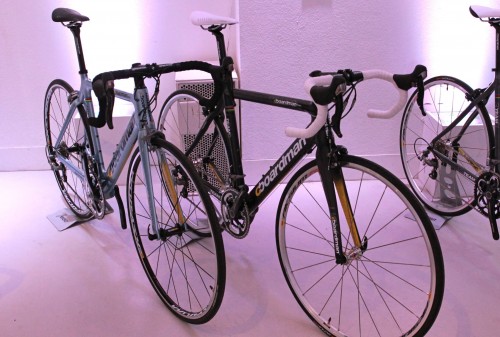 The new road bikes will have a hard act to follow: Boardman made a real splash with their first range of road bikes when Nicole Cooke rode one to an Olympic Gold and World Championship double in 2008 - with Boardman offering the same frame decked out with different componentry for a mere £1,600 in the guise of the Pro Carbon. The Team Carbon uses the same mould but a different carbon lay up for £1,200.

Both machines were real benchmarks, and although the word 'classic' gets bandied around all too easily these days, these machines both have a claim on the word because not only do they combine superb value but they are corking bikes to ride too. No surprise, the,n that the Team Carbon lives on pretty much unchanged except for the addition of a BB30 bottom bracket. 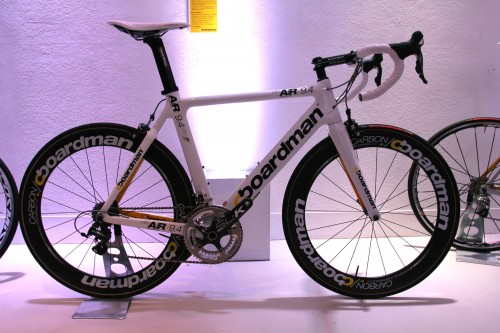 For 2011/12 Boardman roll out a greatly extended Elite range with a choice of two distinctive frames with three different builds for each. The AiR range of, yes, aero road bikes represents the biggest departure from what Boardman have done before.

Boardman weren't showing the range-topping AiR 9.8 used by their sponsored riders at the launch, but they did have the 9.4 and the 9.2. As far as we can see the only difference between the models is the spec packages. Oh, and the 9.4 is white. All share the same monocoque construction in high modulus carbon, with the pretty much compulsory asymmetric head tube and a full carbon fork. 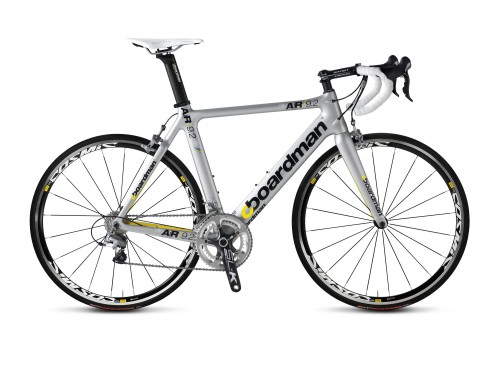 According to the guys at Boardman, the AiR bikes are made with the demands of both the road racer and the triathlete in mind. There is a TT version in the pipeline so we will be intrigued to see if turns out to be same frame with tri bars etc. or a new frame – Boardman sponsors the triathlete Alistair Brownlee who will be riding an AiR this season.

The two top models come with deep section wheels. For the 9.8 that's Zipp 404 tubulars while the 9.4 gets 50mm cboardman carbon clinchers; the 9.2 gets Mavic Cosmic Elites. The frames themselves have been honed in the wind tunnel and the computer with great emphasis put on getting the most aero benefit out of real world conditions - cross winds and blustery gusts with the down tube, seat tube and seat post designed to deal efficiently with cross winds down to an angle of 20 degrees. 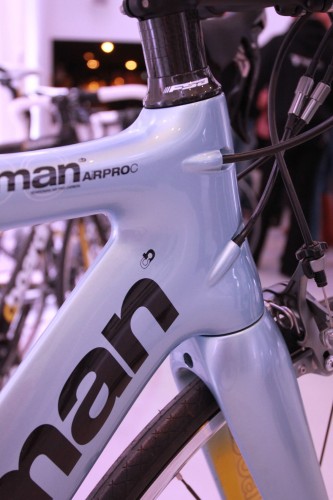 With the choice of SLR or AiR models, Boardman are following the current trend of dividing their performance ranges between aero road bkes and something for the weight weenies and climbers with an ultra-light model too. Aero road does seem to be the coming thing, but bike companies have spent a long time fostering the cycling world's obsession with weight so no surprise that there are plenty of people still more inclined to choose the lighter bike over the more aero option.

Not, it has to be said, that the AiR's can be considered in any way lardy – the AiR 9.8 weighs a claimed 15.4lb with the 9.4 coming in at 16.2lb and the 9.2 at 16.5lb; the claimed frame weight is a none-too-shabby 1.2kg. Aside from aero advantage, snappy, stable handling is also the name of the game here too. All of Boardman's bikes are designed to be stiff where they need to be. His work as chief tech guy for Team GB has left Chris Boardman a firm believer in the advantage of the BB30 bottom bracket system when it comes to transferring every ounce of pedalling effort to the back wheel as quickly as possible - no surprise then that FSA BB30 bottom brackets feature throughout his elite range of bikes and prominently in the performance range too. 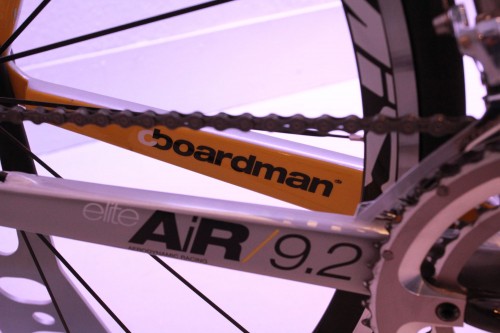 Immediate power delivery to the back wheel is further aided by short, straight box section chainstays. One of the Boardman mantras is "the shortest distance between two points is a straight line" and every curve has to earn its place. There aren't many on the AiR bikes although all those straight lines are smoothed out with rounded edges which gives them a more organic look. 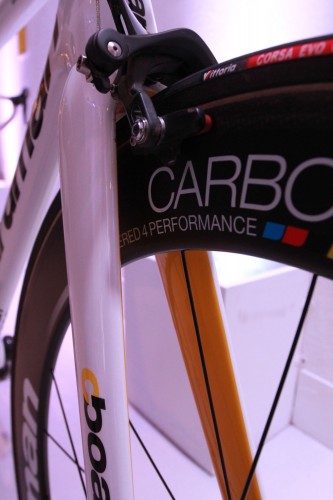 Flat surfaces on the inner faces of both front and rear forks are designed to work with deep section wheels and ensure that airflow smoothed by the wheel isn't disturbed by a more traditional rounder section fork blade. This approach is something you'll find on all the top aero road bikes including the Cervelo S3 to which, as has already been remarked, the Boardman's AiR frames bear a passing resemblance.

That shouldn't be too much of a surprise given that both are designs honed in the wind tunnel and, as has been said here before, given that the laws of physics are immutable it's more surprising that all aero optimised bikes don't look the same. What most of them do share is a deep section downtube, internal cable routing and a fair amount of melding together at the point where the top, down and head tubes meet. The AiRs are no different on that score. 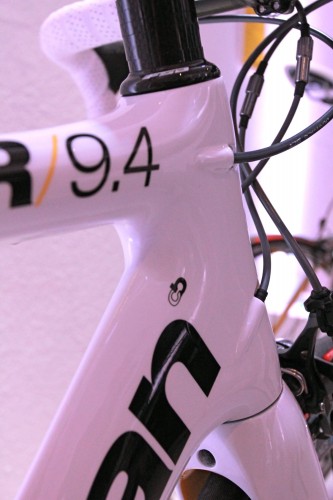 In the flesh rather than a two dimensional picture, the differences between the Boardmans and the Cervelo S3 are more apparent. For a start, the S3 is much thinner in section. Where the junctions at the headtube on the AiRs is shorter and rounder front to back, the S3's is thinner and longer. Similarly, while the seastays on the AiRs might be thin, those on the S3 are positively skinny, and while they may share chunky, box section chainstays, those on the S3 don't have quite the same abrupt cut off before the dropout - which is something of a signature on the Boardmans. Also, it has to be said that while the AiR's chainstays are relatively short at 405mm, the S3's are shorter still at 390mm. By comparison, those on a Madone 6.9SSL are 410mm.

Not that Boardman really need to take a leaf out of anybody else's book here anyway. They have their own R&D depatment and in Chris Boardman they've got someone whose involvement with aero bikes goes back to Mike Burrows and that Olympic gold-winning Lotus and on through his later career as British Cycling's version of Q. Our guess is that Boardman are trying to combine the benefits of a quick, stable road bike with maximum aero slipperiness. We look forward to throwing a leg over one to see how well they've succeeded. 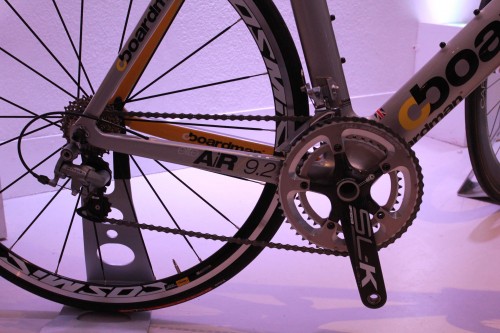 Given that we don't think there is a frame-only option available, I'd be pretty tempted by the 9.2. You get the same frame and fork as the 9.8 and 9.4, it comes with a mainly Shimano Ultegra drivetrain and controls with the addition of an FSA SLK BB30 chainset, and looks to be a nailed-on bargain that also gives you plenty of upgrade options...Although there is another option on that score, the Pro Carbon – top bike in the performance range – which is also built around an AiR frameset with Ultegra but Mavic Equipe wheels and an FSA Energy chainset for £1,799.99. Let's call it £1,800.

The 9.4 is pretty much the same mix as the 9.2 but with those cBoardman deep section wheels and Shimano Dura Ace instead of Ultegra. Interestingly, the 9.8 is decked out with SRAM Red rather than Shimano. We're not sure if this is to do with the sponsorship needs of the athletes that use the 9.8 or the need to keep the price of the overall package from going completely off the deep end. Boardman makes no secret of the fact that he is a fan of SRAM's top gruppo either. 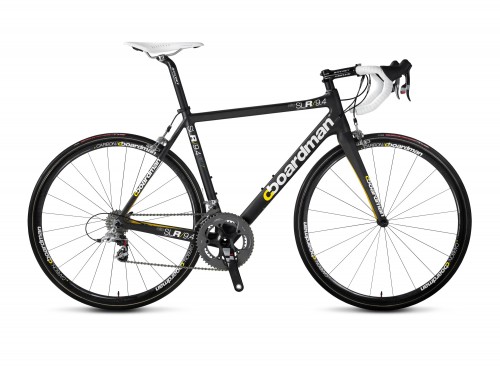 Boardman's SLR (Superlight Racing) frames are designed with "mountain passes and the hardest single day road races in mind". They are also designed to weigh less than the UCI weight limit – the SLR 9.8 has a claimed weight of a a feathery 14.2lb, with the 9.4 weighing in at 14.6lb and the 9.2 at 15.7lb. At the launch a straight from the box SLR 9.4 weighed 6.4kg. The difference between the two top models is all in the wheels because that seems to be the only spec difference between them. The 9.8 runs on Zipp 202s while the 9.4 runs cBoardman Carbon SLRs. 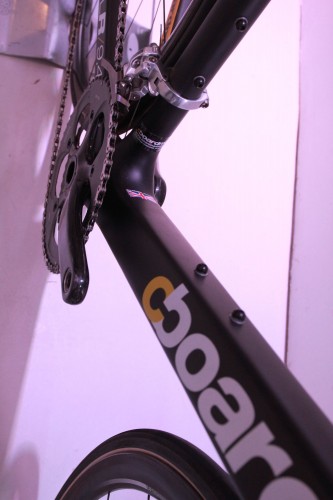 In many ways the SLRs are not that different from their AiR siblings. Both are designed to be all round race bikes, one with an emphasis on aero performance and  the other on low weight. The handling characteristics and applications, though, are not designed to be massively different.

To my mind, the SLR looks to be a pared down version of the AiR. The geometry is the same, as is the method of constuction - Boardman have used finite element analysis to remove any excess material and tune the tube profiles for their intended use. Crucially, though, where there is a potential benefit across the range that benefit is applied, so the SLR has the same chainstays as the AiR and the non tapering to the rear dropout features prominently on a number of bikes. 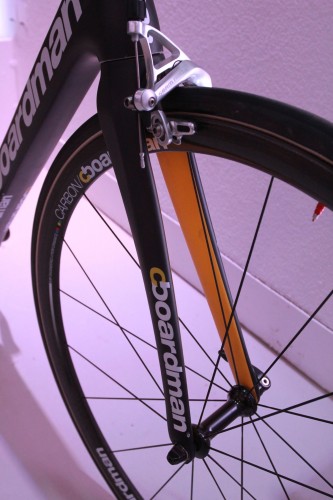 One particular feature of the SLRs that we liked was the fact that although these bikes are light, with all frames a claimed sub 900g, they are also designed to be ridden by anybody - so there are no rider weight limits. 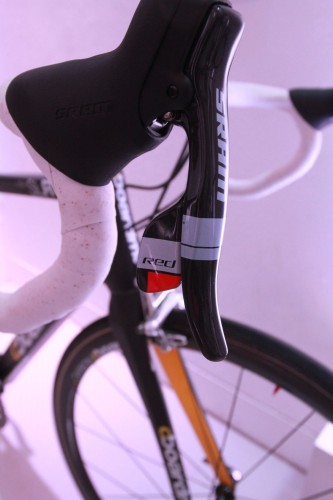 As with the AiRs, there are four frame sizes: S,M, L & XL. Prices on the 9.8SLR haven't been announced but the tbc price on the 9.4 is £3,299.99 and that gets you a full SRAM Red drivetrain and controls, those Boardman SLR wheels, and like the AiR Vittoria Corsa CX tyres – good to see decent tyres on a bike as original equipment too. The 9.2 sports SRAM Force instead of Red and swaps the CBoardman SLRs for Mavic Ksyriium Elite wheels and can be yours for £2,499.99.