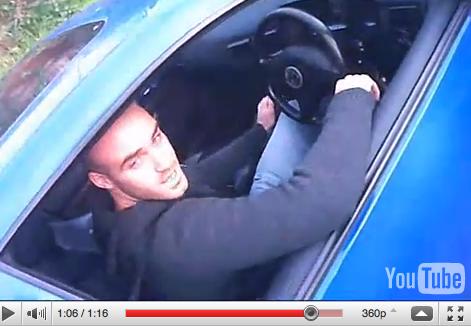 Driver who threatened to kill cycling lawyer puts case to road.cc, but is it the truth? (+ video)

Read his comment, watch the video, then make your own mind up
by Simon_MacMichael

You may how we reported last November the frustration experienced by barrister Martin Porter QC, who blogs under the name The Cycling Silk, following the refusal of the Metropolitan Police and Crown Prosecution Service to prosecute a driver who had threatened to kill him, despite having video evidence of the incident.

The story attracted many comments at the time it was published, then the comment thread fell silent until the last day of February when, in a first for road.cc, the driver concerned stepped forward to give his version of events, under the user name innocent_and_proven_so _by_police.

We’ve reproduced his comment below at the end of this article, and in the meantime we heard from Martin, who told us: “"I see that the motorist who threatened to kill me back in November has posted on your site.

"I can be fairly certain it is him as a part of the account is consistent with information that has been given to the police and is not widely available.

"He obviously does not appreciate that I have filmed our entire encounter, viewable here from which it is clear enough that he is not being truthful."

We’d like to invite you to read the driver’s comment first, then watch the unedited version of the video that follows and make your own mind up about who is telling the truth.

“Hello everybody, i am the man in the car who 'threatened to kill' Mr Porter. Right, first off, the car is not mine, so the person now driving it has nothing to do with this incident. Ok, if you watch the video from the begining, you see that Mr Porter moves into the middle of the lane on the road, in doing so he pulled out in front of me when i was doing a touch over 30, the speed limit. If i hadn't of reacted as i did, i would of knocked him off his bike and probably killed him. I was going to overtake him because a traffic island was approaching and i didn't want to make it dangerously tight, i did nothing wrong, i didn't boot it, i was just going to cruise past him. As i did so, he pulled out like you see. The first time i pulled along side him, i was saying ''you can give it all the arm signals and tell me i'm wrong, but i'm driving a car and you're on a push bike, if i had hit you, you definately would of come off and i would of killed you''. Then Mr Porter conveniently edits his video, cutting out another mile or so of the journey in which he passes me twice at traffic lights, on the first occasion calling me a 'w**ker', the second a 'dangerous chav'. Totally uncalled for as i was trying to forget about the incident and was just minding my own business at the junction. As the footage continues, he had been in front of me for a good half mile, in rush hour traffic, doing 15 mph when the limit is 30, steering in front of me, tempting fate. if i had of been such a thug, i would of knocked him down there and then, becuase he was doing what he shouldn't be doing. who rides infront of moving cars? the oncoming traffic cleared so i then had a chance to go past him, at which point i said ''mate, you're taking the piss now, you're driving like a c**t and if you keep riding like that, someone's going to kill you''. yes ok i swore, but who wouldn't be right now when you've nearly hit a cyclist twice due to his reckless riding? At the lights at the end of the clip, yes i did 'admit' to 'threatening to kill' him, but just to shut the guy up, he was a total idiot and i NEVER threatened to kill him. People need to ask, why would i be tooting or swearing? It wouldn't be for no reason would it? I was provoked! Also, when i turn left, i have no need to indicate as it's a left only lane. i have NEVER had any issuse with cyclists and is it any wonder this guy has a camera attached to his head? or that he has had so many bad experiences? maybe it's a case of him delibaretly pushing the boundaries and getting peoples backs up? because nobody i know who rides to and from work on the same route has ever had any issue with any driver. the guy is a moron and should stop trying to provoke drivers and then record their reactions. Yes, there are many idiots on the road, dangerous drivers who cause many problems, but, i am not one of them and this guy is clearly a car driver hater who was trying to get me in trouble with the law when he was equally if not more so at fault than me.”