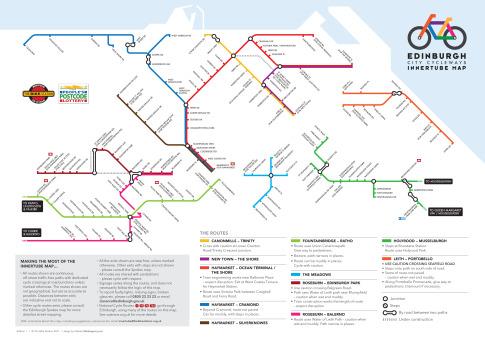 The Bike Station, a Scottish cycling and recycling charity, has developed a map detailing a hitherto little-known traffic-free cycling and walking transport network in Edinburgh that runs parallel to the city’s roads.

Dubbed the Inner Tube, the network includes disused rail lines and canal towpaths which allow Edinburgh’s citizens to get around the Scottish capital quickly and efficiently. Given that there are an estimated 150,000 bikes in the city, the map should meet a pent-up demand especially as in recent years commuters have endured congestion caused by the creation of a tram network.

Mapping the network, however, is only the start of a longer term project which will eventually ensure the routes are fully signed and even, it is hoped, see additional access points where steps are replaced by bike-friendly ramps.

At present in some parts of the network there are issues with fly-tipping and overgrowing vegetation but the plan is for volunteers from the local and cycling communities and the Edinburgh & Lothians Greenspace Trust to assist in maintaining and developing the facility.

So-called “ambassadors” for the network will in future be able to photograph parts of the route and upload geo-tagged images to the internet both to create interest in the project and to allow any problems areas to be identified and dealt with.

Mark Sydenham, the Bike Station manager, said. “We want to create a virtuous circle whereby more people use the network and it subsequently gets more attention and additional resources from the City Council.”

“We are lucky here in Edinburgh to have this network and much of it is in perfect condition so while other cities are trying to develop a cycle infrastructure we already have one.

“But most people in Edinburgh are simply unaware not only that this network exists but that it exists as a means of transport to get around the city. We are very fortunate that these old railway lines were not simply turned into roads which is what happened elsewhere.”

To develop the map further, the Bike Station and Edinburgh and Lothian Greenspace Trust have been awarded over £98,000 funding from the People's Postcode Lottery's Dream Fund.

The next stage of the project will begin in April and offer opportunities for those interested in conservation to get involved in maintaining and developing the Inner Tube network.. To sign up for updates, follow the Twitter streams from @theBikeStation @InnertubeMap @greenspacetrust