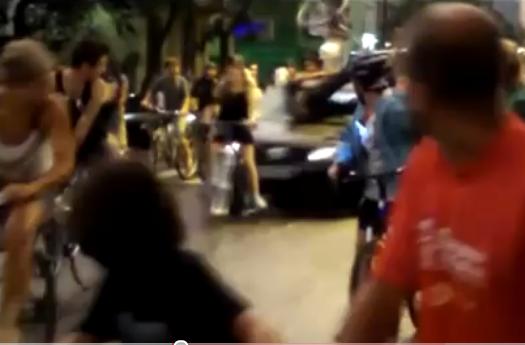 Video footage has captured the moments a peaceful critical mass ride in the city of Porto Alegre in south eastern Brazil on Friday evening turned into something much nastier when a motorist accelerated through a group of 130 riders, hitting 20 of them and putting 9 in hospital. The footage is not for the faint hearted.

Incredibly despite the shocking nature of the scenes captured in both films local media reports say that all of the injured cyclists were discharged from hospital after treatment.

Two films of the incident show a relaxed and peaceful Critical Mass ride suddenly turn in to something much more sinister and frightening when a black VW Golf, which according to some witnesses had been follow the ride for some time suddenly accelerates through the middle of the group of over 100 riders with predictably horrible results. The shorter video above contains subtitles and witness accounts, the longer film at the end of this piece is unsubtitled - predictably both films have attracted some hateful comments on Youtube.

Although police found the badly damaged car on Friday night they have not yet been able to locate it's driver thought to be the 47-year old owner of the vehicle, Ricardo José Neis. While local cyclists have called for the driver to be charged with attempted murder, according to Porto Alegre's Police Chief, Gilberto Montenegro it is not yet possible to say if the driver intended to run over the cyclists, maybe he hasn't seen the videos. However, Chief Montenegro has said that If intent is proven the driver may wel face a charge of attempted murder.

One cyclist who was on the ride Camilo Colling, told the Brazilian website Terra Brasil that he spoke to the driver just before the incident, asking him to be patient and stop behaving aggressively towards the riders in his path and warning him that there were children and older people taking part in the ride ahead. The driver allegedly replied "Yes but I'm in a hurry" before ploughing his car in to the group of cyclists in front of him.

The authorities recovered the car shortly after the incident and identified its owner, but Neif has so far proved more elusive having reportedly gone in to hiding. According to local reports a lawyer claiming to be acting for the driver has contacted police telling them that is client will surrender voluntarily on Monday – there has been no indication as yet whether that man will prove to be Ricardo Neis.

What offence he will be charged with remains to be seen, but many of those who were the victims of his actions or who witnessed them will not it seems be satisfied with anything less than attempted murder a possibility that has not been ruled out.

You can read a blog posting by one of the Porto Alegre Critical Mass riders here - click 'translate' for an English language version. You can also find more reports on the Urban Country blog.