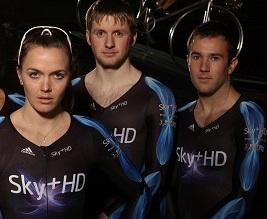 We all need our heroes and it seems the success of the British Olympic cycling squad has provided the image boost needed to inspire ordinary people to get on their bikes.

With sprint specialist Victoria Pendleton appearing in the pages of style bible Vogue and a forthcoming issue of FHM, and Sir Chris Hoy, winner of three golds at Beijing, in great demand from sponsors, cycling is much more likely to become the mainstream activity Cycling England thinks it should be.

According to an article in The Times, numbers of regular cylists has risen by a massive 40 per cent since 2005 when the British squad broke through as the dominant force in world cycling. 1.8 million of us now cycle regularly, while those cycling at least once a month has risen by 334,000 to more than 3.5 million.

Cycle sales have been growing by five per cent a year, reaching 3.8 million annually leading to a rush on orders for bike manufacturers like classic brand Pashley. The firm’s 1930s style Guvnor model, which costs £778 with its curved handlebars and leather handgrips, combined with other elements like the craze for fixed gear bikes, is helping fuel the trend of cycling for pleasure.

As the Great Britain squad fly to Poland today for the World Championships, there’s no doubt many road.cc users will be among those enjoying the sunshine from the comfort of their saddles. The raft of recent Government initiatives promoting cycling have certainly helped, but a healthy dose of hero worship may have tipped the balance.

Phillip Darnton, of Cycling England, said: “We used to say, if only we could find cycling's Jamie Oliver or get David Beckham on a bike. But people would see through that. Then along comes this team of people who everyone sees on television and they make cycling fashionable overnight.

“They are really inspiring kids, who go to after-school clubs and get on their bikes, as well as adults who now see cycling as fashionable. ”

Sir Chris, who will miss the world championships because he is recovering from injury, said: “It is amazing to think that we can inspire a generation. If dads see what is happening on the track and then dust off their old bike and start riding again, then it is fantastic for us and for the country.”