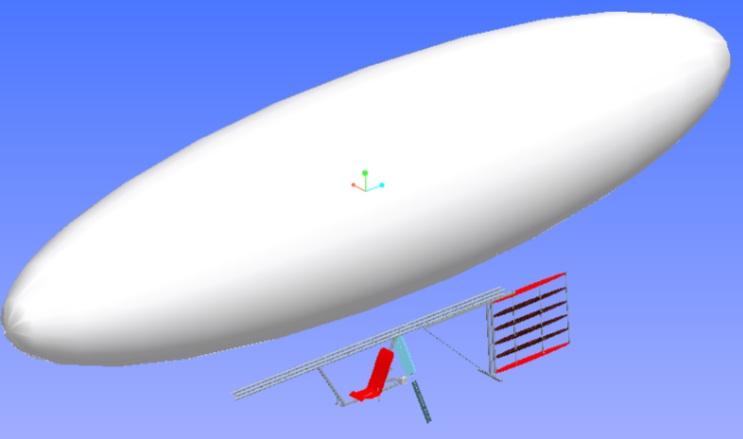 A pedal-powered airship will have a Giant bike frame at the heart of its design when it takes to the skies above Nottingham later this year.

The helium-filled blimp, designed and built by students at Nottingham University, is partly inspired by the craft used by Stephane Rousson in his (unsuccessful) attempt to cross the Channel last year.

The mechanical engineering students at Nottingham University selected the airship challenge as their 4th year project after it was set down by supervisor Dr Janet Folkes, a balloonist who holds more than 40 world records in the sport.

Giant is providing a bottom bracket section to form part of the drive train and Lindstrand Technologies® is providing production facilities and support to fabricate the 25m long helium-filled envelope. The pilot will sit in an aluminium A-frame and pedal to power the propeller and rudder, which controls horizontal motion.

The students’ aircraft will look like the White Dwarf, an airship built for US comedian Leo Gallagher in the 1980s, but is also inspired by the craft flown by Rousson, who they have been lucky enough to consult during the design process.

Team member Pete Sharman, taking a few minutes out from the workshop where the propeller is being manufactured, told road.cc: “Janet knows Stephane so we’ve been in contact with him to get a few pointers, but he’s quite a busy guy so we’re trying not to take liberties.”

The vital difference between the Nottingham University craft and Rousson’s will be the ability to achieve vertical and horizontal vectoring of the propeller, allowing forward and upward propulsion when the pilot pushes the pedals.

The team hopes to achieve a maiden voyage at the end of April. Sharman says: "The ideal product validation is a low altitude, tethered flight test over the university park lake, following the satifactory completion of all necessary safety tests and Nottingham City Council permission.

Like Rousson’s helium-filled blimp, which started its attempt to cross the channel in calm conditions but was scuppered at the half way point when the wind picked up, the Nottingham University blimp will need calm conditions to fly.

Sharman and Tim Hendrikz may have a slight advantage over team-mates Sam Arnold and Mike Leonard as they are the cycling enthusiasts of the bunch, but the prototype will not be required to perform any major acts of endurance.

The students’ prototype is intended not for cross-channel travel but to be used at university open days to promote The School of Mechanical, Materials & Manufacturing Engineering.