Your bike won't roll without 'em... here's a wheels catchup from CORE
by dave atkinson

Shiny things that go round so's your bike can move along? there were plenty of them in evidence at the CORE Bike show, as you might expect. Here's a quick round-up of some of the hoops we saw on our trawl round the show last week... Easton are another company that are throwing their weight behind Carbon clinchers; we're seeing more and more at every trade show. They also claim to have done a great deal of work on the heat dissipation within the rim surface to guard against excessive heat build-up and possible failure. Now I don't know about you, but here at road.cc we haven't seen much evidence of any wholesale failure of earlier Carbon clincher rims, but the issue seems to be one that's firmly embedded in the consciousness of the cycling fraternity; we're guessing Easton and others are just trying to put everyone's mind at ease. And it's nice to know they have our best interests at heart.

Easton's big-money new wheel was the EC90 Aero clincher. Last year the company had an 38mm SL clincher but now the top-end hoop is available in a 56mm deep section too. The wheel carries Easton's new Thermotec braking surface that we first saw last year; it has been tested to temperatures far in excess of what you could generate on an alpine descent on a hot day, so no worries there. Deeper sections seem to be more and more commonplace; we were commenting at the show that a few years back we were referring to 30mm or 35mm rims as 'semi-deep', whereas now that term seems to be reserved for the 40-60mm bracket. The new wheelset weighs in at a stated 1670g, which isn't shabby at all for a clincher rim that deep.

One thing that's happening more and more is that wheels aren't being sold in pairs, but as separates, with standardised graphics across a range. This makes a whole lot of sense, and there's been plenty of mixing and matching in the peloton for years, with riders speccing a deeper rear and shallower front to get a bigger sail effect in crosswinds without sacrificing handling at the front. Easton are one of the companies who have switched over wholesale to single wheels. With the EC-series wheels you can have anything up to a 90mm rim, though currently that's only available as a tubular.

Further down the range there was another new wheel, the EA50 Aero, which we reckon we'll be seeing as OEM spec on plenty of bikes next year as it ticks a lot of boxes: good looks, reasonable weight, low cost. The 30mm rim is laced to an anodised red hub housing oversized cartridge bearings, and the EA50 Aeros use bladed steel spokes for extra slipperyness. Stated weight is a very reasonable 1780g, considering they cost just over £300 a pair. 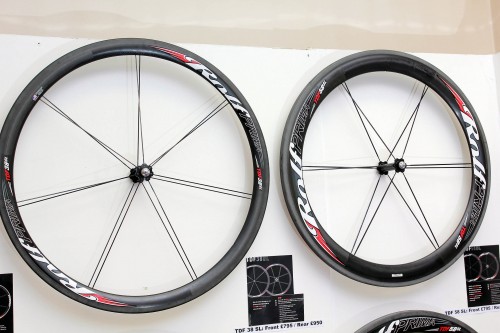 There's no changes on the Aluminium range of the Rolf Prima wheels, save for the fact that you can get the excellent P-Town singlespeed wheelset with a White Industries ENO hub these days to allow easy chain tensioning on any frame. The ENO is also available in a singlespeed CX wheel, and the good value Vigor wheels now come in a polished silver finish which will look pretty special on that classic build you're doing.

On the Carbon front it's the same story as at Easton: pairs are out, singles are in. The range is essentially the same as before, but there's now an SL version of each wheelset that uses a lighter gauge spoke in order to shave a bit of weight. Unlike some of the other super-light wheels we've seen that have weight limits of anything as low as 70kg, the Rolf Primas max out at a respectable 96kg, which is good news for anyone who's lighter than Dave.

Rims go right up to 85mm for the TT85, which amazingly only uses ten spokes. Jeremy from Chocolate got one down for us to lean on with our considerable weight; even with so few spokes the wheels are mighty stiff. There's a 12-spoke version too if you're off to any UCI-sanctioned events. And if you want to make a big impression at your local evening ten, Rolf's sub-900g rear disc wheel is a snip this year at just £1,200...

Final Rolf Prima news: the stickers are red this year, not yellow. So if you've got some old Rolf Prima wheels everyone will know, and you'll need to chuck them and buy some new ones... Reynolds are launching the 'Spin it up' test programme through a network of dealers across the country this year, so you'll be able to have a go on their hoops before you make a commitment to buy. They were still signing up the dealers when we spoke to them but we'll let you know the definitive list when we have it.

The Strike, Assault and Attack wheelsets have had a freshen up, and Reynolds have done some work on the brake tracks to help with heat dissipation. this boils down to a change of resin and a slightly different top layer, but Reynolds are confident that the Alpine descents, which seem to now be the standard measure of Carbon clincher braking efficiency, will be no problem at all.

The 32mm, 46mm and 66mm race wheels have been rebranded in a say-what-you-see excercise; they're now the Thirty-Two, Forty-Six and Sixty-Six. See if you can guess which is which. The other major innovation is that the three wheels have take on the Swirl Lip generator technology that was developed for the money-no-object RZR wheelset. The Swirl Lip Generator is a ridge that runs around the inside of the rim, and its purpose is to tidy up the airflow at that point to reduce drag on the wheel. Apparently it works in a similar way to the diffuser on the back of an F1 car. So now you know. The range still use DT190 hubs, this year you get an anodised freehub body that you can admire until you slap your oily cassette on it. 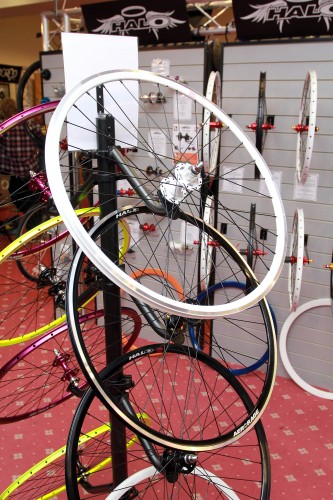 All Halo's singlespeed/fixed wheels now feature their Fix-G splines, which is a short section of Shimano-HG-compatible spline that allows you to fit any HG sprocket, and the spacers supplied let you tweak your chainline so it's just so. Or even run two cogs. It's a great idea and we reckon it'll catch on big time: no one really likes screw-on sprockets, do they? 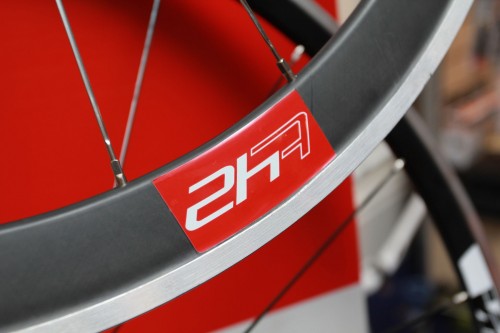 FSA have started to manufacture their own wheels in house, which should mean that they can offer lighter wheelsets for the same money now they're not outsourcing them. The process they're using for their rims looks to be similar to the one that Shimano use for their Carbon/Aluminium units, with a layer of structural Carbon over an Aluminium base. First up there's a 42mm section wheel, branded as Vision to tie it into FSA's time trialling line-up. FSA tell us that the wheelset weight in at 1.7kg which isn't shabby at all for a 42mm rim, and they're built up with FSA's rims which house oversized bearings for a smooth ride. The spokes are Sapim and there's a 2 year warranty on the build. There's also a 24mm section wheelset that uses the same technology; the narrow rim brings the weight down to a claimed 1.4kg. Either wheelset will set you back £699.

FSA's SL-K components have always been dependable high-end kit, and through February and March they're running an offer to get 30% off the whole range of components, which means you could pick up the £430 Carbon SL-K chainset for just £300. You have to download a voucher and take it to your dealer and you can do that right here on road.cc... The good news from distributor Paligap was that they'll be bringing in the full range of Ritchey wheels for 2011. They didn't have the full range at CORE, and they were tucked away in a corner so we didn't get a great look at them, although we did look enough to see that the Apex and the Zeta, the two models on display, didn't feature the crow's foot lacing that we saw on some of the Ritchey wheels at Eurobike - Ritchey claim that the spoke pattern means a more even tension. They've also moved the offside flange in on the rear which sounds counter-intuitive, but Ritchey claim that the more even tension between the sides means a stronger wheel, even though there's less triangulation. 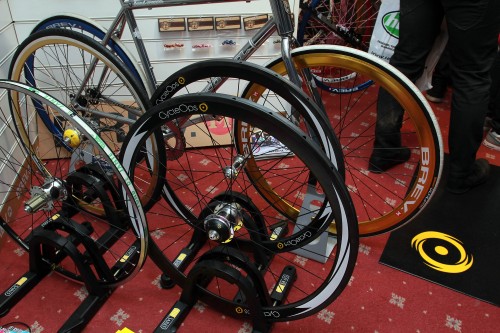 Powertap hubs have been popular in cycling statto circles for many years now, but they've never been available as a full wheelset from makers CycleOps. Until now, that is: now you can have your Powertap built into some nice-looking semi-deep Carbon tubular hubs with a matching alloy and Carbon front hub. The rental scheme will be continuing; you can get rental wheels to play with for a wheel or two to mess around with your data and decide whether the analytics route is for you. 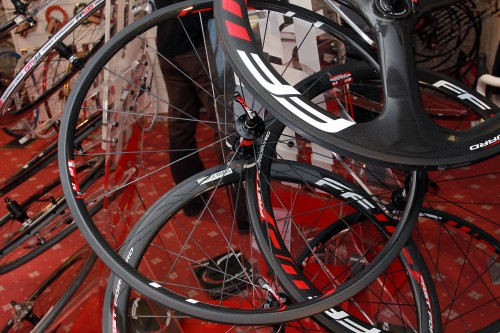 The big news at FFWD was that the F2R wheelset, that we tested in tubular guise, is now available as clincher too. We don't have a weight for it at present but seeing as the tub wheels only just nudged over a kilo we'd expect the F2R clincher to be a majorly light wheelset. Stay tuned on that front. There are three hub options as before, two DT Swiss units and FFWD's own.