Lots of Carbon, and a sub-750g wheelset from AX Lightness
by dave atkinson

Wheels: you can't move for them at Eurobike, either attached to the thousands of bikes or spinning happily on stands of their own. Walking round the show you stumble upon countless makes you've never heard of and will never see, alongside all the UK standards. The main trend this year is for Carbon: there's much more of it, and in clincher rims as well as tubs.

In 2009 there were plenty of Carbon wheels but you saw the same rims time after time, stickered up to suit. This year it's a much more diverse range, with many smaller manufacturers weighing in with their own rims and hubs rather than sourcing them from elsewhere. Technology-wise it's mostly incremental changes, with Carbon technology improving a bit and Carbon clinchers becoming much more widespread.

Tubeless still isn't big news though. Hucthinson had their range of road tubeless tyres on show but for the most part it's normal clinchers or tubs for 2011. We asked a few of the bigger manufacturers why they weren't pushing it and it seems to be a bit of a supply/demand thing – people aren't asking for tubeless so the wheel makers aren't pushing it – and partly worries about the ease of use of tubeless systems out on the road. Anyhow, most of the major brands have tubeless-ready wheelsets but there's still a dearth of tyres out there.

Mavic had a whole bunch of new stuff to talk about. The wheel range is broadly the same as last year but there's a few new models and a lot of new technology to talk about. First up: Exalith. 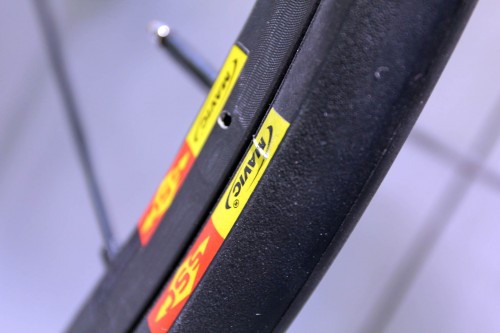 Exalith? it's a new kind of rim treatment that Mavic have developed, and they claim that it reduces rim wear to zero. In effect it's a hard anodisation process that makes the braking surface super hard. Because this reduces the amount of friction, Mavic have added a very fine ribbed profile to the braking surface to improve things. Mavic are persisting with Aluminium braking surfaces even at the high end with the exception of the Cosmic Carbone Ultimate, and they're also continuing to develop their tyre/wheel systems where the tyres are matched to the dynamics of the wheel for optimum performance. Obviously you can swap out Mavic's tyres for your favourites if you want to.

The R-SYS got a lot of bad press last year and Mavic recalled and redesigned it, but they're confident that it's still a winner, and they told us that in intrusion tests (where they stick an iron bar into the rotating wheel) it's the strongest and safest wheel they've ever made. There's an SLR version with the Exalith technology, and SLR builds of the Cosmic Carbone and Ksyrium too. There's a Ksyrium SR too, which uses the Tracomp spoke technology from the R-SYS in the rear wheel and more standard spoking to the fore. The Cosmic Carbone now comes in a 80mm deep section too, with steel bladed spokes instead of Carbon ones for a better ride quality on the super-stiff rim. 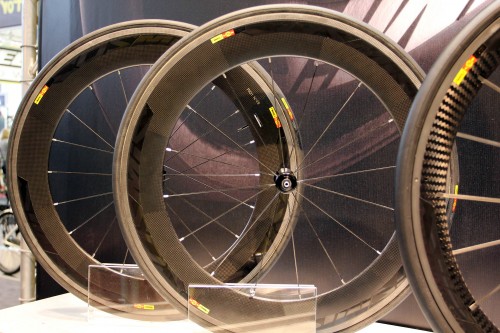 Reynolds' RZR wheel got a big thumbs up from road.cc tester Mat this year with the scary light wheelset giving great performance, provided you didn't think too much about the fact you could have a whole Di2-equipped bike for the same kind of money if you shopped around a bit. Anyhow they're persevering with the RZR, and they've also introduced a version with a bit more material in it to cater for... well, rich types who are a bit over race weight, we're guessing. The Clydesdale RZR (that's not its real name) will weigh in at about 1050g and has beefier spokes and Kevlar-reinforced sidewalls. 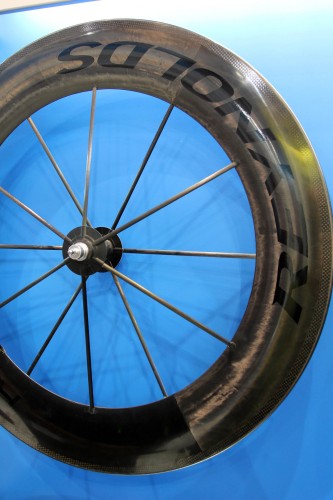 There's a new kid on the block too: the deep section RZR 92.2, which at the moment is just available as a front wheel to marry up with Reynolds' disc wheel. It uses the same spoke technology as the 46mm version but the wider 25mm rim and deep section combine to create a classic aerofoil shape. The 92.2 refers to the depth, of course, which is the optimum for aerodynamics given the width. We're not sure how much difference that extra 0.2mm will make, but every second counts, eh?

Further down the range the wheels are benefiting from the technological advances pioneered with the RZR, with the drag-reducing Swirl Lip Generator added to the mid-range wheels. Reynolds are also using a different lay-up and a more temperature-stable resin, meaning the Carbon clincher rims are now rated to 160psi and can cope much better with braking heat. The new construction is used on all the Carbon wheelsets. You can mix up the wheels this year too, with Reynolds supplying a number of wheelsets as mixed sets with a deeper rear. 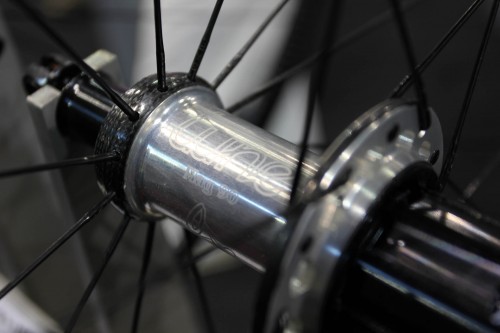 Reynolds may have a web domain to add to their claim that they're knocking out the world's lightest production wheels but it's looking like a pretty empty claim once you've taken a wander over to the AX Lightness stand. Their Ultimate 24 wheelset has a claimed weight of less than 750 grams. Yep, you heard that right: 750 grams. They're an impossibly skeletal set of hoops, mating a super-thin tubular GP24 rim with a hub that looks like it would float away if the spindly Sapim Superspokes weren't tying it down. Needless to say the weight limit ruled out half the road.cc crew at a stroke, but if going uphill fast is your thing these were the lightest wheels we saw at the show, and probably the lightest we've ever seen. AX Lightness weren't giving us a UK price but you know the score: if you have to ask...

That wasn't it from AX Lightness, either. There's a premium version of the 24mm wheelset too, that uses a different hub and rim combination and can accommodate riders up to 80kg, but still only weighs 850g for a set. The 42mm rim Premium Road will take a 90-kilo rider and still sneak under the kilo, and even the semi-deep 69mm versions weigh in at less than many Carbon climbing wheelsets at just 1160g. 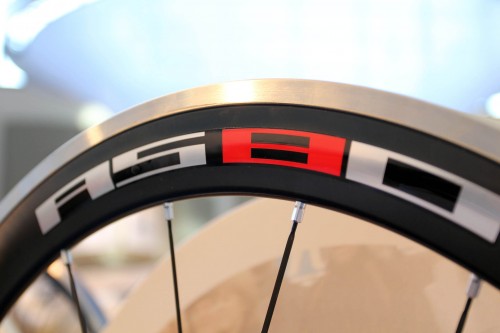 Shimano had their full range on show, all of which we've seen and reported on before, except the RS80 C50 mid-section wheel, which we've been eagerly awaiting a peek at in the flesh. Luckily the samples arrived just before the show so we got our first look at Eurobike, and a very nice looking wheel it is too with a Carbon/Aluminium rim and Ultegra-level hubs. The rest of the range - some of which we reported on at the product launch in February - stays the same.

Fulcrum haven't been up to that much really, with most of the talk on the stand about where the rims have been milled, or what colour the hubs are this year. They are introducing a new rim that features crimped sections instead of eyelets to reduce weight, and they've started milling on the agled sections of the sidewalls too to drop a few more grams, but there's nothing completely new. 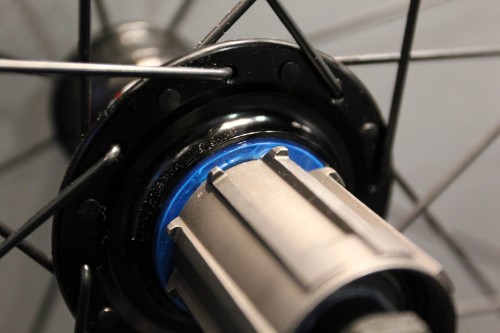 What they have done has been to produce a CX version of both their Racing 5 and Racing 7 wheelsets. They use the same rims and spokes as the road-going versions, but the hubs have additional seals to keep the 'cross crud out of the workings. Campg wheels are pretty much the same as Fulcrum – bar the names and the spoke lacing – following the trend from last year's show which was the first that the two companies effectively shared a range.

Control Tech were showing off their new Auster wheelset. They're starting off with a 38mm Carbon tubular which was the wheel they had on display. Control tech have made their own hub, which has a swappable freehub for Shimano/SRAM or Campag, and they're laced to the unidirectional Carbon rims with Sapim CX-Ray spokes. They're pretty light at 1,230g a set. 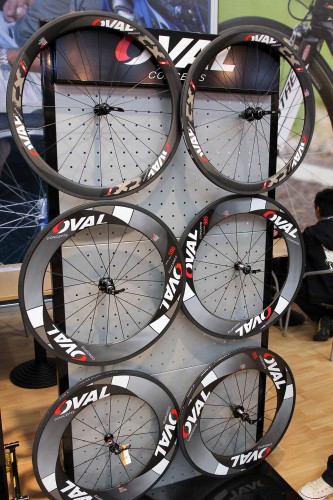 Oval are well known for their control components but they've now got a full set of wheels too; they're not in the UK at the moment but you can expect to see them next year. They've been developed in-house and they're making four depths – 35mm, 50mm, 85mm and 105mm – and most of the rims are carbon clinchers although there'll also be making a Alu/Carbon mix of the shallow rim, and there's a CX-friendly tubular version of the 50mm.

The rims use uindirectional Carbon with extra 3K woven layers in the spoke bed to increase the strength of the rim to allow high tension in the Sapim spokes. The rim is a bit wider, at 22mm, than a standard rim which Oval reckon makes for a better ride from a standard 23mm tyre. Oval's hub has a 6-pawl freehub with 12 engagement points for quick take-up. The Geox professional cycling team will be using the wheels for 2011, so you'll likely see them tackling the Tour de France climbs next year. 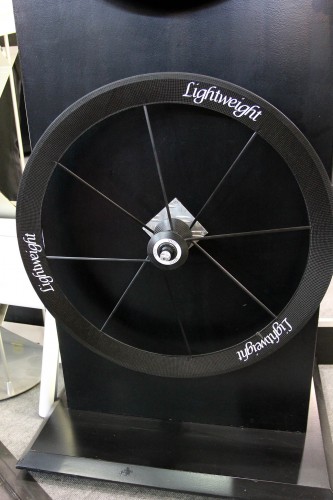 How many spokes does a wheel need? Eight, according to Lightweight, who were showing off their new VR8 wheel. There's so little material holding the rim onto the hub that it looks half-finished, but it's all good according to the German Carbon magicians. The VR8 was on a few how-low-can-you-go bikes about the show, including the stealthy TT bike on the Lightweight stand. 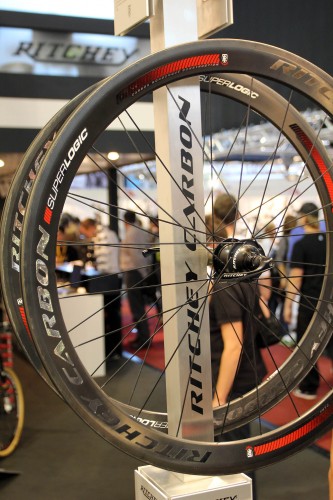 Ritchey had a full set of wheels on show this year, though we're not sure how many of them we'll see in the UK. They range from training wheels to the money-no-object Carbon Superlogic clinchers, which looked very tasty. One interesting feature of the Ritchey wheels is that they use a crow's foot lacing over nearly all of the range, which Ritchey say allows them to get better tension into the wheel. They're also continuing to use OCR rims to reduce wheel dish on the rear, and they've moved the left flange in a bit on their hubs to reduce it even further; they say that the gains made by more even tension more than offset the losses from less triangulation. 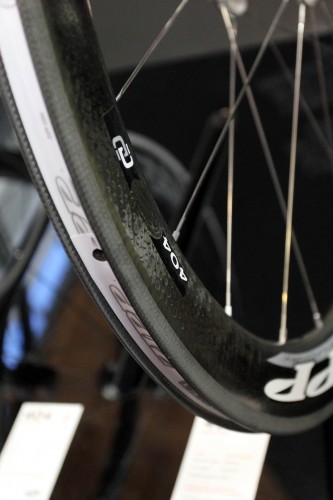 Zipp had their full range on show too, including the long awaited – and still not available – 101, we're told the delay was down to the fact the original rim design was too stiff when they tested it with their crew, so it was back to the drawing board to make it a bit more responsive. Anyway they'll be with us soon. The 404 clincher is another one we're hoping to get a test ride of real soon. The Zipp wheels are all moving – one by one – to a more bulbous profile that has the widest section just below the braking surface. It doesn't look as aero but Zipp assured us that in real-life situations – where wind comes from the side and the wheel section has to slice the air in both directions at either side of the wheel – it's much more efficient. The gains are such that the new 404 performs better than the much deeper 808 in the old profile.