We're not done yet with our CORE Bike roundup - there was loads to see as usual, and lots of people to talk to. Here's the latest tranche, including some belt drive bikes, expensive bags, retro saddles, paper-thin Carbon, honey-based goodness and well-thought-out fixie stuff... 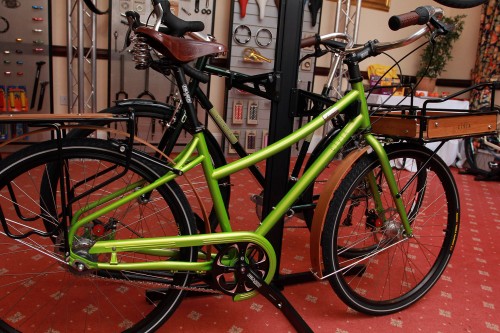 QBP (Quality Bike Products) are the largest bike distributor in the US and they're the people that bring you Salsa, Surly and All City... and Civia. We saw our first Civia at the London Bike show but CORE gave us an opportunity to have a look at a bit more of the range. The brand is three years old and for 2011 there'll be four bikes, all steel framed, available in the UK. Civia targets the well heeled and stylish commuter, and there's an emphasis on practicality with style. Gates belt drives are very much in evidence – two of the four bikes, the Bryant and the Kingfield, feature a belt – and the Civia frames have a replaceable dropout that serves to split the frame for the belt but can also be replaced with a standard derailleur hanger if you decide to swap to a chain. The Loring cargo bike was turning a lot of heads at the show, with its electric green paintjob, front beer box and bamboo guards. It runs a three speed SRAM hub gear and you get Brooks leather contact points. It'll set you back £1,200. The Nexus-geared Kingfield is also £1,200 with the Alfine-equipped Bryant more expensive at £1,500, and the derailleur-geared Prospect that we saw in London is a Cyclescheme-friendly £1,000. The bikes are due to land in March so expect to see them in the shops by early Summer. 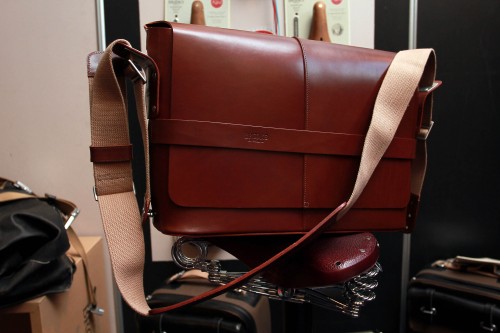 Brooks are expanding their range of bags too. Top of the pile in terms of classiness and eye-watering price tag is the hard leather Barbican shoulder bag, which is a thing of beauty but certainly not cheap at £324. It's a bag for life in the very truest sense, and it'll soften and take on a lovely patina over time, we're sure. It'll probably take longer to break in than a saddle. There's a slimline version too, the Soho (£239), which is more slender and well suited to ladies' shoulder bag or metro gentleman's duties. 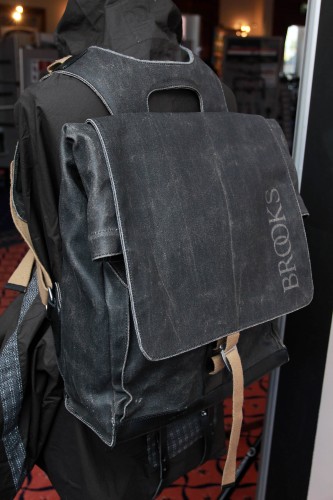 There was also a new rucksack, the Islington, made from the waxed cotton fabric that the Barbican bag originally came in. It features a roll-top closure and you can set the straps up crossed as a sort of harness for extra stability on the bike. £249 will secure you one of those. Brooks have being doing well with their plump grips made up from donut-shaped rings of leather held together on a locking grip base, but they've had some comments that the grips are just too wide for smaller hands. The solution is a slender grip, which uses Brooks' own leather bar tape and makes for a much more, well, slender grip. The clue's in the name. They'll set you back £54 with the plump grips costing £49 Hooray for trickle down, we say. The big news for Merida on the road side is the new Reacto 909 frame, which replaces the Scultura Evo as the top dog. It uses the twin chamber Carbon technology that Merida have been using on their top-end Carbon MTBs for a while now; basically there's a strut inside the down tube and the top tube (as well as the fork blades) which add rigidity to the structure and allow the use of super-thin walls; Merida had a cut-through of the down tube of their high-end MTB frame and the Carbon really is paper-thin. 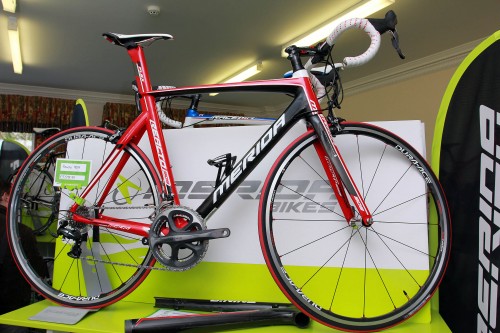 The Reacto 909 is a more aero-looking machine than the Scultura and although it looks a lot chunkier it's lighter than last year's top frame. There's still plenty of life left in the Scultura though, and the happy news for us is that you can now have what was Merida's pro-level frame in a 105 build for just £1,800 – about the same as what the frame used to cost on its own. We tested the Scultura in its top dollar £4k build with SRAM Red, and liked it a lot; to think you can have the same frame with the excellent new 105 groupset for less than half that... well, we're tempted.

Merida have split all the bikes lower in the range into two geometries: race and ride. Predictably the Ride geometry is a bit higher at the front and a touch shorter, with shallower drops, narrower seatpost, compact chainsets and wider tyres. The lower-priced bikes get Ride geometry and the Carbon bikes are obviously Race; in between – at the £1,400 level – you have a choice of the two. There's women's bikes (with Ride geometry) from £565. We've seen plenty of old saddle moulds rescued from dusty corners over the past few years; the Concor is back, as is the Turbo. I bet you never thought you'd see the Aeroyal again though. But it's back, fashioned from the same mould that used to knock them out back in the day. It didn't look comfy then, and it doesn't look comfy now... you won't be sitting on it for long periods on your freestyle fixer though, eh. They'll be £59 a pop. 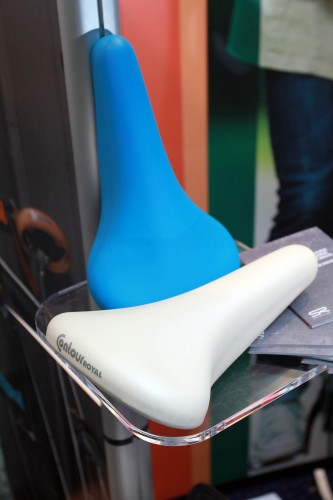 The other saddle to make a comeback is the Contour, which we were reliably informed was the saddle du choix of the peloton before the appearance of the Rolls. It's an interesting shape, full and deep sided (of course) with little dimples where your sit bones rest. It'll definitely look the part on that restoration project you've got going on in the shed. The Microtex version will set you back £59, with a full leather version available for £89.

Much talk at CORE was concerning the tastiness, or otherwise, of Honey Stinger's organic waffle. Basically, if you like a stroopwaffel then you'll like a Honey Stinger waffle, 'cause that's what it is. Opinion was divided but at least one road.cc staffer was very excited at the prospect of seeing stroopwaffels reclassified as 'sports nutrition'. Nom indeed. Honey Stinger's full range will be coming into the UK via the nice chaps at Chocolate distribution. The Colorado-based company is part owned by that Lance Armstrong chap, and the name might give you a clue that honey features heavily in the make-up of the whole range of products, which includes energy gels, bars and chews, protein bars and, of course, the waffle. We brought a box of the products back for testing so expect to see them on road.cc soon. Except for the waffles, they didn't last the journey home. 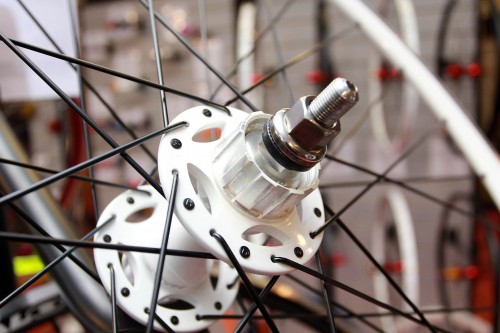 Halo are busy doing what they do best, making good quality urban gear at a decent price. The big news is that their Fix-G hub has been such a success that they're rolling it out across the whole of the fixed gear wheel range. In case you haven't seen it, the Fix-G swaps a standard screw-on for a short splined section. The splines are Shimano HG, meaning you've got your pick of a wide range of sprockets, and the hub comes wit a set of spacers that allows you to tweak your chain line to get it just right. You can even run a double cog on it if you want. It's a brilliantly simple solution and one that's been very well received in fixed gear circles. They also had a brand new high quality freewheel, it's a 72-click unit that weighs in at about £40, so it's not cheap but it looks very well made.