Core news: Up close and personal with the new Eddy Merckx EMX-7

As well as becoming the owner of one of the most advanced carbon race bikes out there, everyone who buy a new Eddy Merckx EMX-7 gets a whopping book celebrating Eddy’s career signed by the great man himself. We’d call it a coffee table book but, to be honest, there aren’t many coffee tables that could handle this mighty tome. It’s more dinner table size, or possibly lectern.

The EMX-7 takes over from the EMX-5 as Eddy Merckx’s top tier bike, although both will be used by the Quickstep team this year. There are many differences between the frames but chief among them is that the EMX-7 is made from 62-ton carbon as opposed to 50-ton carbon so, according to Merckx, it’s stiffer without losing its compliance, although it doesn’t have the same level of impact strength. 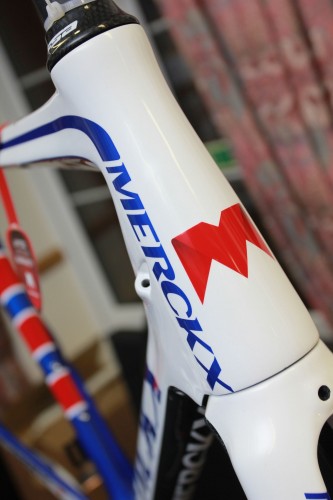 The EMX-7 comes with an integrated seat post rather than a standard telescopic seat post slotted into the seat tube, and also with a fork crown that extends backwards to slot into a recess in the frame. This increased size improves the aerodynamics and adds to the torsional stiffness that’s already extended with the use of a 1.5in diameter lower headset bearing.

The EMX-7 is available in three different colour schemes and also in a limited edition 525 version. Eddy Merckx had 525 wins in his pro career and to celebrate his 65th birthday last year, the company made him a special bike, and they’ve now made 200 more for sale. They come with full Campag Super Record groupset, Deda cockpit, Selle Italia saddle and a Lightweight wheelset, with 80 of Merckx’s most important wins listed on the back one.

Lower down the Merckx range, the EMX-3 is made from 30-ton carbon and the EMX-1 is 24-ton carbon – all the carbon models come with a smaller version of that Merckx book – while the alloy AMX-1 is the brand’s most affordable option. Priced at £995 with a full Shimano Tiagra groupset, it’s available tax-free though an employer’s Cycle to Work scheme.

Unusually for one of the smaller European brands, Merckx offer a lifetime warranty to the first owner of all their frames as long as it is registered on their website and is inspected by a bike shop once a year.

Interestingly, the guys at Merckx reckon they have some big changes planned for frame tube shapes within the next couple of years. At the moment, they’re working on a TT frame that they reckon has unique aspects in terms of both tube shape and the use of carbon, and that things will get a real shake up in the 2013 range. Intriguing.