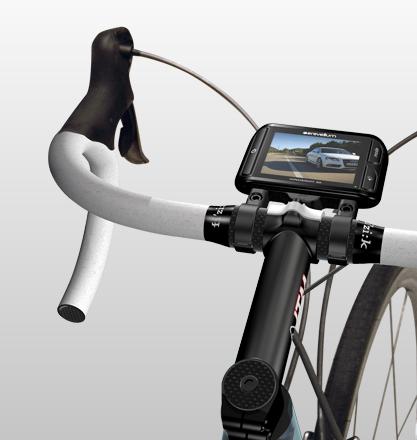 Device can also be used in conjunction with bar-mounted monitor to let you know what's behind...
by Simon_MacMichael

A designer in the United States has devised a rear-view camera that can be fitted to a bicycle’s seatpost and records footage on a continuous ten-second loop, potentially providing video evidence that could prove invaluable in the event of a collision. When used in conjunction with a handlebar-mounted monitor, it also acts in effect as a rear-view mirror for the cyclist.

Called the Cerevellum Hindsight 30, the camera has been developed over the past two years by Evan Solida of North Carolina through his company 6ix Design, and includes an accelerometer – similar to the motion-detecting software inside an Apple iPhone that governs the screen orientation – which when it detects unusual movement, such as that which happens in a collision, records the latest ten seconds of video then shuts down.

According to the product website, “With the Hindsight 30, you will always be able to know what is approaching from behind, whether a car or an opponent initiating a break-away,” although we’re pretty sure the UCI might have a word or two to say on that second point.

The camera housing, which can be attached to standard and aero seat posts, also incorporates a red rear LED light, which can be set to steady on, flashing, or off.

There’s also a front LED light on the monitor unit, which has a 3.5-inch transflective LCD screen which can be viewed in sunlight and also has a light for viewing in poor visibility.

Battery life is claimed to be 13 hours and the product will be shown at Eurobike this autumn.

While the camera's benefits in terms of potentially recording accidents are obvious, when it comes to acting as a replacement for bar or helmet mounted mirrors, or just a good, old-fashioned look over the shoulder, we do wonder however whether the screen itself might just provide too much of a distraction while you're out and about on the bike

Solida has also integrated the camera into the frame of a concept bike he has designed, called the Rael, which also incorporates a patented shifting and braking system that in effect sees the levers turned upside down, as featured on the website Bicycledesign.net.

Explaining the thinking behind the repositioning of the levers, Solida says: “When you’re riding on normal hoods, your index finger (longest and most powerful digit) is located near the pivot for the lever. That’s far from ideal. You can generate the most braking power by riding in the drops with your index finger near the tip of the lever blade, the farthest point from the pivot.

“I flipped things around so that you have the most modulation control while riding on the “hoods.” Also, the “drops” can be angled outward to the user’s discretion. One more benefit is that the “drops” are ergonomically shaped like a pistol grip, fantastic for tough sprints.”