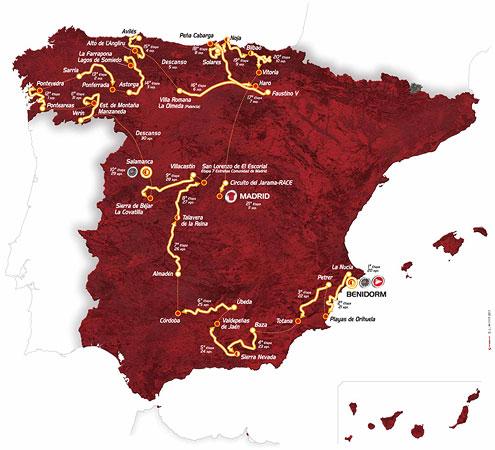 A night-time team time trial in Benidorm, ten mountain stages including six summit finishes, one of them on the fabled Anglirú, an individual time trial in the medieval university city of Salamancs, a return to the Basque country for the first time since the 1970s and the traditional finish in Madrid – those are the highlights of the 2011 Vuelta, the route of which was unveiled yesterday.

The return to the Basque country is particularly significant, with confirmation of the Vuelta’s route coming in the week that separatist terrorist group ETA announced a permanent ceasefire, with the threat of terrorist action being the reason the race has stayed away for more than three decades.

No edition of the Tour de France is complete nowadays without the sight of orange-clad Euskaltel-Euskadi fans thronging the peaks in the Pyrenees, and although the Vuelta won’t be visiting those mountains this year, at least they’ll have the chance to cheer on their heroes in their home Grand Tour, including on the potentially decisive Stage 20 from Bilbao, the Basque region’s biggest city, to Vitoria, its capital.

Two of the six summit finishes take place on roads never visited by the Vuelta before, both in the northwest of the Iberian peninsula - the Estacion de Montaña Manzaneda in Galicia, and La Farrapona in Asturias – while perhaps the most anticipated stage will see the GC contenders fight it out on the Anglirú on Stage 15 as the race enters its final week.

First included in the Vuelta as recently as 1999, the last time it featured in the race was in 2008 when Alberto Contador took the stage on his way to sealing overall victory and complete his hat-trick of Grand Tours.

Given the ongoing doping case against him, it’s unlikely he’ll be there this year, but stranger things have happened – if, for example, he were given a token three-month ban, the Vuelta may prove a more tempting target than the Tour de France, given the extra preparation time, although such a short ban might see the UCI appeal it to the Court of Arbitration for Sport (CAS).

However, that could create a similar situation to 2009, when Alejandro Valverde rode to victory with his own hearing at CAS looming, resulting in his eventual ban, although he was allowed to keep his Vuelta title.

The other three summit finishes take place on the San Lorenzo del Escorial, Valdepeñas de Jaen and Peña Cabarga, the latter being where Euskaltel-Euskadi’s Igor Anton came to grief as he crashed badly during last year’s race while wearing the leader’s red jersey, forcing his withdrawal, a moment highlighted – rather melodramatically – on the video of the key moments of the 2010 edition on the Vuelta website (second video down).

Anton was one of the home riders attending yesterday’s presentation in Alicante, others including Carlos Sastre, Samuel Sanchez and Jouaquin Rodriguez, but not last year’s runner-up Ezequiel Mosquera, currently suspended after failing a drugs test during the 2010 race. The former Xacobeo-Galicia rider was at the presentation of his new team, Vacansoleil, earlier this week, but the investigation against him continues, and he admitted that if he does receive a ban, that may well end his career.

The opening team time trial amid the skyscrapers of Benidorm, nicknamed “The Manhattan of Spain,” repeats the evening format successfully used last year in Seville, won by HTC-Columbia to put Mark Cavendish briefly into the red jersey which would ultimately be won by Vincenzo Nibali of Liquigas, the team that put in the second fastest time that day.

The Sicilian was at also at yesterday’s presentation in Alicante and while the Giro d’Italia is his main goal for 2011, he confirmed that he’ll also be aiming for a second successive Vuelta win, possibly accompanied by team-mate Ivan Basso, who is targeting the Tour de France.

The individual time trial in Salamanca, a regular stage host town for the Vuelta, takes place just before the midway point of the three-week race, giving any of the GC contenders who lose time there ample opportunity to pull it back during the remainder of the race.

That contrasts with last year, when HTC-Columbia’s Peter Velits put in a storming ride on the Stage 17 individual time trial in Penafiel, which went a long way to his securing the third place on the podium in Madrid behind Nibali and Mosquera.

With the World Road Championships in Denmark coming immediately after the Vuelta, the sprinters, including last year’s green jersey winner Mark Cavendish and former team-mate Andre Greipel, points winner the previous year, will be looking to fine-tune their form.

While many of the remaining stages described by the organisers as “plain” are bumpy enough to enable a breakaway or late solo attack to stick, there’s also the usual array of stages that are almost certain to end in bunch finishes, which could make for a thrilling points competition all the way to Madrid.

The full itinerary is shown below, and further details, including stage profiles and a profile of each stage, can be found on the Vuelta website.

1
Cyclist dragged 20 metres along road by partially sighted motorist still battling with insurers
2
Transport boss tells drivers: “If you’re in a car you’re part of the problem”
3
"The sight of the MAMIL can be off-putting for those looking in from the outside," says Ned Boulting
4
Video: Explosion rocks subway after train collides with bicycle thrown on tracks
5
Not so Near Miss of the Day 640: Hot chocolate thrown over cyclist from moving car
6
BMC updates URS gravel bike line-up with front suspension
7
Rapha to move to new headquarters in north London
8
“I just didn't feel safe in cycling anymore” – Tony Martin opens up on why he’s retired