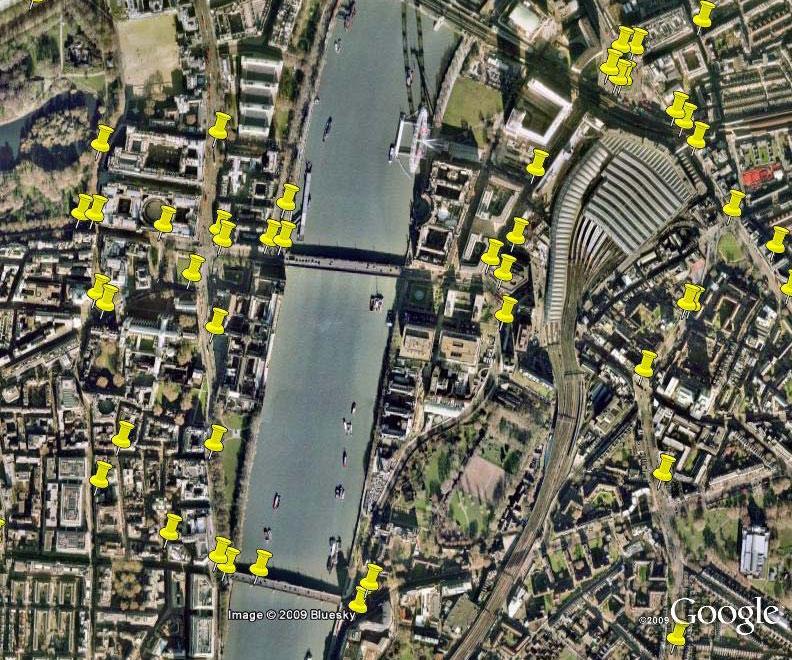 Move allows creation of at a glance guide to the nation's cycling blackspots...
by Tony Farrelly

Data released by Government agency Directgov's Innovation blog has lead to the creation of a map of all the reported accidents involving bicycles in the UK for the years 2005, 2006, and 2007. If you have Google Earth installed on your machine you can download the KML files of the data and check out the blackspots in your area.

The police define an accident as follows:

Accident: Involves personal injury occurring on the public highway (including footways) in which at least one road vehicle or a vehicle in collision with a pedestrian is involved and which becomes known to the police within 30 days of its occurrence. The vehicle need not be moving, and accidents involving stationary vehicles and pedestrians or users are included. One accident may give rise to several casualties. “Damage-only” accidents are not included.

When the police record an accident they also record its grid reference data which can then be turned into latitude and longitude readings which can be plotted accurately on a map.

Possibly the most immediately useful aspect of data when applied to a map is that it enables easy identification of accident blackspots – there may well be plenty of anecdotal evidence that they exist but a map gives clear at-a-glance evidence to members of the public. For instance one commenter at the timesonline lab blog notes that most of the eight incidents in Richmond park over the period mapped were by the main gate.

Ideally traffic engineers should also be able to quickly identify the types of location where accidents are more likely to occur: certain sorts of junction or street layout, or furniture lead to more accidents and require remedial action. They probably have the raw stats in some form already.

Not surprisingly most of the incidents mapped occur in large cities and highly populated areas - there are none on the Isle of Skye for instance. And while an average of 16,000 incidents a year is too high it needs also to be viewed in the context of the vast numbers of people now riding bikes. A map of accidents involving motor vehicles would be massively more crowded - indeed the size of that particular data set may well be one of the factors in Directgov releasing the cycling data instead.

To put these figures in a more general context, The Department for Transport's Road Casualties Great Britain 2007: Annual Report is an interesting read. If the 16,000 cycling accidents per year average mentioned above is compared to the total number of casualties of all severities on Britain's roads in 2007, cycling-related accidents make up roughly 6.5 per cent of the 247,780 total.

Looking at the stats by mode of transport it is clear that way ahead in the fatality stakes, and perhaps prompting the current series of adverts warning drivers to look out for them, are motorcyclists, followed, but not closely, by cyclists. Figures for 2006 show that motorcylists had 190 fatalities (per 100 million passenger journeys) compared to 12 cyclists, 3.7 pedestrians and 3.3 fatalities of those travelling by car.

For even more detailed stats, have a look at the Department of Transport's factsheet on pedal cyclist casualties in road accidents: 2007

Thanks to Tom Taylor for the KML files.