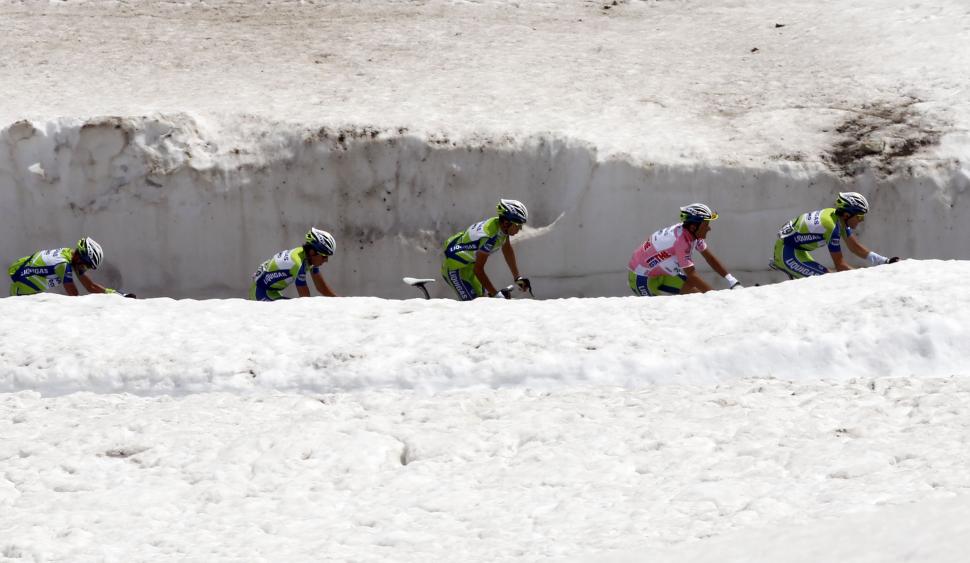 Liquigas-Cannondale manager Roberto Amadio has confirmed that the Italian team’s 2011 campaign will be built around a two-pronged assault on the Giro d’Italia and Tour de France, as it seeks to repeat a highly successful 2010 that saw its riders Ivan Basso win the Giro and Vincenzo Nibali claim victory in the Vuelta.

Speaking to Italian sports daily La Gazzetta dello Sport, Amadio was quick to rebuff suggestions that several high-profile departures from the team would weaken the squad in the season ahead.

“The departures of [Roman] Kreuziger, [Daniele] Bennati and [Manuel] Quinziato do weigh, but we’ve compensated through recruiting team players such as [Paolo] Longo Borghini and a group of quality young riders, among whom are Damiano Caruso and [Eros] Capecchi who have the right attitude for stage races. If the other teams are drawing on us it’s a reason for pride.”

He denies, however, that the emphasis on youth is a new development for the team.“To tell the truth,” he explains, “the focus on young riders has been there since the return of Liquigas in 2005. Some, like [Elia] Viviani, [Jacopo] Guarnieri and Peter Sagan have already shown themselves to be winners. We have [Daniel] Oss for one-day races and [Davide] Cimolai. The German [Dominik] Nerz has arrived from Milram and the Americans [Timmy] Duggan and [Ted] King from Garmin and Cervélo. With the Cannondale bike brand, which becomes the second named sponsor, we want to internationalise the team.”

Asked whether there was still space in the team for Franco Pellizotti, who missed most of the 2010 season after being suspended shortly before the Giro d’Italia die to irregularities in his biological passport only to be cleared by the UCI once the season was over, Amadio commented: “It’s the same situation as with Kreuziger. I’ve spoken with Franco, he has the need and the desire to try and win the Giro, after everything that happened. At Liquigas however there’s no more space for him as a leader.”

Instead, it’s the man who was called up as a late replacement for Pellizotti in the Giro, Vincenzo Nibali, who will act as the team’s co-leader, following a podium finish behind Ivan Basso in that race followed by victory in the Vuelta during September.

Speaking of the 26-year-old Sicilian, Amadio said: “He’s mature and aware of his value. In the summer, before the Vuelta, he told me ‘I’m going to Spain to win.’ Now, speaking of the 2011 Giro, he’s telling me: ‘I want to ride the Giro because I can win it.’ If the UCI’s old ranking were still in place, he’d be world number one. So I consider him as such.”

That’s not to say that Amadio’s admiration of current Giro champion Ivan Basso has diminished at all. Asked what place the 33-year-old occupied among his riders, the manager maintained that he was “the best of all of those I’ve had, for professionalism and dedication. In the explosion onto the scene of Nibali, there is much that is to Basso’s merit.

“We’ll leave the possibility that he’ll ride the Giro open until Liège–Bastogne–Liège. But it’s clear that at this point in his career his head is wrapped around the Tour. He’s convinced that due to the route and the way cycling is going, this is his chance. And the desire to bring the maillot jaune to Aldo Sassi’s tomb [as requested by the coach before his death earlier this month] will be an added incentive.”

Amadio insists that he has a team that can perform to the best of its abilities both in the Giro and the Tour de France, saying, “I have no doubt. Some, like [Sylvester] Szmyd and [Alessandro] Vanotti will take on the double task. At the Giro, everyone will race against us, so we have to have the strongest squad in absolute terms. At the Tour, on paper, there are also the teams of Contador [Sungard-Saxo Bank, although the presence of the 2010 winner himself is very much in doubt with his clenbuterol case still to be resolved] and Schlec [the Luxembourg Pro Cycling Project].

Notwithstanding Sassi’s death from a brain tumour earlier this month, Amadio said that the team’s collaboration with the Mapei Centre that Sassi founded would continue. “Among the reasons for Basso’s arrival at Liquigas was the fact that he was followed by Sassi. So Ivan will continue to attend the Mapei Centre. And I hope that [Mapei’s owner] Doctor Squinzi will come back into cycling in some manner, We need him.”

As to how to go about attracting sponsors in a sport in which negative publicity can all to often rear its head, Amadio said, “By demonstrating seriousness and organisation. Cycling remains an important means of promotion and is convenient product for return on investment. Doping is a problem that belongs to all sports and the others would do well to follow our example instead of denying that it exists. And WADA should apply the same rules: explain to me why the football and swimming world cups don’t have controls on blood?”