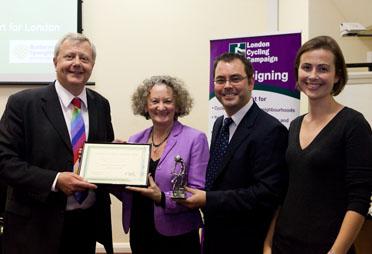 The London Cycling Campaign has announced the winners of its London Cycling Awards, designed to recognise projects and events which help the cause of cycling in the capital.

Unsurprisingly the Barclays Cycle Hire scheme receives due recognition but there are also awards for more modest projects which have contributed to increasing the profile, accessibility and safety of cycling in London.

The biggest award offered by LCC went to the project whose impact on London’s cycling landscape is difficult overstate. With a well over a million journeys already completed the Barclays Cycle Hire scheme continues to go from strength to strength and the LCC admitted that giving it the top prize was a “no-brainer.”

While the Tower Hamlets Cycling Club has been in existence for some years, in 2009 it expanded ro include pool bikes for those without their own machines and this year has been used by 350 members of which 200 were children.

The Streets of Growth takes unclaimed bikes provided by the Met Police and sees them refurbished by East London teenagers unable to afford a bike but keen to learn new skills. Once they refurbish the bikes under expert guidance, they keep them and gain accreditation in Level 1 AQA Bike Maintenance.

The borough devised a comprehensive set of initiatives to enable a
large number of the workforce to cycle including pool bikes, parking,
social rides and a newcomers’ welcome pack.

The Friday Night Ride To The Coast is a monthly guided ride starting at Hyde Park on the night of each full moon, with riders travelling to coastal towns for a slap-up breakfast.

Teddington Bike to Work Week organised two excellent events in June to spark the enthusiasm of hundreds of staff at ten workplaces.

Lorries make up just five percent of the traffic in London, but are involved in more than half the cyclist fatalities. A key strand in LCC’s 'No More Lethal Lorries campaign is driver training - putting lorry drivers on bikes, on the roads, so they can understand the conditions cyclists face, and become safer drivers.