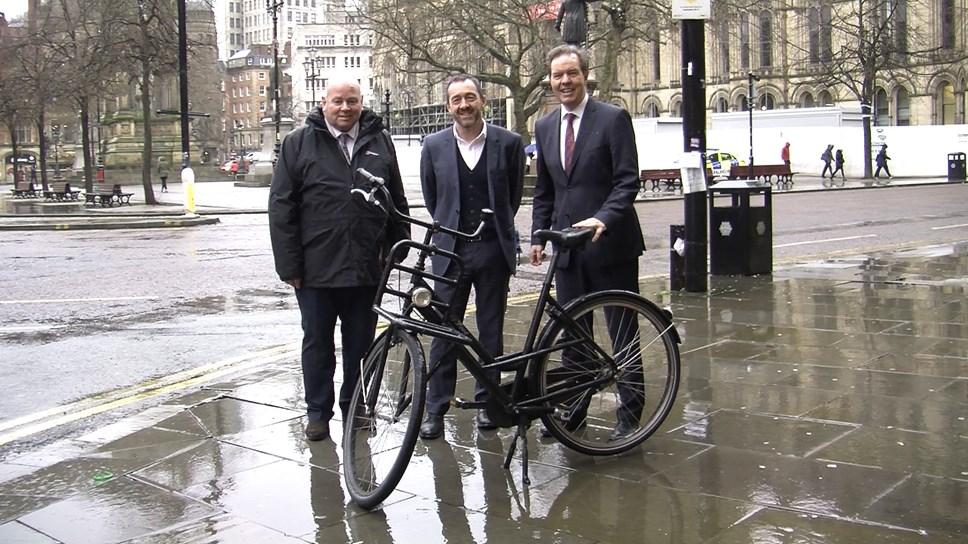 Simon Smits says “the benefits of cycling are immense”
by Simon_MacMichael

Simon Smits, the ambassador of the Netherlands to the UK, has praised Greater Manchester’s approach to making it easier and safer for people to get around the city-region on foot or by bike, saying that “the benefits of cycling are immense.” He has also offered to help make Dutch expertise available to fulfil those ambitions.

The diplomat met with Greater Manchester Mayor Andy Burnham and Cycling and Walking Commissioner Chris Boardman this week, as will as with local business leaders to find out their plans to transform transport across the area, including the Bee Network.

“The UK has huge ambitions when it comes to zero emission transport and so does the Netherlands,” he said.

“We invest a lot in the electrification of transport, both public and private, and in safe, comfortable and attractive cycling infrastructure.

“The benefits of cycling are immense: it improves people's health and it is a clean mode of transport - no air pollution and no use of fossil fuels.

“I am happy to bring organisations and businesses in the Greater Manchester area in contact with Dutch cycling experts.

“The Dutch are keen to share their knowledge and experience accumulated over decades of cycling to help improve the cycling infrastructure in this part of the UK.

“Dutch city planners and traffic experts have a wealth of expertise on encouraging cycling and making cities safer for cyclists, not just within cities but also between cities," he added.

Burnham has unveiled a five-year Our Network plan to create an integrated transport network covering all ten districts that make up Greater Manchester and which will include the 1,800-mile Bee Network that Boardman is leading.

“The Netherlands has without doubt set an example when it comes to creating cycle-friendly towns and cities, and today has been a chance for us to learn from the Dutch experience and share our own vision for an integrated transport network throughout Greater Manchester,” Burnham said.

“By 2025 we want to see 10 per cent of all journeys being made by bike, and we’re working to ensure that our city-region’s walking and cycle routes are as safe and accessible as possible for everyone who’s able to get out there.”

He added: “This isn’t just about switching from cars to bikes and cutting harmful emissions – it’s also about what we want our towns and cities to look like, and how we look after our public spaces. It’s a conversation that we need to be having, and Greater Manchester should be at the forefront.”

Boardman said: “The Dutch are known for their commitment to active travel and they boast some of the biggest cycling cities in the world.

“We know that truly normalising cycling and walking will take time; as well as infrastructure, a complete culture shift is needed, so having strong allies and insight from countries that have already seen success, is invaluable.

“The ambassador has offered key learnings that we can apply to our programme here in Manchester and has given really positive feedback on our plans and ambition which is very encouraging.”