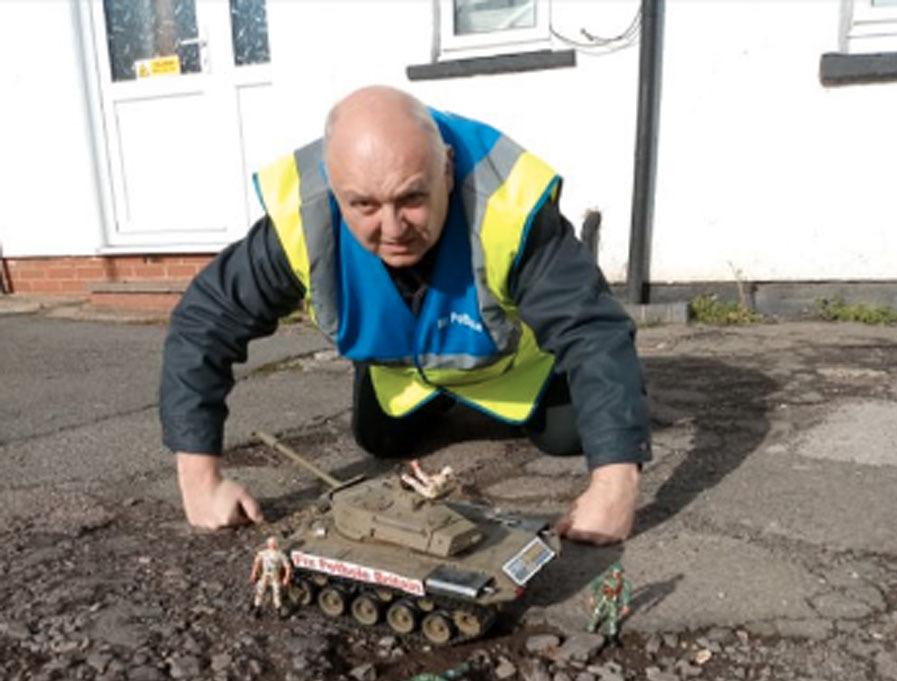 To mark the day we'd all rather wish didn't exist, we've spoke to Britain's foremost anti-pothole activist about the state of our roads.....
by Jack Sexty

If there's one thing that motorists and cyclists agree on, it's that potholes are an absolute pain in the backside - in fact, the results of a survey released by Tarmac today found that potholes were the number one annoyance for road users.

One cyclist a week killed or seriously injured due to potholes

A man who knows more than most about our battered roads is Mark Morrell, who since adopting the Mr Pothole moniker back in 2013 has reported thousands of road defects, formed his own pressure group and appeared on national television in his battle to get councils and the government to act.

Today Mr Morrell is out on the streets of London in a 'Pothole Tank', designed to raise awareness of the problem blighting Britain's roads to fight the 'war' against potholes. Before this he took the time to answer a few of our questions, and give road.cc readers some handy tips for reporting potholes on the roads...

road.cc Where did Mr Pothole come from, and when did your campaigning begin?

Mr Pothole I starting complaining about dangerous potholes to my local council back in March 2013; they did nothing about it so I chased them. The attitude I got was not acceptable, something along the lines of "we have had people complain before" thinking you are going to go way... well, they got that one wrong! I had to contact the police to get emergency repairs carried out, and I set up a Facebook group. The next thing I knew the local press were calling me Mr Pothole and I appeared on a Channel 5 documentary soon after.

road.cc Was there a particular incident that prompted you to take action?

Mr Pothole Having studied the pothole crisis on our roads, I made a number of recommendations to the Transport Select Committee's inquiry into local roads; an inquiry I and others were pushing for to highlight the poor condition of our roads.

road.cc What do you think needs to be done to repair Britain’s roads?

Mr Pothole The biggest issue is a lack of funding and long term investment plans, it's decades of under-funding and cheap repairs that has led to the current situation. The wearing surface on most carriageways will last 20 years before it needs replacing; yet much of our road network is around 60-70 years old now. We need to have a proper resurfacing programme in place.

Better quality works with good materials and training is another area for improvement, as cheap pothole repairs don't last.

road.cc How big of a problem do we have compared to other countries?

Mr Pothole We are number 27 in the world in terms of road quality according to the World Economic Forum's Road Infrastructure report, yet we are in the top six richest nations. Countries like Spain, Cyprus, Chile and Finland are all rated better; we should be at least in the top 10. Poorly maintained roads are costing the UK economy £5 billion a year, so investing an extra £2 billion would make financial sense.

road.cc What is the quickest and easiest way for cyclists to report potholes?

Mr Pothole It's best to report any potholes directly to the highways agency. You can also report via the Fill That Hole app or FixMyStreet, which are both national reporting systems.