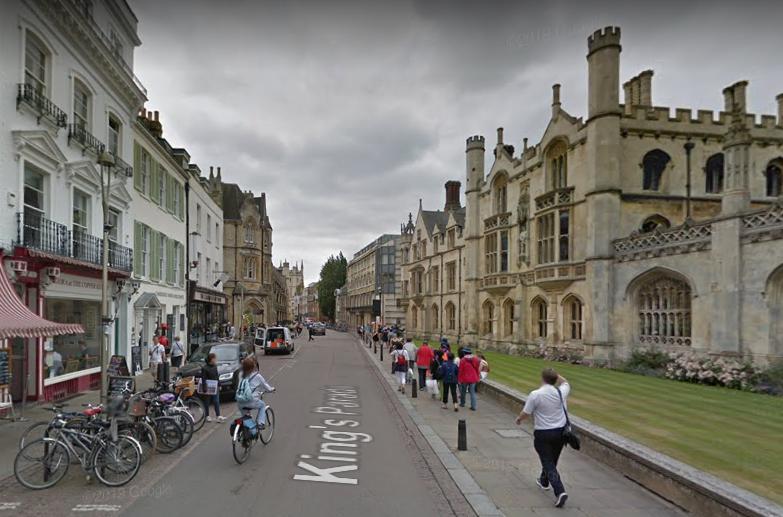 Cambridge City Council trial at King's Parade goes live next month - but concerns have been expressed on effect on cyclists...
by Simon_MacMichael

One of the UK’s busiest streets for cycling – King’s Parade in Cambridge – is set to have anti-terrorism barriers installed to prevent motor vehicles from accessing it during the daytime despite concerns about their impact on cyclists.

The barrier and other safety measures will become operational from 13 January under an 18 month trial being conducted by Cambridge City Council in partnership with the Greater Cambridge Partnership and Cambridgeshire Constabulary.

The street is home to shops and restaurants as well as Cambridge’s most famous building, King’s College Chapel, and is busy with locals and tourists throughout the year, as well as students heading to and from the nearby colleges.

Cambridge City Council says that the first phase of the security measures, drawn up following consultation with Cambridge University, local businesses and other stakeholders, will involve a temporary motor vehicle barrier being installed across King’s Parade, just north of the junction with Bene’t Street.

The three-metre-wide, swing-gate barrier will be flanked either side by a pair of weighted security barges, similar to those now in place on a number of bridges in London. There will be a gap on the King’s College side for cyclists to pass through.

While motor vehicles will be prevented from access to King’s Parade while the barrier is in place from 9.30am-7pm each day, there will be access for pedestrians, cyclists, emergency services and for special events.

Measures will also be introduced to slow motor vehicles on the approach to King’s Parade, such as narrowing the road on Trumpington Street.

The trial will be assessed before proposals for a permanent barrier or method of closing the street are drawn up.

Councillor Lewis Herbert, the Labour leader of Cambridge City Council, said: “As most people would agree, Cambridge is a special place, but sadly, in a time when the UK terror threat level is substantial, the benefits of its global profile are not without risks.

“The tragic loss of innocent lives in the London Bridge attacks serves as a further reminder of the need to take appropriate measures to protect people.

“We have recognised this and that is why we sought police advice about King’s Parade, which is our busiest single visitor destination.

“Now that we have received that advice we must act on it in a proportionate way to do all we can to minimise the risks to public safety and help people to move around the city centre as easily as possible.

“We understand that some of the businesses on King’s Parade will feel inconvenienced, but this is a temporary solution and we will continue to discuss the scheme and any potential permanent measures with them.”

He added: “An added benefit of the temporary barrier will be that city residents and thousands of visitors attracted to King's Parade will have a more relaxed space to wander beside King's College, particularly at busy times.”

The proposals were approved by Cambridge City Council’s strategy and resources committee in early October, although some councillors expressed concerns about the impact on cyclists.

Nichola Harrison, Liberal Democrat councillor for Market ward, said at the time: “I have significant concerns that this barrier design is simply not suitable for a road like King’s Parade. Cyclists will not have sufficient space to travel safely and this will impact on pedestrians too.”

However, councillor Richard Robertson, executive councillor for finance and resources, said in response: “Cities across the UK with similarly busy pedestrian areas have already installed such barriers including Manchester and Birmingham.

“For cyclists there is one gap, just like there is already for cyclists wanting to enter Sidney Street from St Andrews Street

“Because of the University cycle traffic, particularly early morning, it is planned to keep the vehicle barrier open during the morning peak time for cyclists,” he added .”At this time the potential security risk is also much lower because there are far fewer pedestrians in the area then.”