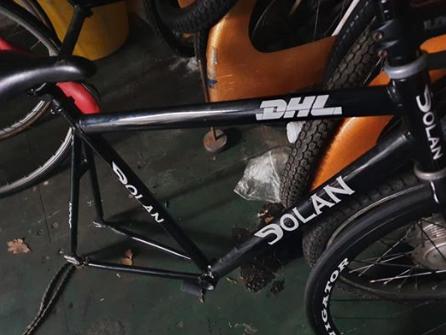 A Scunthorpe cycling club says that young people will miss out on the chance to try cycling as a sport after three Dolan track bikes and a derny were stolen from a container unit in what it believes was a targeted theft.

Quibell VeloSport Club, which is based in Quibell Park, says it is unable to pay for new bikes to replace the ones that were stolen, reports the Grimsby Telegraph.

They were stolen along with other equipment from a container unit near the park’s velodrome at some point last week, with thieves using a saw to gain entrance.

It is unclear exactly when the theft took place because the track was closed for several days due to the weather, but it is believed to have happened at some point between the night of Wednesday 1 December and the morning of Saturday 14 December.

Becky Rose Wood, a coach at the club, believes it was a targeted theft.

"The equipment must have been taken to order as none of the other containers were touched,” she said. “The thieves even took all the tools like spanners and allen keys, so we can't even repair the other bikes.”

She described the kit as “irreplaceable – we just don't have the money to buy new bikes or a new derny.

"This will mainly affect people getting into the sport who haven't been able to buy their own equipment,” she continued.

"We were even planning to work with local schools for sports days next year to give kids an opportunity to get involved. We were just about to approach schools, but that won't happen now."

"We are considering launching a GoFundMe page to try and buy at least one of the bikes back," she added.

"We've had a lot of support from other cyclists who want to contribute to the club."

A Humberside Police spokesman said: "We are investigating a burglary at Quibell Park on Brumby Wood Lane in Scunthorpe that happened between Wednesday, December 11 and Saturday, December 14.

"Intruders broke into a storage container and stole a number of bikes and equipment.

"Anyone with information about the burglary or the whereabouts of the stolen items is asked to call us on 101 quoting reference 16/135403/19."