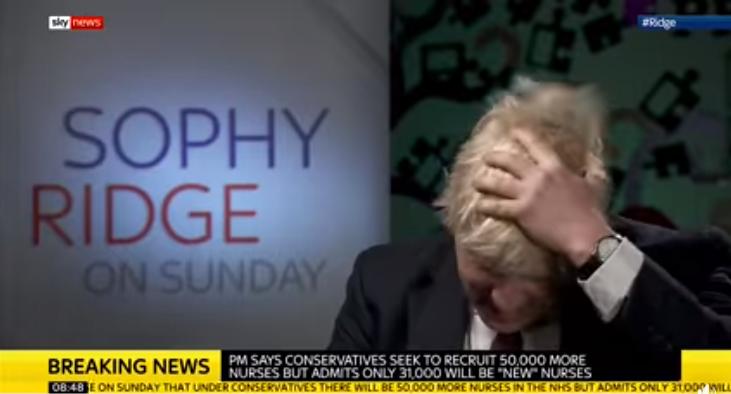 Prime Minister has excruciating "Fields of wheat" moment during interview with Sophy Ridge of Sky News...
by Simon_MacMichael

Four days before the general election, Boris Johnson has said that the naughtiest thing he has ever done (and is prepared to admit) is cycling on the pavement.

The Prime Minister made the claim when he was interviewed this morning by Sophy Ridge on Sky News. You can watch the pair's exchange here.

The journalist’s question echoed a similar one in 2017 in which the then occupant of Number 10, Theresa May admitted to “running through wheat fields” as a child.

Ridge had put the same question to Johnson last time she interviewed him, but on that occasion, he declined to provide a response. Asking him today if he now had an answer or whether it was another “broken promise,” he said, “Oh no, not this again.”

Addressing his advisors in the studio, he said: "You need to interrupt this now!" but Ridge told him he had had "lots of time to think about it."

Johnson tried to swerve the question, making a reference to what has become his catchphrase during the general election campaign. "I did promise to think about it, but I've been so busy trying to get Brexit done ... naughtiest thing I've ever done? God ..."

He told Ridge, "Look I think ... Sophie ... I'm going to have to come up with ..."before pleading with his advisors for help again.

"Come on folks help me out here!" he said, adding, "What's the naughtiest thing you think I've done?"

Finally, he gave Ridge an answer. "I think I may sometimes when I was riding a bicycle every day, which I used to do, I may have sometimes not always obeyed the law on cycling on the pavement," he admitted.

“But I want you to know,” he added, raising his voice and wagging his finger to emphasise his point, “I firmly and strongly disapprove of people who cycle on the pavement.

“I think it’s wrong and I feel bad about it, but I might sometimes have scooted up onto the pavement rather than dismounting before.”

The Sky News broadcaster, rather incredulously, replied: "The naughtiest thing you've ever done is to cycle on the pavement?"

There were plenty of suggestions on social media about other answers that Johnson could have given, and during the same interview Johnson was forced to acknowledge that the much promised figure of 50,000 new nurses for the NHS was in fact incorrect and that the true number was 31,000.

So pavement cycling, it seems is ‘naughtier’ than deliberately misleading the electorate on one of the key issues in what is seen as the most important general election of the post-war period.

The Mirror, meanwhile, has come up with its own list of Seven things Boris Johnson has done which are worse than cycling on the pavement.