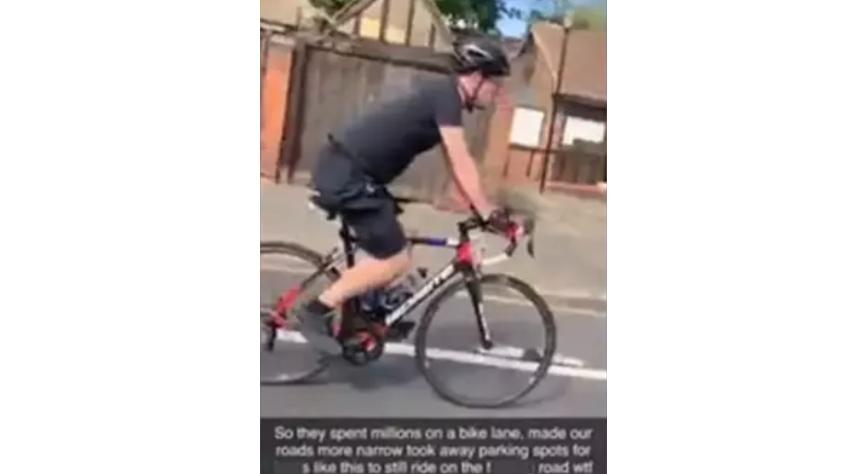 Cyclist was riding alongside Mini Holland bike lane in Enfield - quite legally, as Met pointed out
by Simon_MacMichael

Police in Enfield, north London, have reiterated on social media that cyclists are not obliged to use cycle lanes after a video appeared on Facebook with the passenger of a car shouting at a rider to “Use the f*cking bike lane!”

The passenger adds: “They spent millions on the bike lane. F*cking use it, you mug,” while the cyclist continued to ride along, ignoring the rant.

The video was filmed on Monday on Green Lanes and uploaded to a Facebook page called Spotted Enfield, with the comment “£42 million well spent, indeed.”

The Metropolitan Police Service in Winchmore Hill, which Green Lanes runs through, wrote yesterday on Twitter: “Sadly it has come [to] my attention that there were two road rage incidents yesterday evening on Green Lanes.

“In both incidents motorists laid into cyclists for not being in the cycle lane. One you can view in Spotted Enfield.

“Kudos to the cyclist for trying his best to ignore the driver’s abuse!

“In the second incident a bus driver laid on his horn for a very long time behind the lady riding in front.

“Please think of the cycle lanes as a safe space for insecure cyclists and children.

“Not ALL cyclists will use them all the time and that is their right.”

Rule 63 of the Highway Code says “Use of cycle lanes is not compulsory and will depend on your experience and skills, but they can make your journey safer,” and often faster-moving cyclists will avoid them particularly on routes with many side roads, as is the case with Green Lanes.

That £42 million figure mentioned on Facebook refers to the total amount being spent under Enfield Council’s Mini Holland scheme after it won £30 million in funding from Transport for London.

As with a similar scheme in neighbouring Waltham Forest, the project met with strong opposition from some locals.

However, as this article from Clare Rogers of Better Streets for Enfield and Enfield Cycling Campaign explains, people opposed to the initiative indirectly helped highlight its benefits.