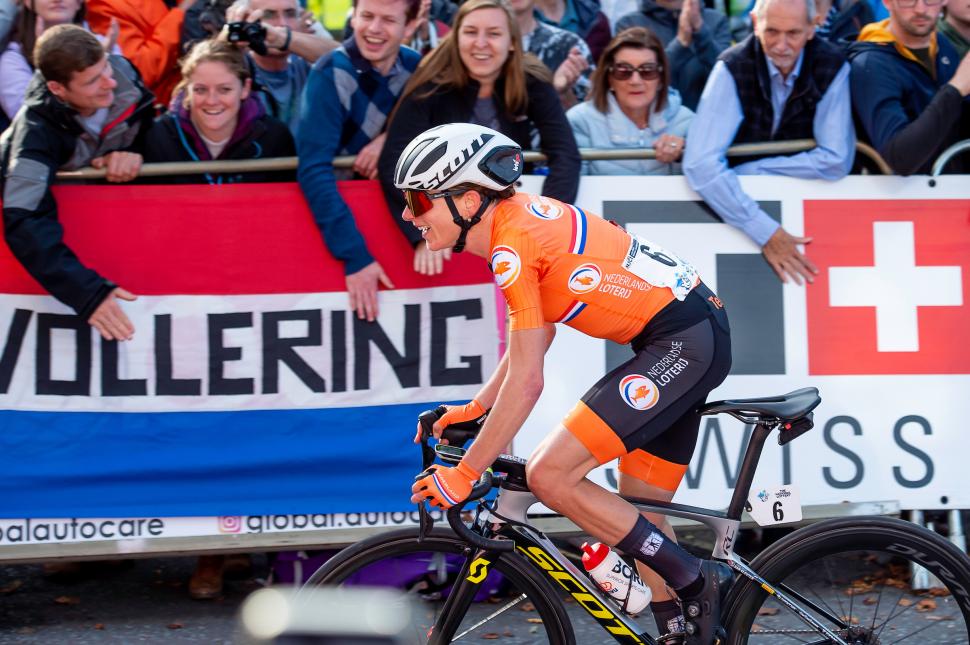 Annemiek van Vleuten has reacted to Amaury Sport Organisation's (ASO) decision to bring La Course back to Paris by branding the race “nothing more than a criterium.” The road world champion feels the move is “a step back.”

"The seventh edition of La Course by Le Tour de France powered by FDJ will take the world's elite back to the Champs-Élysées, where it all began with Marianne Vos sprinting to the win in 2014," said ASO in a press release last week.

After three editions on the Champs Élysées, La Course moved away from the French capital. Van Vleuten herself won both stages in 2017 – a summit finish atop the Izoard and a somewhat experimental handicap pursuit race the following day that was contested by the top 20 finishers on stage one. She also triumphed in 2018 after a solitary road stage that finished on the Col de la Colombière.

This year, La Course comprised five laps of a hilly circuit in Pau and covered 121km. It was won by Vos.

Speaking to NOS, Van Vleuten expressed disappointment at the return to Paris in 2020 and implied that the format of the event diminished the Women’s WorldTour.

"Have I heard La Course is in Paris?" she said. "To my disappointment, yes. This is a step back. It is now nothing more than a criterium. While it is still known as a WorldTour competition, for the men criteriums are not included in the WorldTour."

The organisation later claimed that it was looking into launching a major women's race which "would be to women's cycling what the Tour de France is to men's cycling.”

However, a spokesperson said that there could not be a women's Tour de France at the same time as the men's Tour because it would be logistically impossible.

Dame Sarah Storey was among those to disagree.

“No one is saying it’s easy,” she said. “Logistically holding both a men’s and a women’s Tour at the same time is a real conundrum. Do you run the stages on the same day? Over the same route?”

“I think you can. To me it makes sense to use the same infrastructure; the fact that everything – every village, every road – is already shut down for the entire day. Everything is already in place.”

She added that at present La Course felt like “a token gesture”.

Van Vleuten said that she was not asking for a women's Tour de France of 21 stages, but simply an event more challenging than a flat circuit race.

"I don't need a multi-day La Course, but a tough stage would be nice," she said. "There are so few WorldTour races in which we go into the mountains. At this La Course I get the idea that they were like, 'Oh yes, we have to organise La Course as well, let's do it in Paris'."