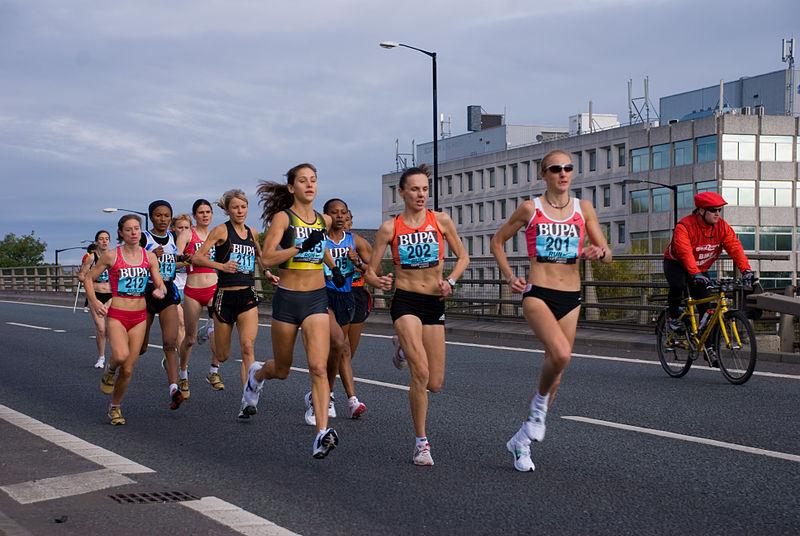 Betsy Andreu, who played a key part in the downfall of her husband Frankie’s former team-mate Lance Armstrong, has thanked Paula Radcliffe for confirming what she had been told – that the women’s marathon world record holder was considered by some to be “the female version” of the disgraced cyclist.

Andreu had asked Radcliffe whether she was the British athlete who four years ago threatened to sue The Sunday Times over an investigation it was conducting into allegations of blood doping against British athletes.

On Tuesday evening, BBC News sports editor Dan Roan tweeted video of a segment of an interview by the channel’s broadcaster Gabby Logan with Radcliffe at the IAAF World Athletics Championships in Doha, Qatar.

"We talk about how much money has gone into (this investigation)...i think USADA were maybe trying to regain face after the Coleman fiasco.."
Wonder what the US Anti-Doping Agency will make of Paula Radcliffe's take on their successful pursuit of the banned Alberto Salazar pic.twitter.com/IQnzRSgBTX

Logan had asked Radlciffe her thoughts about the four-year ban handed to the athletics coach Alberto Salazar following his four-year ban by the United States Anti-Doping Agency for "orchestrating and facilitating prohibited doping conduct."

In response to that video, Andreu asked Radcliffe whether she had been the athlete who, in an August 2015 Sunday Times story under the heading, A dozen top British athletes have recorded abnormal blood scores, threatened to sue the newspaper. Radcliffe confirmed that she was.

I did say that.l was in a distressed state of shock at what they were threatening. I truly admired Walsh’s & your fight that exposed Lance for the bully and fraud he was. Now they were going to run a false, damaging story and I knew I was completely innocent.

Thank you for answering at least this truthfully. I was always told you were the female version of Armstrong. Thanks for confirming.

The Sunday Times story was written by the newspaper’s Insight investigative reporting team, which said that it was not naming the athlete – who insisted they had “never cheated” – “because the source who leaked the doping data requested that athletes who had never been banned for cheating should be kept anonymous.”

The report added: “On three occasions during their career the athlete’s test results were so ‘abnormal’ that there was only a one in a thousand chance that they were natural.”

The newspaper listed a number of events where medals were under suspicion and, separately, the championships they related to. While the data related to all countries and not just Great Britain, the lists included both the marathon and the 2005 Helsinki IAAF World Athletics Championships, where Radcliffe won gold.

It said that it met the athlete in a hotel lobby to discuss the findings, adding: “In reference to this newspaper’s long-running legal battle with the disgraced cyclist Lance Armstrong, who was obliged to repay libel damages after admitting he had cheated, the athlete said: ‘You print it and I sue you [and] you won’t be getting any money back in future like Lance Armstrong — I promise you that’.”

In November 2015 UK Anti-doping, which had received Radcliffe's blood test history from the IAAF, said it had “come to the same conclusion as the IAAF review that there is no case to answer.”

Salazar’s ban relates to when he headed up the Nike Oregon Project, where Mo Farah trained during 2011-17, the period when he won four Olympic gold medals. Radcliffe remains an ambassador for Nike, and her husband Gary Lough, who was her long-time coach, now coaches Farah, potential conflicts of interest that were not acknowledged during the BBC interview on Tuesday.

Radcliffe, who at times appeared uncomfortable, told Logan that Salazar had “overstepped [a] line.” She also suggested that lack of sanctions against individual athletes meant that they were not guilty of doping.

She said: “We've all talked about in the past about how Alberto, in particular, will push it right up to that line. He's been very conscious of trying to find out where the limits lie and how close he can push it to get those last little bits of gains to compete with athletes that, in his mind, in other parts of the world, are really cheating. He's overstepped that.

“He probably should hold his hands up and say, 'I did, I overstepped. The rules were broken, I will now take the punishment for that'.

“Because no athletes have been sanctioned, have real anti-doping [rules been] transgressed by athletes? I don't think so. Otherwise we would have seen athletes banned at this point."

“The athletes themselves have done nothing wrong at this point.”

The 45-year-old also insinuated that USADA’s investigation had been motivated by Chris Coleman, who won the men’s 100 metres at Doha, escaping a potential two-year ban for missing three anti-doping controls within 12 months due to a technicality.

The inference seemed to be that by banning Salazar, the agency was trying to save face – even though its investigation into him had lasted four years.

Radcliffe said: "We talk about how long this investigation has gone on, how much money has gone into it, because people were waiting for something big.

"I think USADA thought it was something big, I think USADA are trying to maybe regain a little bit of face also for the Coleman fiasco and everything that's gone on.

"In going with this, they've maybe been thinking that it's something along the lines of a Lance Armstrong – which was huge.”

Armstrong, who was also sponsored by Nike during the peak years of his career, received a lifetime ban in 2012 and was stripped of results including his seven Tour de France titles he had won between 1999 and 2005.

Frankie Andreu admitted in 2006 that he had taken EPO when riding with Armstrong at the 1999 Tour de France and subsequently provided testimony to the USADA investigation into the US Postal Service team.

In a 2005 court case, Betsy and Frankie Andreu both testified that they had been present in a hospital room in 1996, when Armstrong was receiving treatment for testicular cancer, that he had admitted to doctors using performance-enhancing drugs, including EPO.

Armstrong won that case, but would finally admit to doping in January 2013, three months after he was sanctioned.

Today, he posted a response on Twitter to Roan’s post of the Radcliffe interview … a pair of eyeroll emojis.

1
Council has "no intention to enforce" parking restrictions in segregated cycle lane where cars are parked bumper to bumper
2
Near Miss of the Day 521: Close pass ... by a police van (plus how it all went a bit Kafkaesque afterwards)
3
Bike at bedtime: Cotic Escapade
4
Police in Forest of Dean send group of seven mountain bikers back to Wales for lockdown rule breaches
5
Boris Johnson accused of breaking lockdown with Olympic Park bike ride – even though he did not appear to break law
6
Five cool things coming soon from Kona, Wahoo, Chapeau, Galibier and Ruzer
7
The real story about Boris Johnson’s bike ride? It highlights confusion over lockdown rules
8
Geraint Thomas talks new podcast, cycling club snobbery and his new penchant for gravel bikes